If you enjoy this post on the latest news and stories in the publishing industry, I recommend subscribing to The Hot Sheet, an email newsletter for professional authors that I write and edit with journalist Porter Anderson. On Sept. 15–17, we’re offering 30% off our annual rate for new subscribers in honor of our two-year anniversary. Use code 2YR when checking out.

Traditional Publishers in 2017: Holding Steady with Print Backlist and Audio

BookScan, which tracks US book sales, recently released a report showing that print sales are still increasing this year—up by 2.6 percent compared to the first half of 2016. More specifically, retail book sales (dominated by Amazon and chain bookstores) are up 4 percent, while mass merchandising book sales (such as Walmart and Target) are down 8 percent.

Ebook sales figures are not yet available for the first half of 2017, but early reports show a decline once again. Ebooks overall have lost about $1 billion of their value as a format for traditional publishers since 2013, when they peaked at $3.24 billion. In 2016, they declined to $2.26 billion, a 16.9 percent drop from 2015.

A few of the top print books for the first half of 2017 include the poetry book Milk and Honey by Rupi Kaur (notable because it was first self-published), Hillbilly Elegy by JD Vance, The Handmaid’s Tale by Margaret Atwood, and Camino Island by John Grisham.

Of particular note: Traditional publishers are experiencing strong backlist sales and soft frontlist sales as compared to last year. Frontlist sales are new titles, so publishers are experiencing some trouble getting new titles to break out (politics may be a distraction—see this AP trend article). BookScan’s list of top 10 print books for the year includes only one title published in 2017: Camino Island by John Grisham. Half of the list was published prior to 2015. (However, the folks at Publishers Marketplace noted on Twitter that this is not atypical. Last year it was two at this time; in 2015 it was three; in 2014 it was one.) Publishing industry vet and book marketer Pete McCarthy also noted on Twitter, “Marketing backlist is the ‘Moneyball’ equivalent of trading for a veteran you know can hit. Frontlist is drafting a high school pitcher.”

Audio continues to be the darling of the industry, jumping 18.8 percent in 2016 over 2015. And in the first quarter of this year, preliminary figures indicate almost a 30 percent increase over the same quarter last year; the Association of American Publishers says this is the third year in which audio has seen double-digit growth. But it’s still a low overall percentage of the market: in 2016, downloaded audio represented 1.2 percent of the market, according to the AAP.

Barnes & Noble Does Fine on Profits, But Not Sales in Fiscal 2017

Barnes & Noble’s outlook hasn’t been a rosy one over the last couple years, and their revolving door for CEOs hasn’t helped. (The latest CEO, Demos Parneros, took his position at the helm after a 30-year run at Staples.)

The good news is that B&N met their profit goals; the bad news is that full-year sales were down 6.5 percent from the prior year. Since B&N sales encompass many media, not just books, it’s helpful to look at earnings in the book category alone. Unfortunately, the decline is about the same—6 percent—partly due to lower sales of coloring books and juvenile titles. And they expect the sales decline to continue in 2018.

In Publishers Lunch (paywall), Michael Cader summarizes how B&N management, in an investor’s call, said they would address the challenges: launch a series of tests. Cader writes, “A lot of those tests focus on store layouts, ‘starting with space productivity,’ adjusting categories that are in decline and those that are growing.” That means: look for reduced space in areas of underperformance, including the Nook and music DVDs.

Always remember that B&N’s performance is not necessarily indicative of overall book retail health. As noted above, print book sales as tracked by BookScan show that the industry is not suffering the same rate of decline as B&N. Therefore, B&N is losing share to its competitors (Amazon).

In an article worth every author’s attention as B&N struggles, Nathan Bransford interviews Mike Shatzkin, who spells out the grave impact the loss of B&N could have on trade publishing, which was built on the ability of big publishing houses to put books on shelves. “That’s what they can do that authors can’t do for themselves and, up until now, Amazon couldn’t do for them either,” comments Shatzkin.

Starting with the premise that B&N sells two-thirds of the books sold through bookstores in the US, Shatzkin’s points include:

Amazon Probably Has About 70 Percent of the Ebook Market

Earlier this year, Michael Cader of Publishers Marketplace published a four-part series on the state of the publishing industry as told through various statistics. In that analysis, he offered the following market share analysis for ebook retailers:

If you look only at the universe of Amazon ebook sales, Cader believes that self-published work constitutes about 40 percent of unit sales. However, he also estimates that publishers capture about 80 percent of the ebook dollars because of their higher pricing. 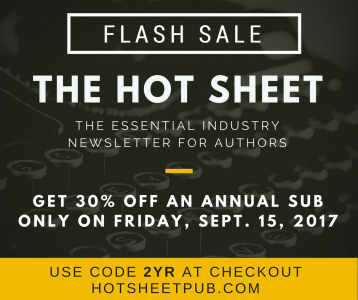 Cader also shows that self-published work accounts for about 60 percent of Kindle Unlimited reads and other borrows. The remainder is made up of titles from Amazon Publishing and the Kindle First promotional program (which offers Amazon Publishing titles only). Cader writes of Amazon’s proprietary e-reading programs, “[They] could be moving more units than all of the competitive stores together. It also means that Amazon Publishing … is on its own close to the size of the entire non-Amazon market.”

If you enjoyed this post on the latest news and stories in the publishing industry, I highly recommend subscribing to The Hot Sheet.