Note from Jane: Today’s guest post is from Andrea Dunlop (@andrea_dunlop), formerly a publicist at Doubleday.

I wasn’t the first aspiring writer to move to New York to work in book publishing in the hopes it would make my dreams of becoming an author myself come true. Exactly how labyrinthine the path would be (just three agents, a round of MFA applications, and a cross-country move later) was a bit of a surprise, but everything I learned in my first real job as a publicist at Doubleday—as well as what I learn every day in my current gig as the social media and marketing director at Girl Friday Productions—has prepared me exceptionally well for the launch of my debut novel this month.

Being a book publicist can be an absolute blast at its best: when you work with kind, grateful authors and you’re able to secure all the media coverage you were hoping for and it’s all positive and everyone is delighted. I probably don’t need to tell you this isn’t the norm. Many of the authors I worked with at Doubleday were lovely, but trying to secure coverage for their books—even with the venerable Doubleday behind them—was an uphill battle. This was in the mid-aughts, when the media market was shrinking dramatically, standalone book sections were disappearing (RIP Washington Post Book World), and the number of titles being pitched to the same tiny handful of outlets was exploding. In my final year in New York (2009), the economy tanked, Doubleday was folded into Knopf, and layoffs ensued. Those who remained saw their workloads double (but not their salaries, natch). The pace of change in the industry has only sped up since then. 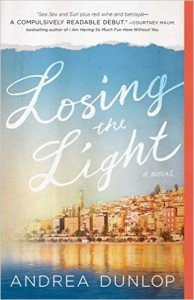 Now, all these years later, my own novel is hitting shelves (Losing the Light, from Atria) and I am feeling that signature mix of terror and joy I’ve seen in the eyes of so many over the years. Here’s what I’ve learned along the way.

Do Unto Your Publicist …

Many authors do not understand their true relationship to their publisher’s publicity team, thinking that those in-house work for them, which is not the case. This can result in some outlandishly entitled behavior. Oh, the tantrums I’ve seen! You would imagine that the authors who berated me when I was a publicist did so because their campaigns went badly, and you would be wrong. Some authors were impossible to please.

Now, we were professionals at Doubleday; we did our jobs well irrespective of authorial shenanigans. But we answered to the publisher, and the publisher wanted to sell books. But. There were authors who made me cry and authors who sent me flowers. Who do you think I went the extra mile for? Turns out publicists are human. So is everyone else who is working on your book. Publishing folks, by and large, are good, smart, passionate book-loving people—not to mention often young, underpaid, and living in one of the world’s most expensive cities. An author’s role is to be their teammate, not their taskmaster. And bully the assistants at your peril—they’ll be running things sooner than you think.

Show Up for Your Book

When I was at Doubleday, there was the occasional mention of blogging or tweeting, but social media was nowhere near as ubiquitous or as powerful as it is today. In my current role at Girl Friday, I sometimes hear people complain about “having” to promote their own work. No. You get to promote your own work now.

What has always been true is that authors need to care about their books way more than anyone else involved. What’s true now is that you don’t have to so much as leave your couch to help your cause. Get your head around social media, web analytics, bloggers, all of it—there are a million resources out there to help you help yourself, and there’s no excuse for you not to be an integral part of your book’s promotion.

What broke my heart far more than the meanie authors were the nice ones who wrote beautiful, worthy books that, for whatever reason, just slipped beneath the waves with nary a splash. This fate was the most terrifying prospect of all. What if I did all that work, suffered all the slings and arrows of years of rejection, only to finally get a book published and have it met by utter silence? It was awful, watching these books die on the vine.

That never has to be you. If your book has an audience (and if a publisher bought it, it likely does), you have all the tools at your disposal to reach them. I’m not saying this doesn’t take a lot of work and some expertise, but these things are available to you. There will never be nothing you can do.

Part of the reason I stopped working on publicity campaigns for authors was because it was so impossible to promise authors that there would be a return on their investment. I could hustle, I could pitch, I could, in essence, try, but the decisions were always up to the members of the media who I was pitching. But with savvy use of social media (especially the paid features, which are, in Facebook’s case, mind-blowingly sophisticated), you will always see some results. They may not be exactly the results you hoped for, but they will be something you can build on over time, which is crucial if you want being an author to be a lifelong enterprise, as most of us do.

Get the Help You Need

Showing up for your book doesn’t mean doing everything yourself. Getting in an entrepreneurial mindset is key. If you were starting a business, you’d likely hire a team of folks to help: a lawyer, an accountant, and so on. This is something successful self-published authors are savvy about by necessity. Know what you want and decide who you’ll need to help you get there.

For my debut novel, I hired a publicist, not because I didn’t trust my in-house team—who have all been enthusiastic, supportive, and highly competent—but because I know I have especially big goals. I hired Booksparks, who came recommended to me by other authors from Atria, and I couldn’t be happier with the results: they’ve worked seamlessly with my in-house team and been a delight throughout the process.

Such referrals are one of the many ways in which your fellow authors will be your best resource. Developing this community by reading other contemporary books in your genre, promoting those books on your own social media, and connecting with those folks (in that order, please) is one of the best things you can do to set yourself up for success. Not to mention that this is the most fun part of the whole process. You waited all your life to be in this club, so enjoy getting to know the other members.

Because I no longer work in-house, I can tell you everything I wish I could have been more blunt about when I was a publicist. Understand what you’re up against, because the odds are not going to be in your favor, but the landscape—at least for the motivated author—definitely is. Be your book’s biggest champion, get creative about your promotion, and never, ever make your publicist cry.