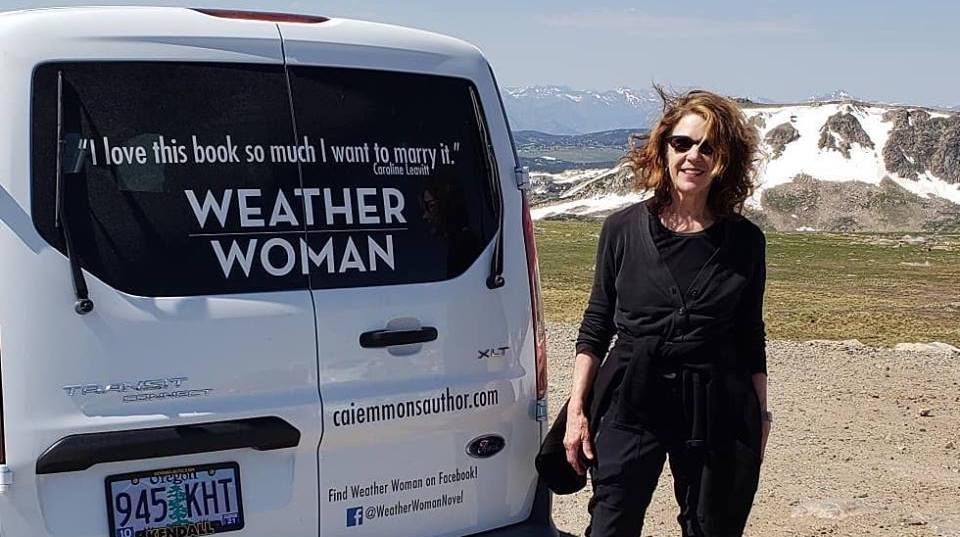 In November, Weather Woman by Cai Emmons will release from Red Hen Press. To spread the word this summer, Cai drove “the Weather Woman van” to independent bookstores in the Western United States, distributing advance reader copies and chatting with booksellers. She’s also speaking at a variety of venues across the country (see the full list).

Given the unusual nature of her pre-publication marketing, I asked her why she’s pursued this strategy and what the payoff has been thus far.

Jane Friedman: What inspired you to do this van tour to bookstores?

Cai Emmons: I felt that my first two novels could have had a wider readership, so when I received a contract for my third book from Red Hen Press, I decided to educate myself about book promotion as thoroughly as I could.

Red Hen was emphatic that I needed to take responsibility in getting my book out there, something Harcourt and HarperCollins had not said to me so directly. As I went about educating myself, a remark of yours made a deep impression on me: You said that it made no sense for a writer to force herself to do things she hated to do or was bad at, but that she should do the things she liked and was good at. That comment prompted me to evaluate my strengths. I’m pretty good at talking to people one-on-one. And I love booksellers.

As I was thinking about this, I spotted the owner of my yoga studio in a yoga pose on the side of a bus. Then the idea came to me: I would put my book cover on the side of a vehicle and drive around to independent booksellers and chat them up in advance of publication to encourage them to carry the book.

I got hold of a Ford transit van and put a blowup mattress in the back for sleeping. I wrapped the side of the van with the book cover art and some quotes, along with my website and social media handles. Red Hen was very enthusiastic and supportive about the idea, and they supplied me with ARCs to give to the booksellers.

How did you decide where to go?

I divided the tour into three legs. The first one was a week long and it took me throughout Western Oregon (up to Portland and Astoria and down the coast). The second tour, also a week, took me up to Seattle (so many bookstores in that one city alone!) and Bellingham, then down through Anacortes, Port Townsend, Bremerton, Bainbridge, and Olympia.

The third and longest leg lasted three weeks, and it began in Eastern Oregon and Eastern Washington (Walla Walla, Spokane, etc.) then to Idaho (Moscow and Coeur d’Alene) then across Montana (Missoula, Bozeman, Butte, Billings), then down through Wyoming and into Colorado because my niece was getting married in Denver. In Colorado I hit Fort Collins, Boulder, Denver, Aspen, and Vail.

In the future I might opt to go south to California, and if I had the time I would drive east, as I have lived in New York and New England and will be going to those places for readings.

How did you arrange your visits? Did people know you were coming? Did your publisher help out?

My publisher had the list of places I planned to visit and sent each bookstore an email telling them who I am, what my book is about, and that I was coming.

But I could not be sure about how long it would take me to get from place to place, so we did not specify an exact time, or even day, only the week that I would be arriving. What this meant is that often the person behind the counter was not the person who had received the email, so I found myself doing “cold calls.” At first that was a little intimidating, but over time I became fairly comfortable initiating conversations and telling people what I was up to.

In general the reception was very positive. People liked that I was getting behind the promotion of my book (and they understood the need for it). I learned to engage with the booksellers not just about my book, but about books in general, and about what it was like to own a bookstore. I now feel even more simpatico with people who have decided to devote themselves to books in this way.

Since the intent of the tour was to cultivate a relationship with booksellers in advance of the book coming out, I tried to follow up my visits with emails thanking them. Many responded suggesting possible events. I will be going to the Pacific Northwest Booksellers Convention in a week and hope to see many of those same booksellers there.

What role did the branded van play? 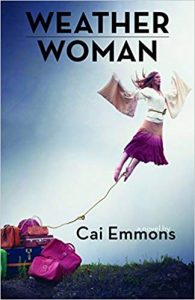 I intended for the van to serve as a kind of passive publicity, something people would see as they passed me on the freeway, or as they waited behind me at a stoplight. That seemed to be exactly how it functioned. A number of people got in touch with me through Facebook or my website as a result of seeing me drive by. Also, many people flagged me down to engage me in conversation in parking lots and gas stations.

A particularly amusing moment was the paraglider in Chelan, Washington, who told me there was a major gathering of paragliders happening that very day. He said that he was sure every paraglider would buy my book because of its cover, which features a woman looking as if she is taking flight!

How do you think your tour will affect sales?

I will get back to you on that once the book comes out!

What kind of financial investment did this involve?

The primary investments here were the cost of “wrapping” the van—a couple of hundred dollars—and then the cost of lodging when I did not camp or stay with friends. Then there was the investment of a chunk of time. But I think this is a project that can be scaled up or down in terms of both time and money. Some other Red Hen authors plan to do modified versions of a bookstore tour.

What did you learn about bookstores these days?

One of the things that was striking to me is that the best bookstores are aware of functioning as a kind of community center, a comfortable and convenient place for people to hang out, bring their computers, maybe their children, drink coffee (and in some place alcohol), and browse books. They are beginning to understand that a sense of community is hard to come by in our culture, and they are trying to fill the gap.

What did you learn about yourself?

The best part of this tour was the way it empowered me. I was forced to really take ownership of the promotion of this novel, something I didn’t do nearly as fully with my first two novels.

In the past I was timid about pushing my book on people, uncomfortable with the idea of being a salesperson. I learned from this tour that I actually do have a sense of how to get my book into the hands of the people who would enjoy reading it without being pushy or boastful. I have even begun spotting readers (people with their eyes in books) in airports—or once on the subway—and handing them a card with a synopsis of the book. In all cases these readers have responded well. If people don’t know about your book, they can’t possibly read it!

Is this something you would do again for another book?

Absolutely. I think it is true that some books are easier to promote this way than others. Weather Woman was easy to pitch in one line: “It is the story of a meteorologist who discovers she has the power to change the weather.” Not all novels, memoirs, or books of poetry are so easy to describe briefly.

Also, the cover art for my book is very evocative. Some covers are not as suggestive and might not provoke the same degree of curiosity. But in general, I think that creating alliances with booksellers is always a productive expenditure of energy. We are in business together, the business of selling books, and we need each other. It is a very natural alliance.