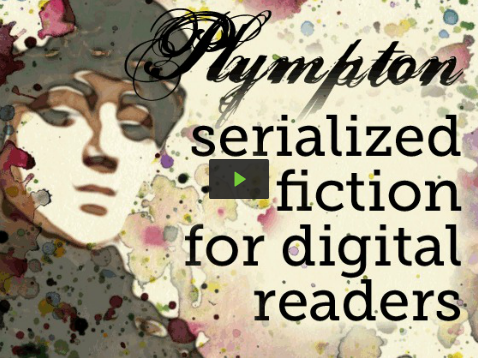 In the past year, I’ve run two posts specifically related to serial fiction—a guest post by Roz Morris and a Q&A with Sean Platt. I also wrote a more in-depth piece for Publishing Perspectives on the topic last year.

Last month, Amazon announced Kindle Serials: a new, formal publishing program, exclusive to Kindle, that focuses on publishing serial fiction. Customers who pay $1.99 automatically receive all installments in a series. (For an insider analysis of this program, check Porter Anderson’s write up.)

Plympton—a new digital publishing start up—is one of the companies that has partnered with the Kindle Serials program. Yael Goldstein Love, Plympton’s co-founder and editorial director, was gracious enough to answer a few questions about what’s happening.

E-book serials have been around for a while, though I know some authors have struggled to make it work without a subscription infrastructure in place to help facilitate. Now with Amazon launching Kindle Serials, and formalizing the approach, do you think this changes the game?

I do. There’s been some great stuff happening in serialization for e-books over the past several years and it’s an exciting space. But it’s still a niche market—a passionate and thriving one, but niche all the same.

What we at Plympton want to do is to make serials a standard format, a third option beside novels and short stories. We want serial to be a format that every fiction reader loves to read and every fiction writer at least considers experimenting with at some point.

It sounds bold, I know, but I don’t think it’s far fetched. Think about what’s happened with television. As a culture, we’ve become addicted to serials like Mad Men and Breaking Bad, and they’ve arguably become the dominant form of cinematic storytelling, replacing the movie for sheer exuberance and originality.

Because of shows like these we’ve actually come to expect our big stories to arrive in bite-size chunks. And I think that’s a happy turn of events because bite-size chunks is a compelling way to experience a story. There’s the delight of the cliffhanger, but there’s also the arguably even deeper delight of the time between episodes, anticipating and speculating about what will happen next. That break between episodes makes our relationship with the characters feel more intimate because they can surprise, disappoint, and betray us in real time.

All of this is to say that I can see serial fiction becoming entirely mainstream, and it’s our goal at Plympton to make that happen. Amazon’s investment in Kindle Serials certainly makes our job easier because what’s needed most at this stage is reader education and no one is in a position to reach readers quite like Amazon.

Some have argued that the “truest” serial fiction writers are not after profit. Or, put another way, “pure” forms of serial fiction in contemporary terms—in Asia with cell phone novels, or in fan fiction—are put forth in a very spontaneous way that’s linked to a community rather than revenue. Seen in this light, a formalized, Amazon-corporate approach to serial fiction would seem to kill the essence of it. What do you think? (Just playing devil’s advocate here.)

I guess what I’d say to that is that serials have a long history. In the latter half of the 19th-century a novel was rarely published as a book before first being serialized in a newspaper or magazine. We’re not just talking Dickens here. We’re talking Mark Twain, Henry James, George Eliot, Herman Melville, and that’s just in the English language. Flaubert, Tolstoy, and Dostoevksy published their most famous novels as serials as well. And these writers didn’t publish serials just for the love of the written word. They did it to make money. Most of the great (as well as not so great) 19th-century novelists needed that money in order to survive, and in fact that was part of the appeal of the serial format: it gave writers an additional income stream, before their full books went into print.

We at Plympton see income for writers as one of the draws as well. We want writers to get paid for their writing. They should. Writing is hard, passionate, soul-consuming work. A person should be remunerated for it. In an ideal world a person who does it well enough should be able to make a living from it so that they can devote themselves to it entirely. That’s our dream, anyway.

Kindle Serials (through which Plympton titles are available) cost $1.99. I know from my conversations with another serial writer, Sean Platt, that it can be very difficult to make serials pay off at that kind of price point. I’ve heard speculation that $1.99 is an introductory price from Amazon, and the price may increase, or there will be other revenue lines from the project (e.g., print compilations). Any thoughts on this?

It’s not what we would have done ourselves, but if Amazon knows anything it’s how to make money so we’re trusting them on this. I can’t say anything more about their plans, but I will say that we have a lot experiments we’re eager to run in this area and we’ll be doing that with our next titles.

When I researched serials last year, it became clear that readers of serials come in many different forms. Some people will read installments as they are released, others will wait for the entire book to be available, and still others look for an edited print compilation. Is Plympton targeting all of these reader types, or just a segment?

Yeah, we’re targeting all these reader types. Our three titles in the Kindle Serials program will be released as paperback books when the serialization is complete. We’ve also talked amongst ourselves about doing an edited print compilation for some of our future titles. We’re very open to experimentation here. We have a lot of schemes up our sleeves, some of which will no doubt be tremendous flops, but some of which—who knows? Maybe we’ll find that sweet spot that gives a book nine lives. Most books’ lives are far too short, don’t you think?

Finally, many authors I spoke with [for the Publishing Perspectives piece] agreed that the process of serialization worked best almost as a marketing device—to build buzz and spread the word before a final book/compilation was released. This means the serialization becomes, in part, a gimmick to sell the final product, but I don’t think Plympton has been launched with this as the philosophy?

No, that’s not our philosophy at all. We really believe in the serial experience. We believe it can enhance reading in all sorts of ways. There’s that anticipation and speculation I mentioned above. There’s also the fact that serials are well-sized to fit into a busy person’s life. And I can’t help thinking that serials distill the essence of what we love about fiction in the first place—the way it mimics life but more beautifully, more instructively. The way it gives us a chance to actually be someone else for a while, inhabiting an unfamiliar psyche. When we live inside these stories for months, years even, it takes those features of fiction to a whole new level.

And here’s where I start to sound like a zealot: I actually think this way of reading can enhance our empathy and our open-mindedness by forcing us to stay inside other minds for longer periods. I have a theory that if Uncle Tom’s Cabin hadn’t been serialized—which it was, by the way—but just published as one complete book, it wouldn’t have had the effect that it had on thousands of white readers. It would have been easier to read it, put it aside, and forget the uncomfortable fact that something horrific was happening in this country. But instead readers had to sit with it for months, worrying about the characters between installments, thinking and wondering as they went about their lives. I bet that made it a lot harder to forget those uncomfortable facts. Not that I’m saying we should all start reading serials because if we do we’ll change the world. (Although how’s that for a slogan?) I mention it mainly because I think it highlights just how much depth and richness the serial experience can add. It’s the furthest thing from a gimmick; it’s an art form.

What do you think about serial fiction as an art form? Do you read serials—or will you give them a try? Give us your thoughts in the comments.