Beginnings are difficult when you consider their weight in the overall story. They must accomplish all of the following:

The beginning of a story is rather like a résumé. You flaunt your talents and skills and hope readers find what they’re looking for. Otherwise, you’re never going to make it off the bookstore shelf.

Here are four of the biggest pitfalls in story openings.

As your story unfolds, you want readers asking concrete questions. Who stole the Statue of Liberty? How is Westley going to escape the Pit of Despair? Why did Cinderella order glass slippers a size too large? You don’t want them asking the dreaded four-word question: What’s going on here? Or, worse: Huh?

Be wary of creating false suspense—the kind of suspense that has readers floundering to understand the basics of your scene. False suspense may have readers asking questions such as:

Writers have an ongoing love affair with prologues. It is often intended to fill readers in on important need-to-know info, so they’ll understand what’s going on when they dive into the “real” beginning of the story.

However, the prologue is a prime example of writers wanting to hold their readers’ hands. Because we’re convinced readers won’t be able to figure out the backstory without a little help, we proceed to spell it out in the greatest possible detail.

At first glance, that’s not necessarily a bad thing. Lack of information can undermine the entire arc of the story and leave readers uncertain and dissatisfied. But are prologues the best way to supply that necessary information?

Chief among the prologue’s inherent flaws is that it forces readers to begin a story twice. Any emotion they may have invested in your story will be threatened by the switch that takes place when they turn the page and find themselves staring at “Chapter One.”

I can hear writers everywhere saying, “But the information in my prologue is vital! My story simply won’t work without a prologue!” Take a closer look at your first chapter. Generally, you’ll find that a strong first chapter (a must with or without a prologue) will provide a better opening for your story than the prologue. Too often, prologues are little more than information dumps. That is, after all, their purpose. And therein lies the problem. Backstory is much more effective once readers have a reason to care about your characters.

Some of the best prologues are short (containing little other than the hook itself) and very sparse on character or story development. These prologues don’t even attempt in-depth character or plot introductions. They exist merely to impart some important information—be it an event that occurs previous to the story, an event that occurs after the story, an antagonist perspective, etc.

Robert Ludlum’s The Bourne Identity opens with two newspaper articles conveying information about the story’s antagonist and effectively setting the scene for the hero’s entrance. The prologue is short, smart, and doesn’t require readers to invest their emotions only to reinvest them at the beginning of Chapter 1.

Consider two rules to govern your use of the prologue:

Agents and editors dislike stories that begin with dream sequences—mostly because dream beginnings tend to suffer from the same problems as prologues. They almost always fail to present a strong hook, character, setting, conflict, or frame. There are exceptions to this rule, but your wisest move is generally to cut the dream and find a stronger opening.

Before surrendering to the temptation to open your story with a dream, stop and ask yourself the following questions:

If the answer to any of these is no, you’d be wise to trim the dream to a sentence or two—or delete it entirely.

Sooner or later, most authors feel the constraints of opening a story in medias res. How can readers fully comprehend events unless we’ve first given them an understanding of the important backstory that preceded the opening? But if info dumps, prologues, flashbacks, and dream sequences aren’t the answer, what is? How can you spare readers from confusion while still avoiding too much backstory in your opening chapters?

Backstory is at its most powerful when we don’t tell it—or rather when we don’t show it. The strength of backstory is its looming shadow. Readers know it’s there, they see the effect it’s having upon the characters, but they don’t always need to know the nitty-gritty details.

Consider the two movie adaptations of The Scarlet Pimpernel—the one made in 1934 with Leslie Howard, and the one made in 1982 with Anthony Andrews. The films are very similar in their telling of this classic story, with the exception that the much longer 1982 version spends almost a full hour detailing Sir Percival Blakeney’s courtship, marriage, and subsequent discovery of his wife’s apparent treachery against a doomed family of French nobles. In the 1934 version, these events comprise the backstory and are related only in bits and pieces throughout the body of the film. Because of this very thing, the earlier film is by far the stronger bit of storytelling.

The important lesson to be gleaned here is twofold:

The ballast provided by backstory gives our stories greater depth and meaning and opens up the potential for interpretation. If we turn too much of our backstory into the story, or illustrate too much of it via detailed flashbacks (either at the beginning of our stories or in subsequent chapters), we rob our readers of the sense of weight given by 9/10ths of the iceberg floating under the water of our stories. 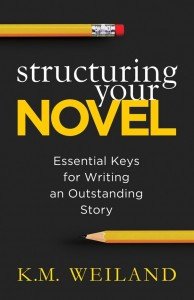 Note from Jane: If you found this post helpful, I encourage you to check out K.M. Weiland’s Structuring Your Novel. You can download the first chapter at Amazon.