Today’s guest post is by Grant Faulkner, executive director of Nanowrimo and author of Pep Talks for Writers.

For writers unaware, Nanowrimo is National Novel Writing Month, where writers around the world challenge themselves to write 50,000 words in 30 days. It starts November 1. Learn more.

Somewhere deep within most of us, there is a wound. For some, it’s vile and festering; for others, it’s scarred over. It’s the type of wound that doesn’t really heal at least not through any kind of stoic disregard or even the balm of time.

I’m not talking about a flesh wound, but a psychological wound—the kind that happens when someone told you in an elementary school art class that you didn’t draw well, or when you gave a story to a friend to read in the hopes they would shower you with encouragement, but they treated the story with disregard. We put our souls, the meaning of our lives, into the things we create, whether they are large or small works, and when the world rebuffs us, or is outright hostile, the pain is such that it might as well be a flesh wound. In fact, it sometimes might be better to have a flesh wound.

To be a creator is to invite others to load their slingshots with rocks of disparagement and try to shoot you down.

I’ve been hit with many such rocks. Perhaps the most devastating rock was slung by a renowned author who I took a writing class from. My hopes were ridiculously high, of course. I wanted her to recognize my talent, to affirm my prose. I wanted her to befriend me, to open up the doors of her mind and show me the captivating way she thought. I was young, and I walked into her class as if I was a puppy dog, my tongue wagging, expecting to play. My first day of class might as well have been the opening scene of a tragic play.

When I turned in my story for her feedback, not only did she not recognize my talent, but she eviscerated my story. She might as well have used shears. “No shit!” she wrote in the margins of one page. I met with her in her office hours to ask her questions and hopefully make a connection, but she was equally cold and cutting, offering nothing that resembled constructive critique, just the pure vitriol of negativity. She said my story was boring, pretentious. She said my dialogue, which others had previously praised, was limp and lifeless.

That was the only time in my writing life when I felt truly defeated. It was the only time in my life when I was utterly unable to pick up a pen to write anything. I’d been critiqued in many a writing workshop before—relatively severely even—so I wasn’t a naive innocent. But I’d never experienced such slashing and damning comments. I’d always been resilient and determined in the face of such negativity, but this time I lay on the couch watching TV for several days afterward, my brain looping through her scissoring comments again and again.

I hope you haven’t experienced anything like this, but, unfortunately, almost every writer I’ve talked to has a similar story. When something you’ve created—something that glows so brightly with the beauty of your spirit—meets with such an ill fate, it can create the type of wound that never truly closes. You can stitch it closed, but the swelling puss within it can still break the stitches back open. It’s always vulnerable to infections, resistant to salves. Time heals . . . a little, but not necessarily entirely.

The question is how to begin again, how to recover the very meaning and joy that we found in our first stories—to recover the reason we write. It’s difficult. I still see that “No shit!” in the margin and sometimes wonder if I have anything worthwhile to impart, or if the quality of my prose allows me to impart my stories and ideas in an interesting and engaging way. I’ve wondered this even after getting a story or essay published. I wonder if somehow the editor didn’t realize what an imposter I am. I wonder this even now, as I write this book on the subject of writing of all things, a book that has a publisher, a book that has been guided by a fine editor, a book that is sold in stores. Wounds can open when least expected, and from them self-doubt riles with a snarl. 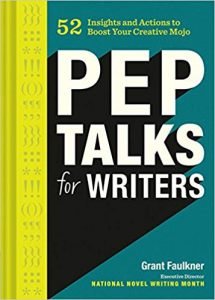 This pep talk is titled “Overcoming Creativity Wounds,” which is quite different than healing them. To overcome means to prevail. To overcome means not succumbing to the wound, but to bandage it and move on. To overcome means that you have to tell yourself that you’re creative, that the only significant thing you’ll accomplish in this life will come from that singular imaginative force that is you—that you deserve to frolic with words, to explore worlds, to dance with the characters in your stories (or follow them down dark alleys and go to war with them). To overcome means to say no to the naysayers and yes to your indomitable will. (Trust me, you do have an indomitable will, even if you’re thinking about turning on the TV.)

To overcome is to write your story, to believe in it.

There’s no one recipe to overcome a creativity wound, but putting a pen between your fingers and then resting it on a piece of paper is a pretty good start to finding one. Start writing. Keep writing. And the wound will fade and even fuel your work, even if it might not truly go away.

Grant Faulkner is the Executive Director of National Writing Month (NaNoWriMo) and the co-founder of the online literary journal 100 Word Story and the Flash Fiction Collective.

He believes quite simply that everyone is a writer—that we create our world through stories we tell—so he prods everyone he meets to write a novel and discover how life can be transformed through a daring creative act.

His stories and essays have appeared in dozens of publications, including The New York Times, Poets & Writers, Writer’s Digest, The Writer, The Southwest Review, PANK, and The Berkeley Review.