Today’s guest post is adapted from the Writing & Selling Your Mystery Novel: Revised and Expanded by Hallie Ephron (@HallieEphron).

No pressure, but the opening of your book is the gatekeeper in determining whether your novel will sell. If your opening is weak, it won’t matter if chapter two is a masterpiece. Editors and agents and booksellers and librarians and readers will stop reading before they get there.

Your opening scene can be long or short. It can be action packed, or moody and rich in description, or skeletal and spare. It may contain a vivid sense of setting or a strong shot of character. Regardless of what’s in that scene, the reader should have some idea of what the novel is going to be about after reading it, or at least have a good sense of the theme. Most of all, when they finish, readers should be eager to keep reading.

So what makes for a good dramatic opening? In the absence of any useful rules, the best I can offer is an example. We’ll consider the opening scene of Julia Spencer-Fleming’s award-winning debut novel, In the Bleak Midwinter. Plot and character take equal weight. It’s as much about introducing police chief Russ Van Alstyne (one of the series’ two protagonists) as it is about setting up the story of an abandoned baby. Every sentence, every detail is a deliberate choice, and by the end, the reader knows that the novel will answer two questions: Who abandoned that baby, and why? The opening line:

It was one hell of a night to throw away a baby.

Right away, the opening establishes an out-of-whack event: a baby has been abandoned. This intriguing opening is a line of internal dialogue that puts the reader firmly in Russ’s head. The point of view is the third-person limited, and we experience this scene as if the camera is looking through Van Alstyne’s eyes. His thoughts filter the images we see. It’s written in the past tense, but the feeling is one of immediacy.

The cold pinched at Russ Van Alstyne’s nose and made him jam his hands deep into his coat pockets, grateful that the Washington County Hospital had a police parking spot just a few yards from the ER doors.

You’ve probably heard the author’s adage “Show; don’t tell.” Throughout this brief passage, Spencer-Fleming shows us what Van Alstyne is like. She shows that he is chief of police: The ambulance driver addresses him as “Chief,” and he parks his car in a police parking spot. She also shows how cold it is with the phrase “the cold pinched his nose” and with the way Van Alstyne jams his hands into his pockets. The bitter cold isn’t mentioned just for ambience; it brings home to the reader how dangerous it was for that baby to be left on the church steps.

The place smelled of disinfectant and bodies, with a whiff of cow manure left over by the last farmer who had come in straight from the barn.

In a few descriptive phrases, we get a visceral sense of place. We know this is a hospital, and we know it’s located somewhere rural. We later get a detailed description of what Van Alstyne is wearing (wrinkled wool pants shoved into salt-stained hunting boots) as he mentally compares himself to a younger officer (spit-and-polished within an inch of his life.) Van Alstyne is a guy with more than a few miles on him who doesn’t fuss with his appearance.

“How’s the baby look?” Van Alstyne asks. He cares. And already we’re wondering: Who left this baby on the church steps, and what happened to the baby’s mother? “He was wrapped up really well, and the doc says he probably wasn’t out in the cold more’n a half hour or so.”

Clues!, thinks the astute reader. Someone wrapped that baby up well. Maybe that someone was even watching to be sure the baby was found in time.

Here’s what Spencer-Fleming doesn’t give the reader: a whole lot of backstory. Backstory is background information about how a character arrived at this particular place and time. When a load of backstory has been dumped into the opening chapter, it’s a sure sign that the novel was written by a novice. At this point we get only a whiff of Van Alstyne’s past and a hint of why an abandoned baby matters to him:

He’d had one baby-stuffed-in-a-garbage-bag case when he’d been an MP in Germany, and he didn’t care to ever see one again.

That’s all the reader needs to know at this point.

How to Write Your Mystery Opening

Open your mystery novel with a dramatic scene in which something out of the ordinary happens. It might be a murder or just some out-of-whack event with an element of mystery to it.

Your novel might open with the murder itself. Or it might begin with your protagonist discovering that someone has been murdered. Or it might start with an event that happened years before the main story begins.

Your book has to start in an exciting or intriguing way by posing an unanswered question that provides a narrative hook that pulls the reader forward. You don’t have to have a body drop in the first chapter. And you usually can’t solve the problem of a flat, uninspired opening by inserting a prologue that flashes forward to the murder, followed by a chapter one that takes place earlier.

Unanswered question: Is this woman the defense attorney’s twin, and is she a murderer?

Unanswered question: Why would Gary ask for Smith? Smith hasn’t seen his nephew for years and is estranged from Gary’s parents.

Warning: Don’t allow your opening scene to steal your book’s thunder. It’s tempting to write something that foreshadows the big secret, but keep in mind that in doing so you might weaken the reveal at the end.

So pick your opening gambit, and examine it with a critical eye. Be sure it sets up your novel, propels the reader forward, but doesn’t rob your story of potential surprise by revealing too much too soon.

The first scene of your book presents some unique problems. Your primary job is to get your story moving. At the same time, you need to introduce your characters, the setting, and the situation. It’s a tall order, and it’s easy to bore the reader with too much information or to confuse him by laying too little groundwork. 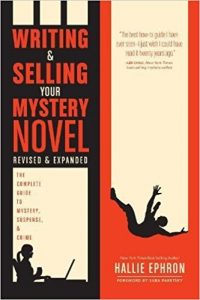 Keep your eye trained on the story you’re setting up—something intriguing has to happen. Lay in just enough character and setting description to orient the reader. You have the rest of the book to fill in the blanks.

End your dramatic opening scene with an unanswered question that is implied or stated. Your goal is to make it impossible for the reader to put down your novel. Steer clear of a “Had I but known” ending or a generic “Boy, was I surprised and terrified by what happened next” statement that could be tacked on to the end of any novel’s opening.

If you enjoyed this post, be sure to take a look at Writing & Selling Your Mystery Novel by Hallie Ephron.

Hallie Ephron is the New York Times bestselling author of suspense and mystery novels. Her novels have been called “deliciously creepy” (Publishers Weekly), “gripping” (The Boston Globe), and “snaky and unsettling” (Seattle Times). She is a four-time finalist for the Mary Higgins Clark Award, recognizing excellence in suspense. Her novel Never Tell a Lie was turned into a movie for the Lifetime Movie Network. She wrote an On Crime book review column for The Boston Globe for more than ten years and won the Ellen Nehr Award for Excellence in Mystery Reviewing. The first edition of Writing and Selling Your Mystery Novel was an Edgar Award finalist. Hallie is a popular speaker and teaches writing at conferences nationally and internationally.