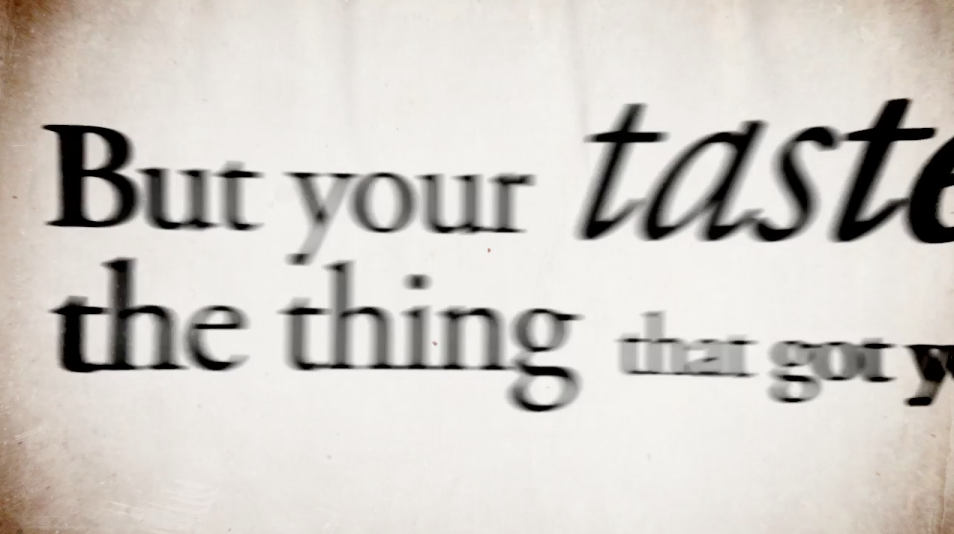 Today’s guest post is by Nell Boeschenstein, who is teaching a 5-week memoir writing class that begins April 17. Find out more.

Several years ago, a designer created a one-minute, forty-second video that animates a quote from an interview with Ira Glass on storytelling. The video itself is not remarkable. Because the transcribed text is the sole visual element, it seems more an exercise in animating typography than anything else. Nevertheless, it’s snappily-produced and the sentiment expressed in Glass’s trademark cadence, complete with rhetorical pauses on the off-beats, struck a chord. Or rather three million. After being picked up by a few prominent websites, the video went viral. Today it has more than 1.4 million views on Vimeo with a corresponding 12,400 “hearts” and an additional 1.65 million views on YouTube.

The animation begins: “Nobody tells people who are beginners, and I really wish somebody had told this to me, is that all of us who do creative work, like y’know, we get into it and we get into it because we have good taste, but it’s like there’s a gap….” Glass goes onto explain that when one first begins creating, the gap between what one knows to be good and the disappointing products of one’s efforts, is the point at which many people quit. He implores his audience to push past this point. He explains how reaching the level of skill and accomplishment to which one aspires takes years, that this is normal, that it took him – he, Ira Glass – years to get to a place that satisfied his own qualitative ambitions.

Temperamentally, I have a knee-jerk aversion to inspirational quotes. For me, they tend to oversimplify. That said, I’ll admit a fondness for this one. I like that, from the get-go, Glass included himself among those who have struggled toward mastery for years; I like that he places high stock in time, patience, determination, production. For these reasons, I am sure I am far from alone among English teachers when I say that I’ll cop to playing this video in class from time to time. When I do, I sense that my students appreciate it, that it softens the blows of teacherly criticism when they inevitably arrive.

Lately, however, the bulk of Glass’s sentiment has become muffled in the back of my mind as those first few phrases—the first thirty seconds of the video—have taken on a sharper pitch. That pitch reaches its peak with his articulation of the word “taste”. Taste. I have been thinking about taste. Specifically, good taste. Or as Glass calls it, “killer taste.” What is it, exactly? And what does it mean for our development as writers?

Well, first, it’s subjective. Jane Doe might love E.M. Forster and Jane Roe may prefer Graham Greene but that doesn’t necessarily mean that Forster is empirically better than Greene or vice versa. That is the very nature of taste. What rankles me about the Glass clip is that he seems to be implying that taste is a static, reliable inclination—that Doe will always prefer Forster and Roe, Greene. He seems to be describing a fixed endpoint toward which one toils away as opposed to a target that moves constantly over the course of a lifetime.

The latter is a more accurate description of what has been my own experience. The question clicked for me last June. I was on a writing panel and someone in the audience stood up and asked to which writers we found ourselves repeatedly returning. In past years, I would not have hesitated: Joan Didion, short and sweet. Yet sitting there, awaiting my turn, I realized that lately Didion had not been affecting me as she once had, that I was growing tired of her. Instead, I realized that I was increasingly rereading Zadie Smith’s essays, that Smith was my new Didion.

Such evolution is partly a function of age and the fact that the more we live the more we understand about life and thus the more of that understanding we bring to what we read. When I was younger Elizabeth Bishop’s famous villanelle “The Art of Losing” left me cold. Now, having lived longer and lost more, it devastates and astonishes me with its brilliance in equal measure. Aging aside, such evolution is also the definition of learning. While I will always love Jane Eyre and dislike Lord of the Flies, more interesting are the shifts in my taste, the slippages from Didions to Smiths that reflect my ongoing education. I worshipped at the altar of Didion at a time when I was struggling with the clarity of my sentences. Hers are crystalline and had much to teach me. These days, corralling complex thoughts while maintaining narrative and balancing tonal elements of gravity and levity are my intellectual albatrosses. Zadie Smith excels at this.

Instead of taste as the aspirational fixed endpoint described by Glass, a more apt analogy may be the horizon line – always ahead, never reached. This may sound defeating; it doesn’t have to. Is fulfilling one’s artistic ambitions not a recipe for a kind of complacency to be approached with as much skepticism as an inspirational quote? I know many writers—accomplished, wonderful writers—who have told me that every time they start something new they feel again like complete novices. There is likely some false modesty in this claim, but the deeper implication that mastery is never the goal, that one is always learning and relearning one’s craft, is more to the point. There are few feelings I love more than that of finishing a book or short story or poem or essay and being so moved that I sit dumbfounded and wondering, “How did he/she do that?” That mystification is, for me, part and parcel of the pleasure of reading something beautiful and dreaming up how match it. To lose that sense of wonder—that sense of admiration and aspiration—would leave me nothing short of bereaved.

I am reminded of the violin lessons I took as a child. Once a week, my mother would drive me to Mr. Lind’s studio and wait in her parked car for a half hour, while, over the years, he shepherded me through the Suzuki method, a classic memorization-based technique that takes students from the basics of bowing “Twinkle, Twinkle” to the gymnastics of Shostakovich, via a seemingly never-ending series of slim instructional volumes. Unlike the textbooks that occupied my academic hours, the sense of accomplishment I felt upon finishing one Suzuki book and moving onto the next was enormous. It was exhilarating. What would I do next? What fresh discoveries of my own abilities awaited? Which is to say, might we always look forward to that next book? Might we always look forward to what it has to teach us about our tastes—about ourselves?