This post first went live in June 2016; I’ve updated it with more recent industry statistics. If you enjoy this post, I highly recommend subscribing to The Hot Sheet, an email newsletter for professional authors that I write and publish.

When I read mainstream outlets on publishing industry issues (such as The New York Times or The Guardian), few things are more frustrating than articles that tout the “resurgence” of print—as well as the related “comeback” of independent bookstores. Most of it is wishful thinking rather than an understanding of what’s actually happening. Here are the recent data points you should know about.

The ebook sales decline (to the extent it’s real) relates to traditional publishing and its high ebook pricing. 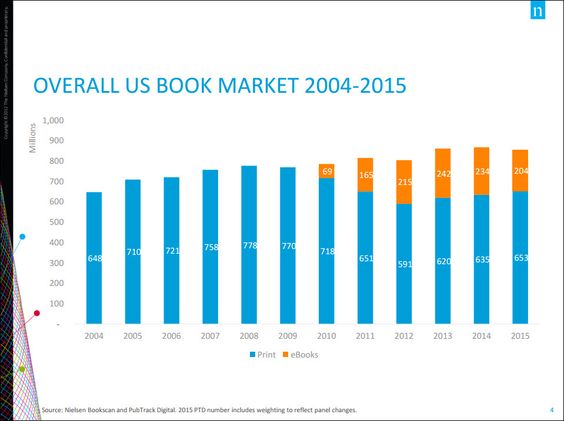 As you can tell from Nielsen’s graph above (which tracks sales of titles with ISBNs), the flattening of ebook sales started happening back in 2013. However, this decline is attributable to higher ebook prices from traditional publishers. Jonathan Stolper (formerly of Nielsen) said at Digital Book World in January 2017, “Price is the most important and most influential barrier to entry for ebook buyers and the increase in price coincided with the decrease in sales.”

If print is indeed is “back,” it’s because of Amazon. Since 2013, the traditional book publishing industry has enjoyed about a 3% increase in print book sales. However, print book sales grew largely because Amazon sold more print books. Barnes & Noble’s sales declined by 6% in 2016, and sales from mass merchandisers (Target, Walmart, etc.) also declined. But reports estimate that Amazon’s print sales in 2016 grew by 15%, primarily driven by their own discounting. (Their ebook sales are believed to have increased about 4%.)

When Amazon discounts the print edition, it often ends up undercutting the (high) ebook price. (It is not allowed to discount ebooks.) So it’s clear that consumers are unwilling to pay more, or about the same price, for an ebook as they do for print.

Kindle Unlimited (KU), Amazon’s ebook subscription program, is estimated to represent about 14% of all ebook reads in the Amazon ecosystem. KU costs $9.99/month and is strongly dominated by self-published books—none of the major publishers participate. 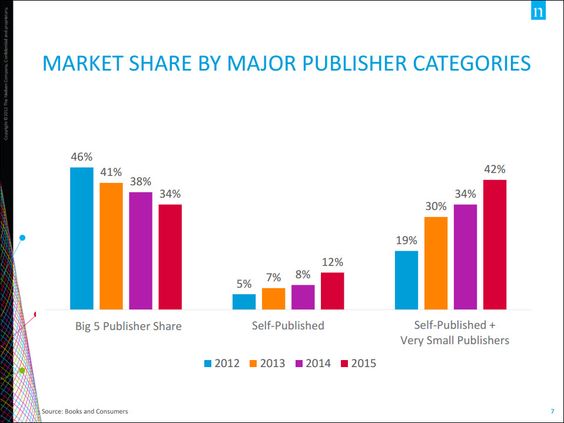 What’s even more astonishing about this graph is that Nielsen’s figures primarily give us a look at very traditional types of publishing, or books with ISBNs. There’s a whole universe of independent publishing that remains untracked because the titles don’t carry ISBNs—and most of those titles are not getting carried in your average bricks-and-mortar bookstore. They sell predominantly through Amazon.

Also, not many people are aware of what an active publisher Amazon itself is. Eight of the top 20 Kindle sellers in 2016 were from Amazon’s own publishing imprints, and Amazon now has 13 active imprints. In 2016 alone, Amazon Publishing released more than 2,000 titles.

Fiction sales are about 50% digital for traditional publishers

Often you’ll see figures that indicate that ebooks account for about 25% of all book sales for the major publishers, as in this recent graph from Nielsen, presented at London Book Fair in March 2017. 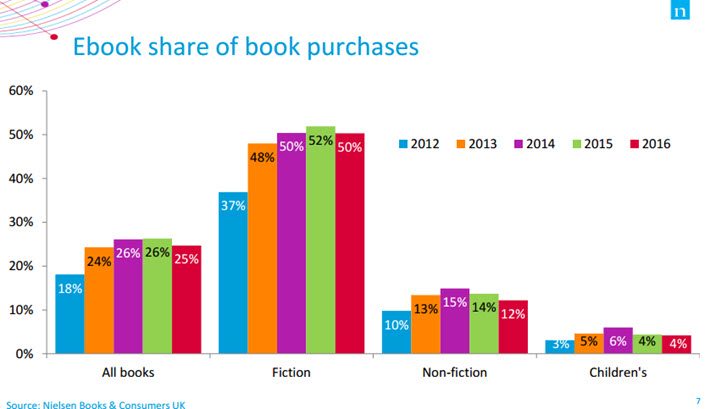 But note that’s an average across all genres and categories; if you look at fiction alone, sales are about half digital for traditionally published books. Once you factor in the nontraditional sales (self-published titles and Amazon Publishing titles), it would be within reason to expect about all fiction sales to be about 70% digital.

Throughout 2016, the biggest bookstore chain in the United States struggled. During the holidays, the chain reported that comparable-store sales were down 9.1% versus 2015. The drop was attributed to various factors, including slower foot traffic in stores, the declining sales of adult coloring books, and no bestselling album by Adele.

The latest B&N quarterly earnings report showed a retail sales decline of 7.5%. Nook sales (which include devices, ebooks, and accessories) declined by 25.7%. B&N stated, “Despite post-holiday sales improvements, trends softened in late January and into the fourth quarter.”

Meanwhile, print book sales so far in 2017 show that the industry is not suffering that same rate of decline—so B&N is losing share to its competitors. The bookstore chain Indigo in Canada is showing growth, although that growth is from non-book merchandise. (Book sales remain flat at Indigo.)

Over the last few years, one of the feel-good publishing stories has been the rise of the independent bookstore. However, even though memberships at the American Bookseller Association (ABA) are up, stores still face issues of long-term sustainability.

For independent bookstores reporting to Nielsen, unit sales increases in 2016 were around 5%, compared to a 6.4% increase in all US print book sales. While independent bookstores have benefited from the “shop local” movement, better technology for store management and sales, and better terms from publishers, one has to be extremely optimistic to envision them growing in the face of a competitor like Amazon. (Amazon has been opening its own bricks-and-mortar bookstores across the country. They’re relatively small at 3,500 square feet; the average Barnes & Noble is ten times that size. All the books are face out, so the emphasis is on curation, and no prices are listed. Prices are variable and depend on whether the customer is an Amazon Prime member.)

At a recent conference, ABA CEO Oren Teicher said that the average profit margin of an independent bookstore is 2.4%. Therefore, even small changes in costs—such as wage or rent increases—can quickly make a store unprofitable.

To survive minimum wage increases, Shelf Awareness reported that booksellers seek to add products with a better profit margin than books: “Books Inc. [in San Francisco] has increased its sales mix from about 2 percent in gifts to around 15 percent currently. [They] would highly recommend that any bookstore not selling gifts do so.”

Additionally, booksellers are hoping for better terms from publishers, which isn’t necessarily wishful thinking; in 2016, HarperCollins launched the New Bookstore Development Program to support the opening of new independent bookstores or those expanding to new locations.

Bradley Graham, the co-owner of Politics & Prose, told Shelf Awareness that, despite the recent optimism surrounding indie bookstores, they still face serious challenges, and “the industry is not necessarily on firm financial footing for the foreseeable future.”

Carry a big dose of skepticism, and look at possible underlying agendas, when you hear celebrations about print’s comeback. While I’m not at proclaiming the death of print or traditional publishers, few media outlets have an understanding of the big picture.

If you’re interested in ongoing analysis and information about publishing industry, start a free 30-day trial to The Hot Sheet.