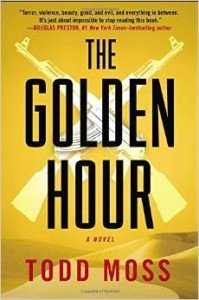 One of the unexpected surprises of being a new author is how much goes into promoting your books. I was lucky to be published by Penguin’s Putnam imprint for my debut novel, The Golden Hour. Yet even with the backing of a hefty Big Five publisher, I discovered that delivering the manuscript is just the beginning.

In 2013, Putnam offered me a generous multi-book contract for a thriller series about Judd Ryker, a crisis manager in the State Department inspired in part by my experiences working inside the U.S. Government. In the first installment, Ryker is sent to the West African nation of Mali to try to rescue an American ally who has been overthrown in a coup d’état.

During the sixteen (long!) months between signing the contract and the actual release of the first book in September 2014, Penguin provided an enthusiastic marketing team and two professional publicists. I couldn’t have asked for more support from Putnam, and I’m exceedingly grateful for all they did to help propel The Golden Hour to the Washington Post bestseller list.

The book’s success helped turn a fun, mostly weekend project into a second career. I still love my day job running a Washington DC think tank, so I tightly plan my schedule to allow me to do both. Yet, even with Penguin’s mighty PR machine, there’s still plenty the author is expected to do to create visibility and connect with readers.

Putnam helps me by crafting graphics and giving advice when I ask, but I built and manage my own website, created a Facebook author page, and was already fairly active on Twitter. I’m on Twitter nearly every day in short bursts and try to post on Facebook about once per week. I’m taking the long view on social media, as I’m not yet convinced the hours I spend on it greatly impact sales, but I find it energizing to engage directly with fans and other writers. I also created an email database of some five hundred friends and colleagues who want to know the latest and support my writing life. I’m still trying to figure out the right frequency for communicating with this list (how to keep friends in the loop without annoying them), so for now I’m hitting them only once or twice per year.

Putnam’s publicists created a press kit and helped me to place articles in USA Today, the Daily Beast, and on NPR’s Goats and Soda. They booked me on MSNBC’s The Cycle and the Diane Rehm Show on NPR, and arranged nearly fifty (!) back-to-back radio interviews over two days. This was tremendous. Yet I’m still tapping my own networks to get in the newspapers or on radio and TV, especially outside of the immediate weeks surrounding a launch.

I’d heard that traditional book tours are becoming a thing of the past, so I wasn’t expecting much. Still, Putnam arranged a book launch at Politics & Prose (a humbling rite of passage for any Washington DC author) and a brief but exhilarating tour to bookshops in Phoenix and Houston. Turnout at each was mostly friends (and friends of friends!) since, by definition, no one knows debut authors. I hope turnout will grow 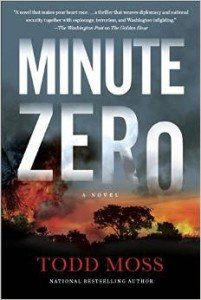 over time as my fan base expands. With encouragement from the publisher, I also organized a further seventeen public appearances at schools and professional organizations, plus several private events with book clubs, arranged by friends.

I recently delivered the third manuscript in the series and am starting on the outline for the fourth. But mostly I’m now gearing up to promote book two, Minute Zero, for its release September 15. This time, Ryker is headed to Zimbabwe, where an aging dictator is trying to cling to power through force and fraud. Again, Putnam is doing the heavy lifting on marketing and publicity. But this time around, I’m more prepared to do my part, since I’ve realized that being an author is so much more than just writing books.

Todd Moss is author of The Golden Hour, Minute Zero, and the upcoming Ghosts of Havana. In his day job, he is chief operating officer and a senior fellow at the Center for Global Development and formerly served as Deputy Assistant Secretary of State for Africa. Visit his website or follow him on Twitter.