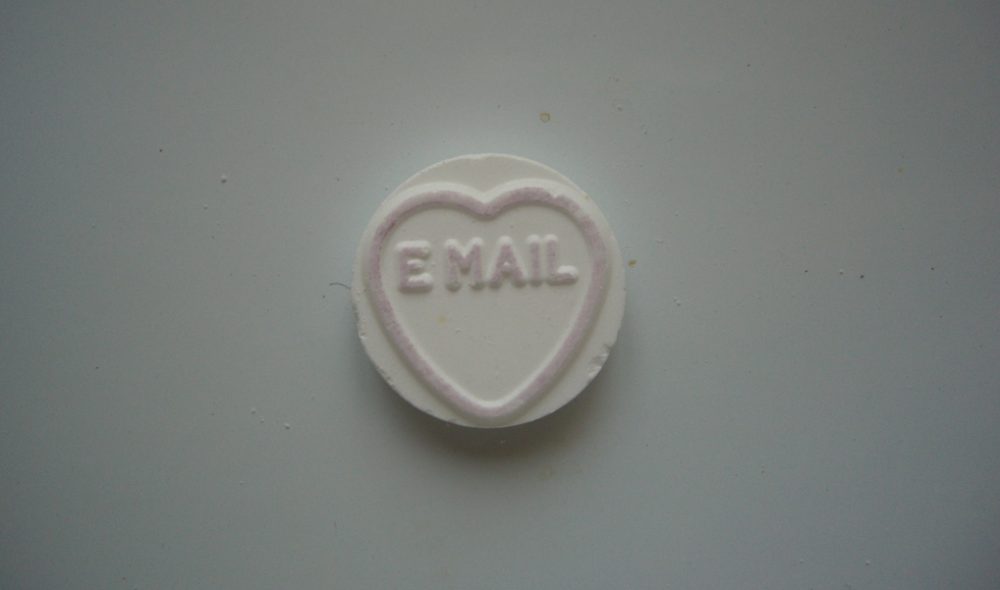 Today’s guest post is by Ricardo Fayet (@ricardofayet) from Reedsy.

When authors ask me for marketing advice, one of my first questions for them is: “Do you have a mailing list?” Too often, the author will say no. So my first piece of advice tends to be: Sign up to MailChimp and set up your mailing list.

At least, until recently. As I was writing our latest Reedsy Learning course on how to set up and grow your author mailing list, I decided to do a bit of research on the other mailing list service providers out there. I wanted to see if it’d make sense for authors to go for an alternative service.

As a first step in my research, I decided to run a quick survey among Mark Dawson’s Facebook community to see what percentage of authors there used MailChimp — and what service providers the others opted for, instead.

While it was a small sample, it showed that MailChimp was getting some serious competition from two main services: MailerLite and ConvertKit.

Before we get into the heart of the matter and see what MailerLite and ConvertKit offer that Mailchimp doesn’t, let’s take an in-depth look at the leader in email marketing: MailChimp. We’ll use Mailchimp’s features as a basis for comparison with the other two.

You’ve probably heard of MailChimp, the market leader, already. As a disclaimer, I should say that they’re the ones we use at Reedsy—so it’s the platform I’m the most familiar with.

Now, these features are (for the most part) also available on MailerLite and ConvertKit. So what makes authors prefer MailChimp?

MailChimp has by far the best interface when it comes to creating and designing your emails. Its “email editor” is both powerful and user-friendly, letting you seamlessly drag-and-drop images, gifs, text, buttons, footer content, etc. Moreover, because MailChimp is the most widely-used email marketing service in the world, pretty much any service out there integrates with them: WordPress, LeadPages, Facebook Ads (via Zapier), webinar platforms, book giveaway platforms, etc. These integrations are what truly sets MailChimp apart from the competition.

Now, if Mailchimp was perfect, everyone would be using it and this piece wouldn’t exist. We’ll explore its flaws more in-depth as we take a look at the qualities of the competitions.

Pricing: MailChimp offers a “forever free” plan that covers all of their features (including automations). The caveat: it’s limited to 2,000 subscribers. Beyond 2,000 subscribers, you need to start paying — and as your list grows bigger, Mailchimp’s monthly charge can get quite heavy.

Automation triggers: The other limitation of MailChimp has to do with automation workflows and the options for triggering them. You can trigger emails based on list activity (e.g. “opened campaign X,” “finished automation Y,” etc.) or subscriber data (when a subscriber updates their preferences). But you can’t, for example, trigger an email to subscribers who clicked on a particular link in a previous email.

Takeaways: Of all the email marketing service providers out there, Mailchimp can by far give you the best functionalities and user experience when you’re designing your emails. However, their pricing can be prohibitive as your list grows, and their segmenting and automation-triggering options are somewhat limited.

MailerLite came a close second in my survey, so let’s try to see why MailChimp is losing market share to them among authors. The first and foremost reason is…

Pricing: As I mentioned, the main criticism MailChimp receives is that it can get quite expensive when your list gets big. Not only is MailerLite much cheaper (hence their name?), they also won’t double-charge you if you have the same subscribers in two different lists. 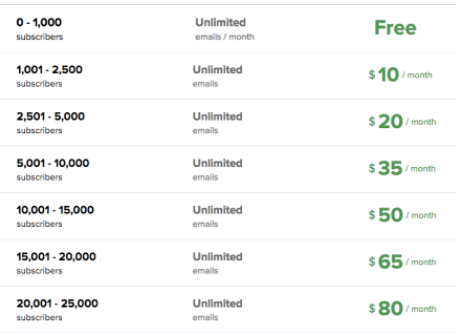 As you can see, while MailerLite’s pricing is more limited than MailChimp’s (1,000 subscribers versus 2,000), MailerLite gets a lot more advantageous as your list grows. At 30,000 followers, for example, MailChimp charges you $215 per month. With MailerLite, it’s $95 per month.

Features: As its name indicates, MailerLite is like a “lite” version of MailChimp. You’ll have a lot less integrations with other services (though they do have a WordPress plugin), and will also have to sacrifice some automation and design possibilities.

But unless you want to create really intricate email templates or require complex automation workflows, this “lite” version might actually be easier to get to grips with. Their automation interface, for example, offers less trigger options, but is much easier to use.

Also, MailerLite seems to constantly be adding new features. For example, they recently made it possible to “tag” subscribers in your lists based on their actions (“clicked on link X in email Y”). Incidentally, this feature used to be one of ConvertKit’s biggest competitive advantages.

Takeaways: MailerLite is a good option if you have a big list and want to save on costs. Personally, I’m a big fan of MailChimp’s user interface, and much less attracted to MailerLite’s. But many other authors have expressed contrary opinions, and I have to recognize that, feature-wise, both services are fairly similar.

Recommended read: Why we switched from Mailchimp to Mailerlite by Roman Drits

ConvertKit is therefore much more powerful when it comes to list segmentation and automation workflows, but has a much more simplistic approach to email design. 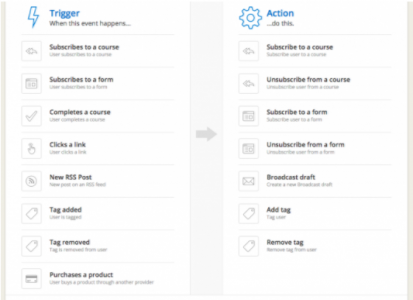 Better segmentation and targeting: The one feature ConvertKit users seem to love most is the ability to “tag” subscribers based on their actions: “clicked on X link,” “downloaded Y infographic,” “attended Z webinar,” etc.

This makes it very easy to then design ultra-targeted email campaigns and automations. For example, let’s say that you set up a preorder for an upcoming release. Then you send an email to your list to let them know about it — with a link to preorder the book. You can tag the people who clicked that link, and email just them when the book launches to ask them for an honest review.

Analytics on sign up forms: If you’re a nonfiction author or blogger offering lots of content for free to generate signups, then you’ll want to be able to build and test lots of different signup forms.

That’s another one of ConvertKit’s strengths. You can easily generate signup forms, embed them anywhere on your blog with the WordPress plugin, and then track their conversion rates directly within the ConvertKit interface.

Simpler, more reliable automations: The more signup forms you have, the more automation workflows you’ll need to greet your new subscribers. ConvertKit probably has the most powerful and user-friendly interface when it comes to building automation workflows. It allows you to choose between a whole range of triggers and actions (many of which aren’t available through MailChimp).

Very limited design options: As we’ve seen previously, both MailChimp and MailerLite offer a feature-filled email template tool that lets you design your email with images, typography, social media buttons, etc. ConvertKit’s email template tool, in comparison, is incredibly simplistic. In the words of their founder:

We’re pretty opinionated here at ConvertKit. We ran a bunch of tests and found that simple emails that look like they were written by a human perform better than fancy template emails. Because of that we don’t have a fancy drag-and-drop template building like MailChimp. If that’s important to you, then stick with MailChimp.

Pricing: As opposed to MailChimp or MailerLite, ConvertKit doesn’t have a “free forever” plan. Their first plan starts at $29/month, and once your list grows beyond 5,000 subscribers, you’ll need to negotiate a custom plan. Like MailerLite (and unlike MailChimp), ConvertKit won’t count a subscriber twice, even if you’ve got that subscriber in different lists.

Takeaways: ConvertKit was built with a very specific target market in mind: professional bloggers. If you have many opt-in incentives and each requires a different automation, or if you need more trigger options in your automations, then give ConvertKit a try. They have a 30-day refund policy.

Recommended read: Why we switched from Mailchimp to ConvertKit by Donnie Lawson

Have you switched email service providers? What has your experience been? Share in the comments.

Ricardo Fayet is one of the founders of Reedsy, an online marketplace of top editorial, design and marketing talent. He’s the author of several Reedsy Learning courses, including the course that spurred this blog post: How to Set Up and Grow Your Author Mailing List. Reedsy Learning courses are all free and delivered in your inbox every morning, so give them a try!