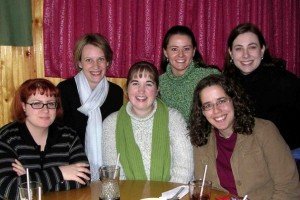 My colleagues at F+W, sometime around 2005

It will be hard to think back on Cincinnati without thinking about F+W, the whole reason I moved to the city in the first place.

It was a promising and lucky career start, even though I wanted to leave the company— and city—initially. I had dreams of joining Peace Corps or teaching English in Korea. But I stuck with F+W, because I was attached to someone else who couldn’t leave Cincinnati.

That ended up being a good thing. We tend to shine in times of dedication and consistency, even when it’s forced upon us. Maybe we can look back and feel value and accomplishment in what we did, even if it wasn’t entirely our choice.

For 10-plus years, my waking life in Cincinnati revolved around career development. This is how I’ve always preferred it, and I’ve always genuinely enjoyed my work. 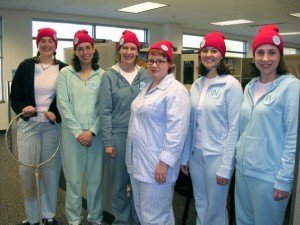 As a result, my closest friends in Cincinnati are—and mostly remain—the people I worked with at F+W. Over the years, my colleagues and I discussed everything and anything, including office crushes. Mine was a guy who worked in production. I remember the first time I ever saw him. He briskly approached my desk with page proofs and pointed out mistakes I had made. I felt like a moron—as if I held the wrong job. (At the time, I’d held my editorial job for about two years.) I apologized, smiled, and promised to take care of the errors. He nodded and left without any chit-chat.

From day one, production guy terrified me. I knew I couldn’t live up to his expectations. He was going to be circling my every mistake from that day on out.

Fortunately, I changed positions, moved away from detail-oriented work, and didn’t have to endure his critical eye for long. However, the people I managed still worked with him directly. One day, my managing editor came to me in tears. Production guy wouldn’t let her make last-minute corrections on a book before it was sent to the printer, due to a new corporate policy. So I went downstairs to talk to him, and asked him to make an exception, just this once.

We stared for a good long while.

I promised this would be the only time I’d come begging on behalf of my managing editor.

He said this was the only time it would work.

Not long thereafter, I left F+W. Things weren’t bad, but I felt bad. I desperately wanted to be content, yet I wasn’t. So I left. It was a straightforward decision once I found another job I knew I would love: teaching at UC.

I’ve only been at UC for two years, and things have gone well. I feel good. I am content. I haven’t wished for anything else. And furthermore, Cincinnati is headed for its national moment in the spotlight. It couldn’t possibly look any better for this town, and every time I read a new article about its boom, I wonder again, “Why am I leaving?” E.g.,

It’s a strange thing to leave—a place, a job, a situation—when things are good. If you’ve found contentment and peace, what motivation is there to leave? Isn’t that asking for trouble? Why disturb calm waters?

Around the time I was deciding whether to stay or go, I happened to read an issue of one of my favorite e-mail newsletters, Be Slightly Evil, which is hard to describe, but is basically a life philosophy newsletter. Here’s a snippet of what I read.

… [A]cting for the sake of acting (otherwise known as creative destruction), and choosing churn over stability, is central to life. This is not “good” because it does not equal a belief in change as progress. But it is also not “evil” because it is not a belief in value-driven stability. Action … favors chaos creation.

To read the original passage in its original context, click here.

The concept of creative destruction goes back to the Hindu god Shiva, simultaneously destroyer and creator. Today, the term is now used regularly (and sometimes sickeningly) in business to put a dynamic, edgy spin on disruptive changes.

It’s funny how often, when speaking to people about my move, they say, “It’ll be a new adventure!” I use the same language too. As a culture, I think we tend to value adventure. Much popular entertainment is built on the call to adventure. But I’m not convinced it’s better to seek out adventure. It means saying yes to creative destruction, welcoming chaos, and hastening loss. (I’m reminded of the lyrics to a favorite Mason Jennings song: “Loss is brutal, I can’t stand it, I wonder how you can.”)

Unlike my career, my relationships (especially romantic ones) have been driven by adventure, risk, and loss; churn over stability; a continuous learning process—not just about myself, but the pattern of existence as reflected by a relationship’s beginning, middle, and end. It keeps teaching you something, long after it’s officially over. What the relationship was changes. How you see yourself changes.

I recently finished watching a series, Any Human Heart. It makes a good argument for how each of us is changing all the time. We’re never the same person twice. But it would be hard (impossible) to function if we were truly aware and cognizant of the fact.

When I left F+W for UC in 2010, I found myself all too aware of this reality. I was completely adrift and losing my center. Too much change, not enough anchor. A wild-hair notion came to me. I asked my office crush, the production guy, on a date. He said yes.

His name is Mark, by the way.

Nearly two years later, Mark has also said yes to moving to Charlottesville with me. (Don’t worry; he’ll still be working for F+W and catching editors’ mistakes.) I like the idea of our relationship overlapping cities. It feels like parts of life aren’t irretrievably gone and lost all at once. Plus, embarking on a new life in a new city as part of a partnership is a new kind of adventure for me. Charlottesville is something we’ll discover and experience together, and Cincinnati is something we’ll remember together. 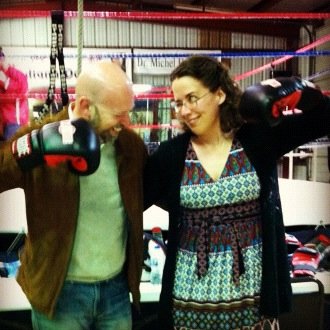 I have loved this series, Jane! Each one is so special! Thank you for sharing such personal feelings.

Appreciate you sticking with me. 🙂

Almost got you speechless! 😉

Aw…so romantic; it sounds like the plot of a sweet book. Best of luck to you and production guy!

Jane, you will surely be missed, but I’m glad it won’t be by Mark. What a wonderful story.

Thank you! … And … I’m looking forward to seeing where Rachel’s adventure takes her. 😉

Jane thank you for sharing the road you are hiking. The love you create in each moment is the beginning middle and end.

Thank you for sharing, damn if I didn’t get teary eyed! Good luck in your new hometown! We writers salute you 🙂

Aww! Appreciate you reading and commenting.

What a fun story! Wishing you much positively creative destruction in your new (ad)venture(s)!

Jane, I’ve left two good jobs, where I was pretty durn content, just to stir it up or let the restlessness you describe have its day. I haven’t regretted it (well, maybe on SOME days), and feel lucky that we can still experience surprise and draw on resources we don’t know.

Good luck to the both of you in Charlottesville. (If you see Thomas Jefferson hanging around a UV coffee shop, tell him hello.)

Thanks, Tom! I’ll keep you looped into my Jefferson sightings. I might even start a special photo album.

Oh my goodness, another wonderful love letter. And, of course, that is a great photo at the bottom. 🙂

I’m so glad Mark is going to Charlottesville with you. I’ve been worried like a mama about that. You two are so good together. Love you both. 🙂

🙂 Thanks so much, Darrelyn—for taking such a memorable photo, for taking us to the boxing club, for letting us share Louisiana farm life with you, for … well, I could go on all day. xoxo

Great story about Mark the production guy — production guys always seem to save the day for editors in newsrooms where I’ve worked — and good insight about leaving vs. staying. When newspapers went into a tailspin a few years ago, I ran across a yoga mantra that called to Shiva and translated to (roughly) “We celebrate the dance of energy that is creation.” It was a lifeline to hold onto during a time of turmoil, and something I’ve come back to time and time again, even as things have stabilized. Sometimes it really does make all the difference to… Read more »

Thanks, Jennie. I feel like doing some more reading about Shiva and the creative destruction concept (as it relates to overall life, not business strategy). About all I know I learned from Alan Watts lectures.

Jane, I’m so happy to hear that you have Mark to be your keel as you cross this ocean to a new life. I know how difficult it is to pick up and move. You’re not losing because you are holding onto your relationships that you have nurtured there along with all the memories you’ve created. You and Mark will have such a good time getting to know Charlottesville. I’m so excited for you. In recent posts, you’ve talked about the rituals (like the coffee shop) that you have developed in Cincinnati. With your awareness of the importance they serve… Read more »

🙂 Appreciate your wisdom (which I’ll try to heed)—and optimism.

Charlottesville! Will you be teaching at UVa? I went to school there. It’s a wonderful place to live. Rural beauty, yet a sophisticated populace because of the university. The Blue Ridge Mountains, Monticello, sweet little restaurants and cafes, plus you are only 2 and a half hours from D.C. if you want major culture. You will never look back.

I may teach at UVa, but not during my first semester there. Focusing on web work for VQR!

You would have really disappointed me had you not mentioned mark and you are now together 😀
This is one of the nicest posts I have read in a long time. Keep writing!

Very nice to read the personal side of you…

Good to get to know how you arrived on your current path. I just finished watching your tutorial on author platforms which was great and had to check out your blog. Good luck on your new venture!

It’s tough making a change to any new city, but especially when you’ve ended up loving the place you live. Hope all goes well for you at UC. From your work, and determination it seems like you’ll ‘bloom where you’re planted’ . ll the best.

“To freely bloom—that is my definition of success.” (Gerry Spence)

Great reminder, Jane, that we “can never go back” and be who we ever were before. But geesh, don’t we often want that? Why do we have this pull to stay put or go back? Homeostasis? As you say, that longing relates to being kicked off-center. When off-center feels so unanchored, we can barely breathe. It’s never easy to say goodbye. To cities. To jobs. To ideas. Thankfully, doing so gets us to that other new place where we grow.

Wishing you and Mark MUCH success in Charlottesville!