A panorama of Coffee Emporium in OTR (Cincinnati)

Note: Read the earlier installments in this series, #1 and #2.

My favorite places in Cincinnati are mostly tied to ritual. But I didn’t even believe in ritual until recently, around the time I read Eat, Pray, Love by Elizabeth Gilbert. She writes:

This is what rituals are for. We do spiritual ceremonies as human beings in order to create a safe resting place for our most complicated feelings of joy or trauma, so that we don’t have to haul those feelings around with us forever, weighing us down. We all need such places of ritual safekeeping. And I do believe that if your culture or tradition doesn’t have the specific ritual you are craving, then you are absolutely permitted to make up a ceremony of your own devising, fixing your own broken-down emotional systems with all the do-it-yourself resourcefulness of a generous plumber/poet.

In addition to ritual, I also became a believer in routine—probably ritual’s twin sister, hardly distinguishable. I used to think routines would make me boring, predictable, and uncreative. Quite the contrary. If you’ve read any of Jonathan Fields’ Uncertainty, you realize that routine represents a certainty anchor—a stabilizing and trustworthy force that leaves you free to take risks elsewhere.

For the last few years, my ritual or routine, whichever you’d prefer to call it, has revolved around Coffee Emporium, a coffeehouse about a 5-minute walk from my apartment, in OTR. I take my laptop and start the day in a lively environment where the baristas know my order, the sun shines bright, and the ceilings are high. 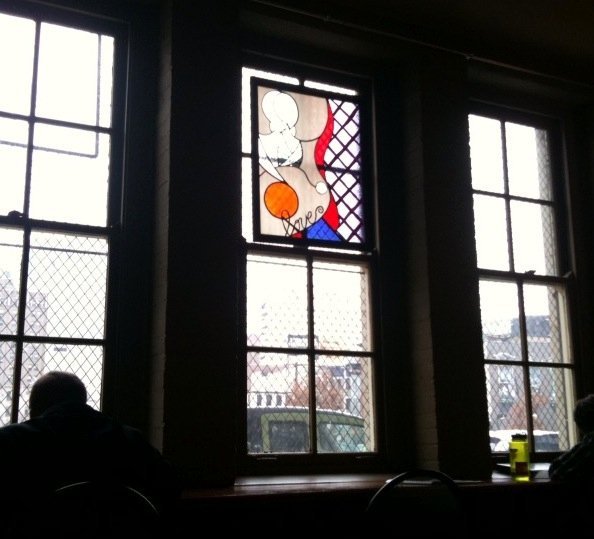 It’s probably the first ritual I ever consciously created for myself. When I first arrived in the city, in 1998, I had no activity that anchored me except for a morning run. Later, when M and I were together, we fell into a Friday night ritual of movie, dinner, and bookstore browsing. It could’ve been duplicated in any city, but I never realized how central that had become to my week’s structure until it was gone.

I don’t know that anyone faces the end of a marriage with a clear understanding of how life changes, but I did nothing to mark the change in my life, nor did I seek any new rituals or support. I had yet to see any importance or relevance in rituals, and furthermore, my modus operandi was to ignore beginnings & ends until I had a nice, good, long distance from them.

Fortunately, though, I did move to a new neighborhood (OTR), which forced me to discover new places and activities that I could truly call mine, and that I came to love.

The first and most important of these was the Roebling Bridge, part of my daily running route. Roebling is the suspension bridge over the Ohio River, connecting Cincinnati with Covington, Kentucky. When built, it was the longest suspension bridge in the world, at 1,057 feet, and it’s considered the precursor to the Brooklyn Bridge. 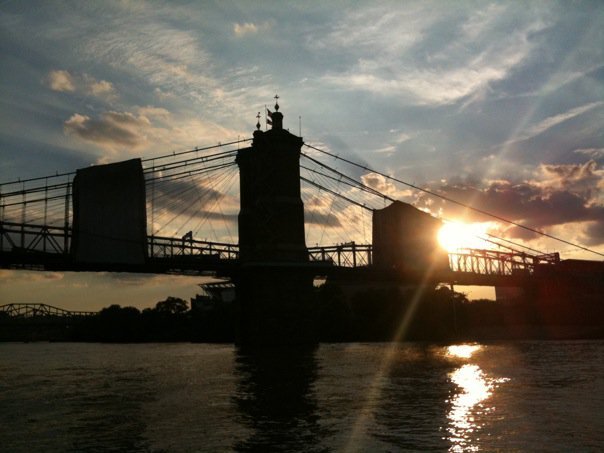 Roebling Bridge at sunset (and under construction in 2010), Ohio River

I’ve probably taken more pictures of the Roebling than any other structure in Cincinnati. While I worked at F+W, I even brainstormed a new imprint called Rubico that used the outline of the Roebling towers as its logo. 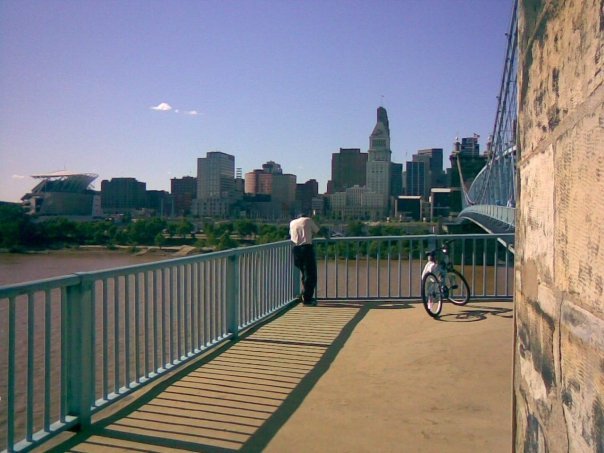 View of downtown Cincinnati from the Roebling Bridge

As months and years passed, many little places downtown began to play a role in relationship rituals—having drinks at certain places on a date (Grammer’s—while it was still open—and Neons), returning to a particular restaurant for special romantic celebrations (The Palace, Nicola’s), reserving intimate conversations for this or that lounge (The Celestial, The Cricket at The Cincinnatian). 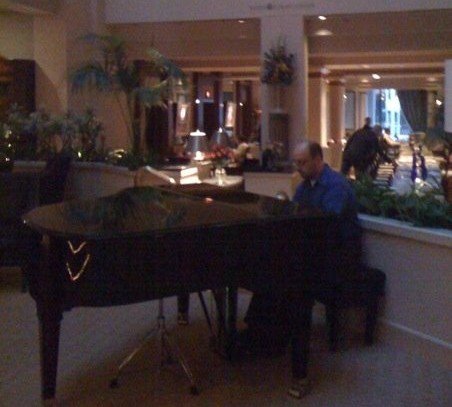 The Conductor plays piano in the Cricket Lounge at The Cincinnatian

There are some rituals I always wanted to have in Cincinnati, but never managed to develop. I wanted to spend Saturday mornings at Findlay Market, but could never seem to get up early enough (or feel motivated enough to join the crowds).

I also wanted to have more rituals connected to the holidays and Cincinnati traditions, but that never happened either. I usually saw the Labor Day fireworks by accident while driving south on I-71; I never attended a Reds Opening Day parade; I never went to Oktoberfest even though it was only blocks away from home, I never went to a Taste of Cincinnati. 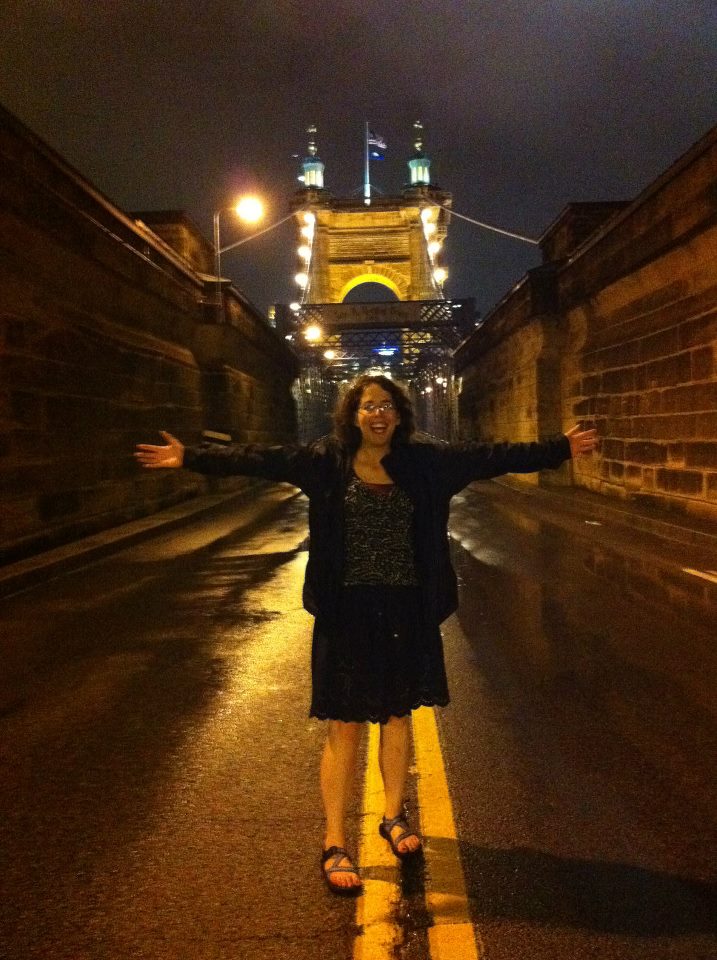 One of the few Labor Day fireworks celebrations I attended in Cincinnati, in 2011. I’m standing on the Kentucky side of the Roebling Bridge—emptied out due to fireworks over the river.

But I don’t regret any of that. The places and times most dear to me are tied to meaningful moments in a relationship (both platonic and romantic) that often happened entirely by accident, or became important long after the fact … those times when we came to a new understanding, dared to dream about an entirely new future, or even argued about fundamental differences.

The last place I’ll be in Cincinnati, the Saturday morning I drive off, is Coffee Emporium. I’m already envisioning my last time through that door, wondering exactly what a good-bye looks like, and leaving with caffeine in hand, to find new rituals in Charlottesville.