I read Claire Cook’s recent blog post with great interest and a jolt of recognition. OMG. She was telling my story! I wasn’t alone. There were other authors like me who were traditionally published in what now seems a bygone era, and who’d enjoyed runs on the New York Times bestseller list and all the benefits therein—book tours, media escorts, an honest to God marketing/publicity budget … Can any of us remember that far back?

I know from my husband, the aviation geek, that when a plane goes into what’s called a death spiral, as it reaches a certain altitude and succumbs to the pull of gravity, it can’t pull out. The same holds true for authors: fewer orders results in smaller print runs, a smaller marketing budget and lackluster sales, then a smaller advance for your next title, and the vicious cycle continues. In short, you’ve entered the “death spiral.”

The cold, hard truth is this: If the sales figures for your last title weren’t impressive enough to get booksellers to order your next title in sufficient quantities to make an impact, you’re basically screwed. It doesn’t matter if your previous titles sold a combined six million copies worldwide. You’re only as good as your last sell-through.

What’s even more dispiriting is that you’re perceived as a “failure” by publishers when your sales haven’t dropped but aren’t growing. You become a flat line on a graph. The publisher loses interest and drops the ball, then your sales really do tank. Worse, your poor performance, or “track” as it’s known, is like toilet paper stuck to your shoe, following you wherever you go in trying to get a deal with another publisher.

If you’re among the lucky handful to not only sell your first novel to one of the Big Five, but get a nice-sized advance, first of all, let me congratulate you—that’s a remarkable feat in today’s publishing climate. I don’t want to burst your bubble, but here’s the thing: Unless your book is the lead title in the publisher’s spring or fall catalogue, you’re more or less on your own as far as marketing and publicity is concerned. Marketing/publicity budgets for all but a handful of fortunate front list authors like my good friend, Kristin Hannah, are, sadly, a thing of the past. I’m only telling you this because it’s better to know going in than find out after the fact. You must do as much of your own publicizing, through social media outreach and whatever else you can drum up or afford, for your book to have a chance of succeeding.

So here’s what happened to me: My loyal fans, God bless them, were still out there and clamoring for my next novel. For the publishers who’d once courted me, it was “meh.” The recession only worsened what had begun with the less than stellar sales of a novel of mine that came out during:

Any one of the above would’ve been a blow. The combination was crushing.

I won’t bore you with the details of what came next. Suffice it to say, my career never fully recovered. The irony was that my inbox was blowing up with emails from fans begging for a fourth book in my Carson Springs series. I had to break the news to my loyal readers, gently, that the series was no more.

Flash forward: Recently I found myself at a crossroads when my author friend, Josie Brown, suggested I go indie. She’d made the leap from traditional publishing a few years prior and was reaping the rewards. She’s also a savvy businesswoman with a background in marketing and advertising. I wasn’t sure I was up to the task. I’m a writer. That’s what I do—I write. I flunked math in school. I was one of those grumpy authors who had to be dragged into doing social media (which I’ve since come to embrace). She persuaded me by posing a question: “What’s the alternative?”

I realized the only alternative was to keep doing what I’d been doing that wasn’t working. I was like Charlie Brown with the football, hoping I’d get lucky and that, just once, the football wouldn’t be snatched from beneath me when I went to kick it. I’m at heart an optimist. But I’m not stupid. So I took heed of Josie’s advice and gathered up the courage to embark on a different path.

And something wonderful happened along the way.

My creative wellspring that’d been drying up, due to all the discouragement I’d received over the past few years, was suddenly gushing. An idea for a mystery series, something I’d long dreamed of writing, came to me during a walk on the beach in my hometown of Santa Cruz, California, where I lived before I moved to New York City. Why not set my mystery series in a fictional town resembling Santa Cruz? I even had my heroine, property manager/amateur sleuth, Tish Ballard, a recovering alcoholic who doesn’t buckle under adversity or authority, sketched out in my mind. 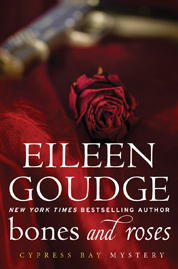 Thus was born my Cypress Bay mystery series. I immediately got to work. I was on fire! The book practically wrote itself. Book One of the series, Bones and Roses, comes out today. Click here to read an excerpt.

I’m excited again about the possibilities the future holds. Nothing is a given, of course. The self-publishing landscape is like the Wild West in one respect—it takes a hardy soul to carve out a piece of it and the mortality rate is high. I’ve never worked harder in my life, not even when my kids were little. I’ve had to learn a bunch of new tricks I didn’t think this “old dog” was capable of. I have more social media platforms than I do platform heels in my closet (I’m addicted to my Sketchers Go Walks, and besides, these days I no longer do power lunches, which means no executive threads, and who has the time to dress up for evenings out when they’re working all the time?).

Was it worth it? Only time will tell. Meanwhile there it is, beating in my breast: that feathered thing called hope. Something I thought I’d lost, regained. Something to celebrate.

Eileen Goudge has published 32 novels for young adults (six titles for the Sweet Valley High series among them), and 15 women’s fiction novels, including the New York Times bestselling GARDEN OF LIES, as well as numerous short stories and magazine articles. And a cookbook, inspired by her passion for baking: SOMETHING WARM FROM THE OVEN.