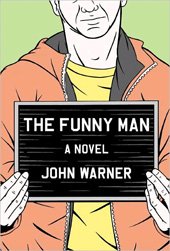 I’ve known John Warner since my days as an acquisitions editor at F+W Media. He is among the most decent, classy, and talented authors I’ve ever had the pleasure of working with. I acquired and edited three of his humor books at F+W (though only two were published—long story), and we partnered on a short-lived humor imprint that deserved more attention than it received, like so many things in publishing.

John is an editor at McSweeney’s Internet Tendency, and has a long career in writing and editing humor. This month, his debut novel, The Funny Man, releases from Soho Press.

I was curious about how things are going pre-launch, and he graciously agreed to this Q&A. If we’re lucky, he’ll be back next year with a post-mortem.

Let’s read the tea leaves. You have solid reviews from Publishers Weekly and Booklist. The Daily Beast has named your novel one of the best debuts of the fall season. You recently wrote a beautiful essay for The Millions that ties into your novel. The Picky Girl has recommended you. You have blurbs from all the right folks (Brock Clarke!). Do you think this is sufficient word of mouth to sell the book?

I am and always will be eternally grateful for all of these things, the Daily Beast mention alone is more than most books get, and the Brock Clarke blurb makes me blush, and the Picky Girl made my week if not my month with her review, but by themselves, these are not even close to “enough” to sell the book in anything other than relatively paltry, “friends and family,” numbers.

That said, I’m hopeful that all these little sparks have the potential to catch fire. I’m not expecting “call-the-forest-service-and-drop-in-the-smokejumpers” fire, but something like “Whoa! Now that’s a fire!” fire would be nice and probably do enough to allow me to do another one, which is my goal. It’s impossible to know what mention or connection will lead to some kind of tipping point, so every single last one of them counts.

At one point, the pre-order for the Kindle version of your book hit $2.69, probably due to a spike in pre-orders. The publisher’s earnings, and thus your royalties, aren’t harmed by this (Amazon is the one who loses money), but I wonder if it worries you. Many people think this sort of “dynamic pricing” can hurt the value of a book. Others think it’s smart marketing. Thoughts?

I am very aware of the potential for low prices to harm the perceived “value” of a book, and it concerns me plenty. In a world where no books are priced more than 99 cents, a lot of people who do this professionally will no longer be able to do it professionally, and while I’m a big believer in the potential for digital technology to give voice to writers who fall outside the traditional publishing gatekeepers, I’m also worried about a world where fewer and fewer writers can make anything close to a living on their work.

On the other hand, looking at it from a reader’s point of view, the $2.69 price seems about right for a pre-order for a digital copy of a book by a guy they’ve never heard of. The world is not beating down the door for copies of my book, so offering it at a reduced price to spur interest is something I’m ultimately comfortable with. It’s like in the grocery store where the generics are two for one and you try it because it’s such a good deal, and then realize that it really is just as good as the name brand. (Did I just compare my novel to generic food? I really do need help with the marketing.)

If I ever hit the level of someone like Tom Perrotta (whose new book, The Leftovers, is terrific), an established author with a great track record, I can expect to see my book priced higher. Right now, if the low price induces someone to take a chance on the book, that feels both good for me, and good ultimately for reading and books in general, but maybe I’m just trying to have it both ways.

You have a mini-tour of the East Coast planned. Word on the street is that author tours suck up a lot of time, energy and money for very little sales. Others say it’s a great networking opportunity—that you can’t expect to pull direct profit from it, but the long-term rewards are tremendous. What do you expect to get out of it?

Yes, yes, and yes to time, energy and money, I’m tired and I haven’t even left yet. I have made the schedule as compact as possible to save time, and am crashing on couches to save money. For energy, I will mainline Red Bull.

I think the tour has the potential to build word of mouth and draw media attention and therefore drive sales, but none of those is my reason for doing readings and appearances. I’m primarily doing it because it’s going to be fun.

In New York, I’ll be reading with Teddy Wayne, Sarah Walker and Ben Greenman, people I’ve been editing on McSweeney’s for years. I’ll get to have lunch with my agent who I’ve never met in person, and drink beers with my editor who I’ve also never met in person.

In Boston, I get to read with fellow McSweeney’s editor Chris Monks, a guy I’ve worked with for years, whose book I edited and whom I’ve also never met.

WriterHouse in Charlottesville invited me to come over a year ago, and I’ve been looking forward to it ever since.

Later on, I’ll be reading at both my undergraduate and graduate alma maters where I’ll reconnect with old friends and mentors and probably get a little weepy. If I sell books, it’s gravy. This is mostly going to be a fun trip. Plus, it’s partially tax deductible.

What other marketing and positioning strategies do you and your publisher have lined up? What do you have high hopes for and/or what do you have serious doubts about?

I’m not privy to every last plan, but I think there’s going to be some ads on websites, lots of work at getting word of mouth going, that kind of thing.

One of the things that I’m hoping pays off is AuthorBuzz, which is largely invisible to the average reader, but I think is a great way of getting grassroots word of mouth going among the bookselling community.

For most books like mine, to sell “well,” interest has to come from the ground up, rather than the top down, it’s driven by readers rather than by media attention, and AuthorBuzz is the kind of thing that I’m hoping accomplishes that.

If any media attention does come from the book, it’s going to be because some reader with those connections made it happen.

Of all the authors I know, I’ve always felt you had the most amazing platform and network of relationships, which you are very quiet about. Maybe it’s modesty. And maybe it’s the fact you’re not very “noisy” on social media. Will that change now that you have a novel out? Are you lurking on GoodReads? Getting on Twitter? Amping up your presence on social media in any way? Are you seeing any impact so far?

I suppose I do have a pretty wide and deep network of friends and acquaintances related to writing and bookselling, but this list is something that’s grown incrementally over the years, primarily through editing, rather than writing.

I may be a debut novelist, but I’m also not so young (41), and just by living, you pick up some connections along the way. Also, because I primarily work with these people as an editor, my role has always been to be of service to them (as “my” writers) rather than the other way around. It feels weird to try to flip that equation, and I never want them thinking that there’s some kind of quid pro quo for my ongoing advocacy of their work. I work with and champion them because I think seeing more of their work in the world is a flat out good thing.

I haven’t been noisy on social media because I come from a deep Midwestern mentality that you shouldn’t be making noise unless it’s purposeful and interesting, so it’s not a comfortable process. That said, I’ve ramped up my Facebooking and I do have a Twitter feed, and I’m trying to use it for good. It’s just not something I’m particularly fantastic at, or comfortable doing, even though I know it probably has benefits.

Most of my writer friends have been fantastic about spreading the word through every means possible, which doesn’t surprise me in the least. They’re good people.

You recently started a site/service called The Staff Recommends (TSR), which recommends books for people to read next. It’s an interesting advertorial model, in that IF you and your staff discover a book and love it, then publishers can pay to have their book featured on your site. I wonder if this model was inspired by the fact you grew up in a family that owned a bookstore? How’s it going so far? I’m sure publishers are curious to know what impact your coverage has.

The idea for The Staff Recommends was all Andrew Womack, of The Morning News, so I can’t say I inspired it, but I can say that watching my mom recommend books for better than 20 years when she owned her store is something I think about often both with TSR and my Biblioracle work.

Before I was a writer, I was a reader, and the sensation that comes with really connecting with a book simply can’t be duplicated by any other medium. It is true virtual reality, where your consciousness joins another in a deep and inexplicable way, and it is awesome. I started writing because I wanted to be able to do that from the other half of the equation, but to be able to hook other readers up with books is often just as good.

I think all the books that have been featured on TSR have seen tangible benefits to their sales, but like everything else, it’s only one part of a much larger equation. I do it because it gives me a professional excuse to read (not that I need one). 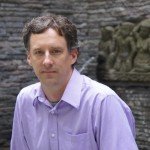 John Warner is the author of four books, including Fondling Your Muse: Infallible Advice from a Published Author to the Writerly Aspirant, acquired and edited by Jane Friedman before she sold out and became a professor of all things. He’s editor at large of McSweeney’s Internet Tendency and a one-man book recommending service known as The Biblioracle. He teaches at College of Charleston, and The Funny Man is his first, but hopefully not last, novel.