“Your assumptions are your windows on the world. Scrub them off every once in a while, or the light won’t come in.”  —Isaac Asimov, author, professor of biochemistry

Perhaps you are holding assumptions about whether you do can do public speaking well, or even have the potential to do it well. I ask that you take the advice of Isaac Asimov in the quote above; scrub those assumptions off. The skills of good public speaking can be learned. The tools can be utilized. It’s not rocket science. The biggest obstacles for most potentially fabulous and inspiring speakers are the attitudes and assumptions they hold, and the lack of a few simple skills they can develop when willing.

I coached one author to help her prepare for her book launch. She wrote a stunning book. In the first moments of our time together, she boldly announced, “I know that I’ll never be one of those WOW kind of dynamic, charismatic public speakers. I just want you to help me to get through my book launch without humiliating myself.”

Doesn’t “not humiliating yourself ” seem like a pretty low bar? What self-limiting beliefs do you hold about yourself as a speaker? I propose that these beliefs may or, more likely, may not be accurate. What’s more, even if they’ve been accurate in the past, they do not have to be so going forward.

Public speaking skills are more akin to musical or athletic skills than intellectual knowledge alone. Mastery does not take place simply in your brain; it takes place in your body, in the “doing” of it.

So let’s address the key fears of public speaking, which fall into a few categories.

Fear of Looking the Fool

Over and over again my coaching clients say things like, “I just don’t want to look foolish.” For many of us, the simple fear is this: I just don’t want to feel embarrassed in front of a group of people. This fear may come from our past experiences of feeling embarrassed, being made fun of, or even being ridiculed. Those who’ve had such experiences deserve support and empathy, of course. You also deserve to have your own confident voice, even if you’ve had such experiences. Can there be embarrassing moments in public speaking? Sure!

But if you connect vulnerably, intimately, and authentically to an audience, they’ll forgive you nearly any kind of natural mistake or mishap. Being flawed and human are strengths, not weaknesses. It is our unrealistic, often perfectionistic drives that make us think we must be flawless in front of an audience. If handled with humor and heart, our mistakes may not only be unimportant, they can serve to connect us more intimately with our listeners by showing our humanity and compassion.

I hear a lot of people voice their fear by using the word too. I’m too old. I’m too inexperienced. I’m too shy. I’m too young. I’m too unknown. I’m too overweight.

If you are legitimately under-qualified to talk about a given topic, either get qualified or don’t talk about it. Seems simple. That’s not what the “too” problem is. What we’re talking about here is unfounded self-doubt or what a lot of people call the “inner critic.” This fear is uttered by some of the most highly qualified people in their fields.

I once coached a double-PhD chemist who had served as lead in discovering and developing a revolutionary pharmaceutical product. I coached him for an upcoming presentation of his team’s research findings to gain multimillion-dollar funding to bring the product to market. Despite his education, his qualifications—and what I assert is his freaking genius—this scientist feared that he was “too young” to be perceived as credible. He suggested that a more senior member of his team should make the pitch. “They’ll never take me seriously and grant millions of dollars to someone they think of as a kid,” he said. When I probed, I determined that though he had a youthful appearance, he was no more than a few years younger than the investors to whom he was presenting and senior by far to all of them in his experience and education. His perceived “too young” problem became a little laughable when we did the math.

Finally, he surrendered. “I think I’m just looking for something to disqualify myself, aren’t I?”When we feel we are “too” something, it’s usually self-doubt and little more. After crafting his story and practicing its delivery, my chemist client not only got his funding, he got more than triple what he requested. The investors saw not only the value of his idea, but also the importance of him being the public face of the product as it goes to market. His age was never a factor to them, just a smoke screen of his self-doubt and fear.

The “Not Enough” Problem

The “not enough” problem stems from comparison. We measure ourselves—and all of our perceived shortcomings—against someone we estimate as superior. Introverts envy extroverted presenters who appear at ease, funny, dynamic, engaging, and charismatic and think, “I could never be as good as that.” Extroverts, who have plenty of dynamic energy, may envy a calm, poised, focused, self-possessed speaker, and say, “I could never be as good as that!” Others are more beautiful, more famous, more educated, more whatever. In the game of comparison, the one comparing always comes up short.

The irony here is that when they are in casual conversations, the same people who feel they are not funny/engaging/etc are often all of those things. It’s just when they stand up and feel that they’re doing a “presentation”—when they’re “public speaking”—that they clam up, look down, shut down, and indeed appear “not enough” for the task when they are more than qualified to speak about their topic. But believe me—you’re enough.

What If I Cry? Freeze? Trip? Or Goof Up Big Time?

My clients, across all kinds of industries, have shared anxiety about their autonomic responses (tears, freezing up, panicking, getting hives, shaking, sweating, digestive trouble, the list goes on) that they avoid public speaking for fear that one or more might happen. It’s important to know that it is not the reality of public speaking that causes sweaty palms, hives, trembling, or digestive problems; it is the fear of it that causes these maladies.

Forgetting what you’re going to say or losing your train of thought is a common experience for most speakers, newbies and those with boatloads of experience. It happens all the time and to everyone. Do what the experienced speakers do: Roll with it. Relax. It’ll come to you. People won’t judge you harshly if you lose your train of thought, but they’ll judge you harshly if you freak out about losing your thought, especially if you let it taint the rest of your talk.

The fear of forgetting is often key to the rest of these symptoms. Good preparation for your talk and having simple notes as backup will prevent most public memory loss along with quelling some of the anxiety. The real trick for this worry is to relax and trust that you know your topic and can retrieve the ideas you need to. If you lose your train of thought, simply stand still, pause, put a pleasant, neutral expression on your face (like you’ve planned this all along) and breathe. Take a sip of water. Check your notes if you need to. The thought will come back to you. If it doesn’t, move on. Nobody will be the wiser.

Let’s face it—if you give lots of presentations, some will be better than others and occasionally you’ll have an off day. Preparing and improving your speaking skills will increase your average by a big bunch, but everybody has days when they’re “in the zone”, or when they’re a bit off. I’ve delivered thousands of hours of training, coaching, and speaking. Not every moment would get an A in my own mind—the burden of having high standards—even when the participants gave me high marks. Accepting this disparity as well as the fact that even when I give a stellar class, the occasional participant may not like it, my message, or me, has freed me of worrying about it. I’m not going to say I love it when a class isn’t up to my standards, just that it’s occasionally true. The more you speak, the better you’ll get, but perfection and one hundred percent approval cannot be the goal.

Most audience members will accept human errors and mishaps. It’s all about how you handle them. Do they unravel you, or do you roll with them? Do you have a sense of humor about it, or does your inner perfectionist come out and cause you to show your frustration? 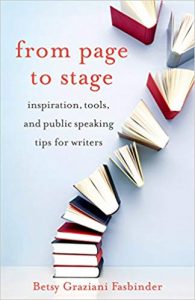 As a writer, you know that sometimes you have to write before the muse arrives, and long before you’re confident in what you’re writing. It’s the same with speaking. Showing up and letting ourselves be our most honest, vulnerable selves ultimately results in courage. If we wait for courage to arrive, it never does. If we act courageously, and show up, courage arrives.

If you found this post helpful, be sure to check out From Page to Stage: Inspiration, Tools, and Simple Public Speaking Tips for Writers.

Betsy Graziani Fasbinder is an award-winning novelist and memoirist as well as a public speaking coach. She now shares her expertise in coaching public speaking in her new book, From Page to Stage: Inspiration, Tools, and Public Speaking Tips for Writers. Find out more at her website.