Subplots help pace your story and keep the tension rising. Unfortunately, the name “subplots” wrongly suggests they are somehow inferior or substandard. It also gives the impression that they are something separate from the main plot—a second story running under the first one and completely disconnected from it. Sometimes I find subplots exactly like that in novels I read—usually the ones that aren’t very good. When the authors realize there’s not enough going on, they stick in a completely irrelevant subplot, about a lost cat or a child’s birthday, that gets in the way of the main story and slows the action.

I prefer to think of story strands rather than subplots as that better explains how they work. The main storyline is your central strand carrying the reader forward toward the final conclusion of the book. Other story strands (or subplots) intertwine with the main one, building it up from a single strand into a fascinating, deeply textured plot that will hold your readers’ interest. If you’ve ever plaited hair, you’ll know that different strands become the top one as you work, and writing an interwoven plot is just like that. Although you have the main storyline running through the whole novel, other story strands will be more important at various stages of the book, and some of the twists and turns in the plot come when you move from one strand to another or when two strands collide. The story strands work together to carry the reader toward the end of the book and some, but not necessarily all, will be resolved at or around the same time as the resolution of the main storyline. Others will be resolved during the progress of the story, but this needs to be done with care or, going back to our hair analogy, you’ll end up with an untidy plait with lots of straggly bits sticking out the sides.

One big advantage in thinking about story strands rather than subplots is that you don’t have to worry whether a strand is big enough to count as a subplot in its own right or is really part of the main story. It won’t make any difference to your writing either way so you can leave that question for people who try to analyze your book after it’s finished. All you need to know is that the strand is there so you can use it to the best possible effect. (Incidentally, the better your book is plotted, the harder it is for analysts to tease apart the various strands of the story.)

How many strands does a book need?

Short stories and children’s picture books work well with just a single storyline. (In writing jargon, they have a basic linear plot.) However, longer novels are more interesting if they have more than one strand and the longer the book, the more strands you can include. My Pony-Mad Princess books are around 7,000 words long and usually have two strands. Usually one is about the ponies and the other is about the royal world, and I always aim to end both strands in the final chapter. For example, the strands in Princess Ellie’s Secret are:

A. Ellie trying to stop her first pony being sold.

B. The problems caused by grumpy Great Aunt Edwina coming to stay at the palace.

(Warning: Spoilers ahead for pony-mad children.)

The plot starts with strand A. Ellie has outgrown her Shetland pony, Shadow, and is horrified when the King declares he must be sold because he has no work to do. She decides that she could drive him instead of riding him so secretly starts training him to pull a carriage. Then, just as everything seems to be going well, the plot twists with the introduction of strand B. Great Aunt Edwina has invited herself to stay at the palace and Ellie’s parents give her the task of entertaining the grumpy old lady. This means Ellie can’t spend any time at the stables.

After a frustrating time with her great aunt, Ellie manages to escape for a while to take Shadow for his first drive (back to strand A). Everything is going well until they turn a corner and come face to face with Great Aunt Edwina, who has gone out for a walk (strands A and B collide and join together). To Ellie’s surprise, Great Aunt Edwina is delighted. She always liked driving when she was a girl and insists that Ellie moves over so she can take the reins. The King is so pleased to find something that makes his difficult aunt happy that he agrees to keep Shadow so she can drive him (strands A and B end together).

In the plot I’ve just described, the strand about the outgrown pony is the main storyline while the strand about Great Aunt Edwina is a secondary strand that’s designed to complicate the plot. But you can also achieve a strong plot by making two strands of your story complement or mirror each other.

In my young adult novel, There Must Be Horses, one story strand is about the way Sasha’s troubled background has left her unable to trust other people, and another strand is about a horse whose troubled background has made him unable to trust humans. As these mirrored strands weave together, the girl and the horse heal each other and solve each other’s problems.

In another type of plot, the story strands are completely separate at first, and readers don’t see the connection between them until later in the book. For instance, in a disaster story, you might introduce three or four completely separate characters in different situations and move between them, building up their individual story strands until some big event (like an earthquake or a war) brings them together. Similarly, in a thriller, you might create one story strand about a detective and another strand about a girl, both of which seem completely unconnected until the girl is murdered.

When you jump around between strands like this, experienced readers will assume that there will eventually be a link between them so they will be looking for it. You can play along with this by hinting at possibilities and building up some tension about when the link will be revealed.

Although this approach can work well, it can be hard to hold your readers’ attention if you jump between characters so much that they are not sure which one they should be caring about. You can make life easier for them by introducing one character first and only introducing the others when their strands meet. So, in the thriller, you could concentrate on the girl until she’s murdered and then introduce the detective’s story strand. Alternatively, you could concentrate on the detective until the murder and then let him piece together the girl’s story as he investigates the crime.

If your story has two or more main strands, it’s sometimes difficult to decide how to weave them together. When I’m faced with this problem, I find it helpful to write a step outline for each strand of the story, putting each step on a separate sticky note and using different colors for each strand. Then I experiment with different ways to join those steps into one coherent plot by moving the pieces of paper around. The result is a single, multi-colored line of sticky notes—much like the plait I talked about earlier.

The main storyline of your book is the one you would talk about if you were asked to describe your book in one sentence. This is sometimes called the elevator pitch, because it’s what you might say if you got in a lift with a top publisher or agent and had to sell your book to them between floors. 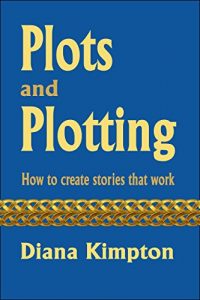 If you work on your plot before you start writing, you may find that one of your story strands resonates with you and starts to take over from that original idea. If that happens, follow your instincts. If you’re sure that you can make the new strand work better than your original main storyline, swap them over. You are only at the plotting stage so it’s easy to do and there’s no major rewriting involved, even if you eventually decide to swap them back.

If you enjoyed this article, be sure to check out Diana Kimpton’s Plots & Plotting.

Diana Kimpton is the author of more than 40 books for children, including her successful Pony-Mad Princess series. She also writes books for adults and has had several animation scripts produced for TV. She lives in the UK, just a short walk from the sea, and spends her spare time looking after her horse, doing art and trying to play the ukelele.