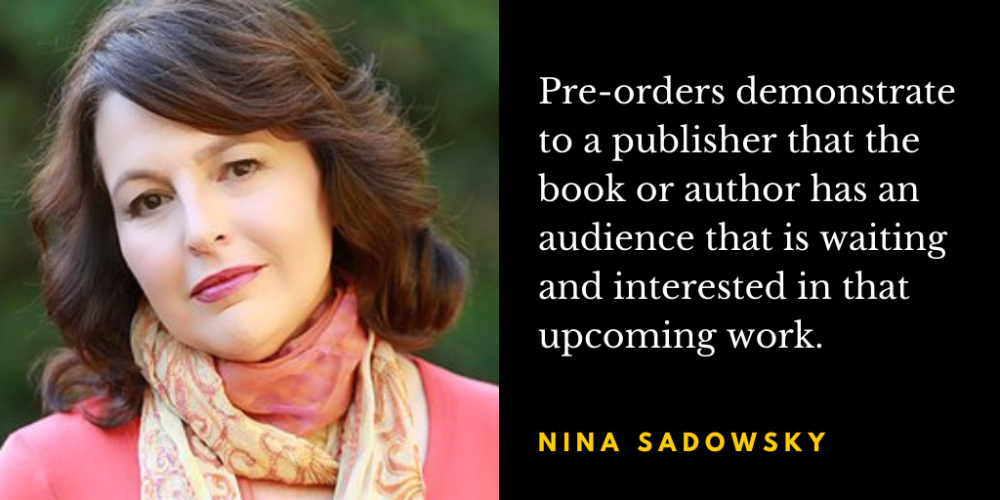 Nina R. Sadowsky (@sadowsky_nina) is a recovering entertainment lawyer who worked as a film and television producer and writer for most of her career. She has written numerous original screenplays and adaptations and done rewrites for such companies as The Walt Disney Company, Working Title Films, and Lifetime Television.

In March 2016, Ballantine released Nina’s first novel, Just Fall, a psychological thriller. Fast forward to January 28, 2020, when Sadowsky’s third thriller, The Empty Bed is about to come out. It’s the second in the Burial Society series. Recently, she answered questions via email about ways she is promoting her book to increase pre-orders.

She’s not the only one. Bestselling Author Lisa Scottoline recently let book buyers who pre-ordered choose a paperback from her backlist. Dana Kaye, founder of Kaye Publicity wrote in her current newsletter, “Pre-orders play a part in an author’s chance to be on bestseller lists. First-week sales are extremely important to media outlets such as the New York Times. An author’s pre-order sales count toward their first week’s sales, which can bump a title’s potential for a bestseller list ranking.”

Cathy Shouse: What is your most significant effort right now to boost your pre-orders?

Nina Sandowsky: Since my protagonist rescues whistleblowers, abused women and other vulnerable and desperate people on the page, I teamed up with the Violence Intervention Program, a Los Angeles organization that helps the most needy (featuring as it does everything from a fetal alcohol clinic to an LGBQT+ center to an elder abuse clinic) to do some good in real life. I will donate a portion of every pre-order to the organization when proof of purchase is sent to EmptyBedVIP@gmail.com.

Pre-orders are particularly important because they demonstrate to a publisher that the book or author has an audience that is waiting and interested in that upcoming work. That demonstrated interest of course affects the number of books ordered in an initial run, but also the marketing and publicity support the publisher brings to the work.

This perspective is largely anecdotal, as traditional publishers like mine can be very close-mouthed about both print runs and marketing expenditures, although my publisher has always welcomed my innovations toward generating pre-orders, supporting my efforts with social media support and book bundles.

Many authors will donate to a charity associated with the book, but you truly went all in with the Violence Intervention Program. Tell us more about that.

My Burial Society series is a form of wish fulfillment for me with my protagonist, Catherine, serving as my badass avatar. I go to marches and sign petitions. She takes action, sometimes morally questionable action, in her aid of the most vulnerable in our society. I wanted to take Catherine’s spirit out of the fiction realm and into reality, so I partnered with the Violence Intervention Program (VIP) and its LGBTQ clinic, the Alexis Project, for the release of The Empty Bed.

I have several connections to VIP: the first is that my dear friend, the extraordinary Robin Sax, is the project manager at the Alexis Project and has been integral in developing its mental health services.

The second connection is Alexis herself: Alexis Arquette starred in the first movie I produced, Jumpin’ at the Boneyard, and her sister Rosanna Arquette was featured in my second. When Alexis passed away in 2016, Rosanna partnered with VIP’s fearless leader, Dr. Astrid Heger, to create the Alexis Project.

Once I had the idea for the promotion, I contacted my friend Robin Sax, who arranged an introduction to Dr. Heger. I toured the VIP facilities so that I could speak firsthand about the amazing work they do. I spoke to Rosanna, who gave me a quote to be used for promotional purposes, and I conducted an exclusive interview with her which will be released as part of my first podcast series this month through my newsletter and on my website. I created social media promotional materials which were shared on my platforms and also by Ballantine/Random House and VIP. VIP also highlighted the promotion through their newsletter and Random House offered to sponsor a raffle for a book bundle in conjunction with the promotion.

I’ve heard that some organizations are wary of having their names promoted in this way and are reluctant to help authors publicize. They have expressed concerns about the book’s contents and/or its themes. Did you experience any of that, even initially?

VIP and the Alexis Project have been very welcoming of my support. I gave Rosanna, Dr. Heger and other key members of the team advance copies, but that was not required by the organization.

Have you received feedback? Has the response been different from what you expected and if so, how?

I’ve received a lot of supportive comments and no negative ones. One reaction that I’m a bit stumped about how to address is that people who have wanted to support VIP and the pre-order promotion have ordered the book, but haven’t taken the extra step of emailing their proof of purchase to EmptyBedVIP@gmail.com. And they should. Because when they do, they get a digital packet of rewards, featuring a “killer” book club guide with recipes, cocktails, invitations, and discussion questions, in addition to my making a donation to the work of VIP.

How will you weigh whether this latest initiative was successful?

My initial goal was to raise pots of money for VIP. We’ve got until January 28 and I’m promoting hard until the end. Even if I don’t succeed—whatever the outcome, I’m happy I’ve succeeded in making more people aware of the vital work done by the organization. In my writing, I am always trying to address issues of social justice, and so promoting an organization I care deeply about fired up my marketing drive.

What are some other methods you’ve used to encourage pre-orders and how have they worked?

I created swag items for both The Burial Society and The Empty Bed and distributed these to influencers, at conferences, and through giveaway promotions.

I’ve experimented a bit with the type of swag, trying to determine what provided the best bang for the buck. While I’ve created canvas tote bags, scented candles, luggage tags and notebooks that were all branded with cover art, the most successful choice was the lens cleaners that I ordered for The Empty Bed. Inexpensive to purchase and mail, and useful to everyone, these have been hugely popular. In fact, I expect to see many copycats at Thrillerfest next year, as that is where I debuted the lens cloths last July to a great reception from other authors!

Since market research tells us it takes 7 to 10 impressions to create awareness and then convert that awareness to a purchase, putting my branding on something that everyone uses daily seemed like a smart move.

Another promotion I tried was a short story contest, 500 words around the topic of “secrets.” The winner got books and swag from me and I enlisted my publisher to send a gift box of other books as an added bonus.

Again, I have no empirical data that tells me if the contest converted to sales, but it was great fun reading the entries! When I received the stories, I asked someone else to sort the entries into a file with the authors’ names concealed, as I was uncertain of the reach of the efforts I had put into publicizing the contest and was afraid I would know all of the writers. While I did end up knowing a few, most of the contestants were unknown to me, as was the first-prize winner. 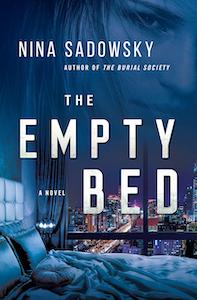 Since I believe that an author builds an audience one reader at a time, this kind of personal engagement with my growing fan base is an important part of my overall strategy. And my publisher has seconded this, emphasizing that a small, highly engaged fan base can work miracles in spreading the word about a book.

Is there anything you are thinking about doing differently next time around or do you know yet?

I’m still evaluating the success of this promotion, both for my pre-orders and for VIP. I’ll continue to be innovative about how to promote my books because I feel that it’s a necessity to do so. As I have another thriller coming out this summer, Convince Me, I’m sure I’ll be cooking up some fresh ideas pretty soon!

Cathy Shouse’s articles have appeared in Family Fun, The Saturday Evening Post and Indianapolis Monthly, as well as The Romance Writers of America national magazine (RWR Romance Writers Report). She writes contemporary romance and assists writers with promotion at every opportunity. Visit her website or find her on Twitter at @cathyshouse.