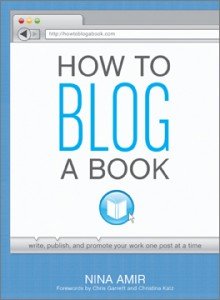 The following advice is excerpted from How to Blog a Book by Nina Amir, recently released from Writer’s Digest Books. Aside from describing in detail how to launch and maintain a blog to ultimately land a book deal, Amir’s book offers a range of valuable interviews with successful bloggers who succeeded in doing just that. Here are their insights into how long it took them to get readers, and what seemed to be a turning point in the life of their blog.

“It took about a year to develop a steady group of readers. It was very slow at first, but I found great joy in writing so I kept producing posts. One big tipping point for me was getting featured on venture capitalist and author Guy Kawasaki’s blog in May 2006. He was extremely influential in my target market. When he featured my post An Open Letter to CEOs Across the Corporate World on his blog, traffic and subscribers exploded. After that exposure, my growth was quicker and supported by influencers like Seth Godin, Kathy Sierra, and Hugh Macleod.”

“It took me about two years to build an audience. … Engaging social networks definitely helped. I opened groups on Flickr for people to share photos of their urban gardening and tomato adventures and honestly forgot about the group I’d set up. I was utterly surprised in checking my Flickr page a year later to find hundreds of people were submitting photos to my groups regularly. A similar occurrence happened after setting up my Facebook and Twitter pages as well. … We may all wish for a silver bullet to bolster readership, but it’s less a case of scoring a home run and more a case of getting singles on the board.”

Brett McKay, The Art of Manliness

“The site took off fairly quickly after I started it. The very first post I wrote, How to Shave Like Your Grandpa, got picked up on Digg and Reddit, which brought in a ton of traffic. (This was back when getting on the front page of Digg was a huge deal).”

“As soon as other writers started blogging about the help I provided them through my first book, Blockbuster Plots Pure & Simple, plot consultations, conferences, workshops, and retreats, my readership began growing. Writer’s blogs and websites bigger than mine, like The Daily Coyote, The Writers Store, and NaNoWriMo (National Novel Writing Month), started linking to my website and continue to send writers to the Plot Whisperer blog today. Writer’s Digest magazine awarded the Plot Whisperer blog the honor of a spot as one of the 101 Best Websites for Writers for three years running and directs new visitors to the blog each year.”

“It took about three weeks to go from 100 hits a day to 30,000 hits a day. From there it blew up to hundreds of thousands of hits. The day it exploded was the day it was featured on Comedy Central’s Insider. Truthfully, the traffic from major media outlets was nice, but sites like StumbleUpon always added more traffic than any traditional media source. So while big media can start the spark, it’s people sharing the posts over social media that causes a blog to really grow.”

Nina Amir is an Amazon bestselling author of such books as How to Blog a Book and The Author Training Manual. She is known as the Inspiration-to-Creation Coach because she helps writers and other creative people combine their passion and purpose so they move from idea to inspired action. This helps them positively and meaningfully impact the world—with their words or other creations.

Nina is an international speaker, award-winning journalist, and multi-site blogger as well as the founder of National Nonfiction Writing Month and the Nonfiction Writers’ University. She also is one of three hundred elite Certified High Performance Coaches working around the world.