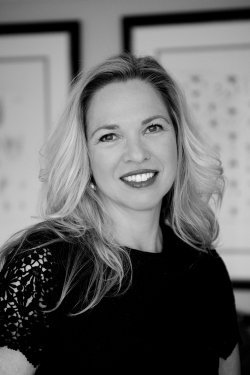 While I was a creative writing undergraduate, most of my writing classes were with two professors, and one of them is author Margaret McMullan. We’ve stayed in touch over the years, often seeing each other at AWP. A couple years ago, after her father passed away, she looked for collections of essays by women writing about their fathers. Unable to find any, she decided to put together her own, and reached out to me to contribute.

Fast forward to today: her anthology Every Father’s Daughter was just released by McPherson & Co. It’s received a starred review in Publishers Weekly, a favorable review in Kirkus and Foreword—and on May 23, a nationwide book event will take place in nine different cities simultaneously, when the contributors will connect via Skype to discuss their work. (Publishers Weekly covered the unique nature of this event.) I’ll be speaking and signing at New Dominion bookstore in Charlottesville.

In advance of the event, I asked Margaret if she’d answer some questions about the process of getting the anthology published, because I knew it wasn’t an easy road. At one point, she had asked me for advice on finding a publisher, but my leads didn’t pan out for her. Still, she didn’t give up.

Jane: Were you already aware of the publishing industry 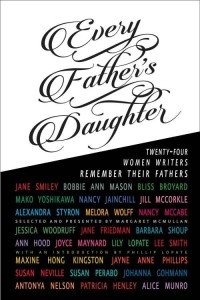 squeamishness around anthologies when you set out to create this anthology?

MM: I was not aware of the industry’s “issues” with anthologies, and I suppose I should have considered the market more before I set out on this particular writing project. That’s Writing 101, right? And it’s what I’m always telling students to do.

But this project felt so clearly right. I just had to do it, and I’ll admit, I became obsessed. I sent out queries to all the women writers I loved or whom my father had loved. I messaged them by email, Facebook, and handwritten letters. When I wrote to these women about the project, I asked them simply, “Tell me about your father.” I think with most of them, the assignment just clicked. They saw the heart and soul of this book from the start.

The turning point came when Alice Munro called and said, “Yes, of course you can reprint my essay.” I was just stunned that her publisher had forwarded my letter to her in Canada! Other writers followed. Lee Smith led to Jill McCorkle and so on. There was a snowball effect.

Jane Smiley was the last on board. I had the wrong email address for her, and I tried one last time. She said, “Give me the weekend,” then, on Monday, she sent her essay “No Regrets.”

I know you’ve worked with an agent for many years now. When you went to her with this project, did she try to sell it at all, or were you on your own from the beginning?

She attempted to get this project to several New York publishers such as Norton, but nobody saw any money in an anthology, which was bizarre to me. They said that anthologies had run their course and I thought, well, when did that happen?

At one point, my agent asked me if maybe there was a better way to honor my father. There are, in fact, many ways to honor my father, but this book was the best way, and besides, this was no longer just about my father anymore. There were all these great writers who had written new work for this collection. I really felt I had a responsibility to them and to see this collection through to publication.

During your search for a publisher, when you and I discussed this project, you’d already been through a few near acceptances. You demonstrated such resolve to find a publisher for this book, when most people I know would’ve been crushed and stopped submitting. Was your attitude “It’s just a matter of time before I find the right home?” Or were you close to giving up?

This collection was with three different university presses. The first went out of business, another said they couldn’t afford it, and the last went through a “reorganization.” Each university press editor or editorial board wanted to make the collection specific to their region—all Midwest authors for instance, or all Southern because that was their market. Makes sense.

All of the presses were concerned that this collection was too “mass market.” This fear did not make sense to me. Why not have a successful book for all to read? None of these presses planned to pay the authors. The vibe I got was that we should all feel privileged to be with a university press.

I approached several mid-sized presses. The editors talked more openly about money and marketing. There was also one person making the decision to publish or not. There were no committees or board members to answer to.

The book’s original working title was Our Fathers. Joyce Maynard suggested I change it to something less religious sounding. After Bruce McPherson of McPherson & Company took the manuscript, he came up with the title Every Father’s Daughter.

The university presses put me through a lot of hoops, and I worked so closely with the editors, I was pretty devastated when all the plans fell through. I “took to bed”—not for a day or a week as some of my Southern great aunts have been known to do, but for a few hours at least. I felt so sorry for myself. It was pathetic. And then I just got good and mad. I always tell my students how anger is helpful because it can propel you to action. Self-pity is worthless. I got out of bed and went back to search for the right publisher.

How did you end up reaching out to McPherson & Co.?

When I went back to the drawing board, I searched the internet for the umpteenth time. I came across an article about midsize presses, and, in the comments section, I saw that someone had written, “Don’t forget about McPherson & Co.”

I looked up McPherson & Co. and found a Wall Street Journal article. McPherson had published Jaimy Gordon’s novel Lord of Misrule, which won the National Book Award, and the article was about how a small press deals with that kind of sudden recognition. The publisher, Bruce McPherson, also talked about everything he did to get that book published and to get it to readers. This was clearly a publisher who adored everything about books and publishing. He loved the process.

You always have a feeling, you know? I had a feeling then that this one was going to work out.

The following week, three other presses got back to me with offers, but the best one by far was McPherson & Company. It was a perfect fit.

Find out more about Every Father’s Daughter—available in hardcover only.