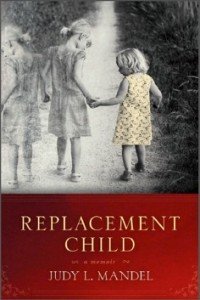 Today’s guest post is by Judy L. Mandel, author of the Replacement Child, forthcoming from Seal Press in March 2013. I asked her to tell the story of self-publishing her memoir, which ultimately led to a traditional book deal from Seal.

But it was not luck that I attended many writers conferences prior to self-publishing, to figure out my best course of action. Those conferences offered valuable information about sending out queries, writing proposals, and approaching agents. I knew I wanted an agent and a traditional publisher, but I also knew that as an unknown memoirist, it would be a tough road. I gave myself a year to query, send out chapters when requested, and do my best to procure an agent for my book. I wasn’t getting any younger.

When that year was over, I had requests for partials and the entire manuscript from 50 agents. My query was working. About half of them showed interest in the book, but were wary of taking it on in the market at the time in 2008. Not a great year for any beginning endeavor. At that point I started looking at self-publishing and decided to form my own imprint to publish my book. I had been in marketing for twenty years and knew how to manage any creative project—although, looking back, I didn’t know exactly all of what I was taking on. I hired an editor, a designer and an online marketer to start.

I did a great deal of marketing for Replacement Child in 2009 and 2010 when I first self-published the book. I went on a nationwide book tour at my own expense, visiting bookstores that would have me in towns where I had friends or family to put me up. It was a great adventure and a chance to see people I normally don’t get to visit. Some of the stops were great, where I was able to get some advance publicity. And some were terrible where only one person showed up for a reading. C’est la vie.

The online blogging community was very receptive, and I am very grateful to them for their support with reviews and guest blogs. Review copies were sent out to blog reviewers before the book was released, to bloggers that had reviewed memoirs in the past.

Local media was receptive, and I had articles in my local papers in my town in Connecticut, and did readings at local libraries. I had several radio interviews, both for blog radio and traditional stations. I joined organizations and took advantage of opportunities to speak and do readings whenever possible. Replacement Child also garnered several awards for self-published books, including a National Indie Excellence Award and a Writer’s Digest award.

By the summer of 2011, I had sold about 2,000 print books and a few hundred e-books on Amazon. It’s very hard to say which marketing tactic worked best, but all combined produced this modest success. I decided to list the e-book on the Barnes & Noble site in July and was encouraged to see that they had picked it for a featured book of the month. I credit that pick for bringing more awareness to the book.

Just after I listed the e-book for that last shot, I wound up in the hospital. My book was the furthest thing from my mind that fall, knowing I had to go back for surgery in a few months. It was Christmas when I noticed some weird deposits in my bank account online. Again, I absolutely forgot that I had arranged direct deposit for the e-book sales. It turned out I was selling around 4,000 e-books a month.

That’s when I contacted Rita Rosenkranz and we talked about whether it made sense to approach a publisher. I was grateful for her wise counsel that helped me think through the decision. In the end, I believed there was still a measure of credibility in having a traditional publisher. Reviews come more easily and you are taken more seriously. That is changing, but I believe it is still widely the case. After considering the pros and cons, I told her I would like to try. She sold it very quickly to Seal Press.

It’s been quite a ride so far, and I am excited for the book to be released in March. You can find more information about Replacement Child at replacementchild.com.

Judy L. Mandel began her career as a journalist, branched out to public relations, and settled in corporate marketing, where she worked for more than 20 years as a marketing director for several Fortune 100 companies. Mandel is now a student in the MFA program of Stony Brook Southampton and lives in Connecticut with her husband. Visit her online at JudyMandel.com.