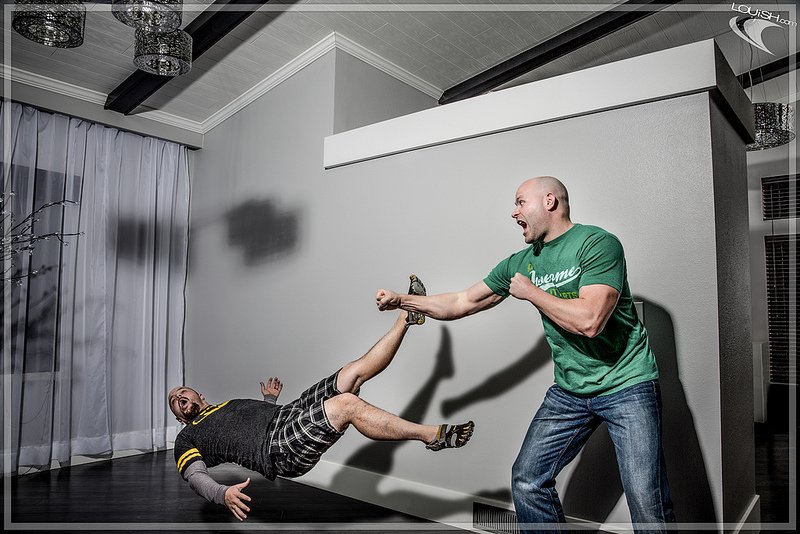 Today’s guest post is by Fred Johnson (@fredbobjohn), an editor with Standout Books.

For new writers, throwing in a few combat scenes can seem like an easy way to add some excitement to a novel, but the reality is that violence can be incredibly difficult to pull off effectively.

There are many pitfalls writers will fall into when writing about violence—I want to talk about what they are and how you can avoid them. In their places, I’ve offered up two main alternative methods that I think work for ninety percent of combat scenes.

If you’re writing a fight or battle scene in genre fiction, detailed description will be the way to go nine times out of ten. This is because a fight scene of any scale and duration is likely to involve two or more people tied up in an incredibly fast-paced and complex process. Detailed description serves to guide the reader through the confusion and helps your readers suspend their disbelief.

Some of the worst combat scenes I’ve ever edited have read along the lines of:

“Bob disarmed the guard and killed the seven men behind him.”

What? How did he do that? He’s a single guy against eight assailants! Did he click his fingers and they all dropped dead?

Don’t be like the author of Bob’s brief fight—you need to make your readers believe it’s possible that your James Bond-esque hero shot his way through two hundred trained henchmen, despite what their brains are telling them.

Combat needs to be specific and it needs to be rooted in concrete actions. This is doubly true if it’s a case of an underdog protagonist surmounting impossible numbers—after all, for the reader to stay immersed in your book’s story, they need to be able to believe the story’s events. If those events are too preposterous, that’s it—you’ve lost your readers.

When the death blow came it was so sudden that many in the crowd missed it. Agasarsis lunged. Skilgannon met the attack, blocking the lunge and rolling his blade round the sabre of Agasarsis. The two men leapt back. Blood suddenly gushed from Agasarsis’s severed jugular. The champion tried to steady himself, but his legs gave way, and he fell to his knees before his killer. Servaj realized that, even as he parried, Skilgannon had flicked the point of his sabre across the throat of his opponent.

Every movement and detail is picked apart here, slowed down, and recounted by a third-party spectator. The result is a climactic and vivid end to an important encounter.

It’s for the same reason that action movies favor slow-motion effects and sharp editing—the incredibly complex and unlikely actions presented need to be slowed down and examined to be believed. Imagine if, in The Matrix, Neo and Trinity simply arrived to rescue Morpheus and told him “Oh yes, we killed those fifty guardsmen downstairs. No sweat.” No—we need to see it to believe it. And this is much the same for books.

The alternative method to writing good violence only works in certain situations, and is favored in literary fiction and detective novels. The method operates around what is left unsaid; consider Myrtle’s death in F. Scott Fitzgerald’s enormously popular novel The Great Gatsby:

A moment later she rushed out into the dusk, waving her hands and shouting—before he could move from his door the business was over.

The “death car” as the newspapers called it, didn’t stop; it came out of the gathering darkness, wavered tragically for a moment, and then disappeared around the next bend.

The precise moment of Myrtle’s death is lost here—we don’t see the impact or hear the scream, and yet we know with terrible certainty that Myrtle is dead. This kind of quiet violence gains power through how understated it is, and is totally reliant upon the power of context. When attempting an implied moment of violence yourself, your prose has to boil over. You’ll want short, punchy sentences and resonant concrete images. For example, this fight between two antagonists is from a fantasy novel I edited recently:

The final blow struck Samson hard in the chest. He reeled back, his knees trembling like aspens before giving way beneath him. The hooded woman watched him fall, saw his eyes widen. Slowly, she drew the long dirk from her boot and ran her finger along its edge. “You’re in for a long night,” she said softly.

It’s the equivalent of when, in a movie, the door swings closed on the man bound to the chair in the mafia den. The scene cuts off, and although we don’t see anything, we all know bad things are happening.

So there we have it. Now, reducing good violence down to two alternative rules might seem rather limiting–I have, after all, suggested either spelling everything out in candid, straightforward language or giving the reader just enough so that she/he can work out what’s going to happen. It could be said that I haven’t left much room for any middle ground.

But, of course, great writers will always find ways to flout these rules and guidelines, so don’t feel like you have to limit yourself–writing is an art, not an exact science, and there’s always room for experimentation. That said, to break the rules, you have to first be aware of them.

Now get out there and give your characters the violent triumphs they deserve.

Fred Johnson is an editor for Standout Books, where he helps authors take their manuscripts from good to perfect. He also writes fiction and poetry, and can be found on Twitter at @FredBobJohn.