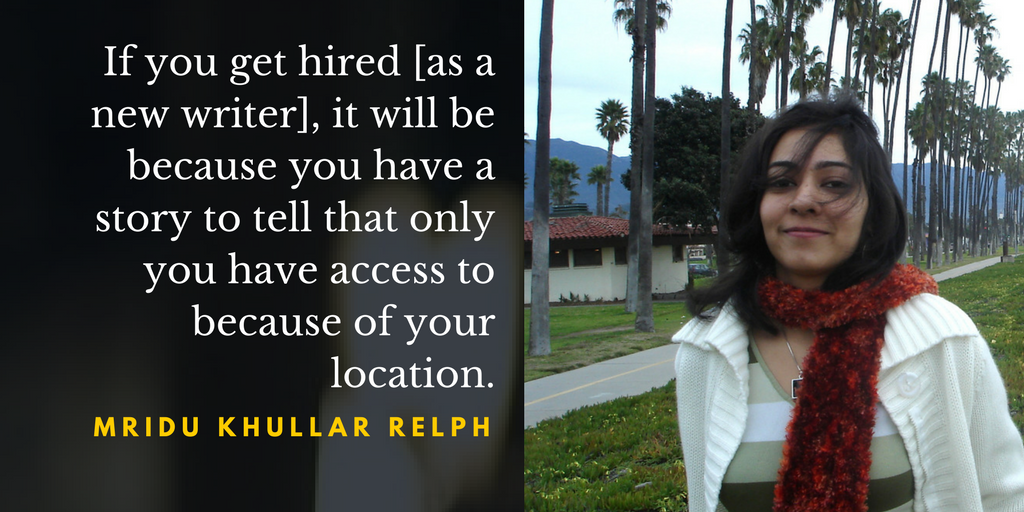 If you dream of a full-time freelance writing career—but have felt discouraged by the largely negative messages about how difficult it is out there (many of which come from freelancers themselves), then allow me to introduce you to Mridu Khullar Relph of The International Freelancer.

Last week, she released a list of 70+ publications that pay $1 a word or more (or a $500+ flat rate). She put together this list in defiance of everyone who says it’s “impossible” to make a living as a freelance writer and to provide a helpful resource to the wider community of freelance journalists and writers who are looking for ways to earn more.

Mridu was a successful freelance journalist for twelve years before starting The International Freelancer. She built her career from New Delhi, India, writing for top US and UK publications, including The New York Times, TIME magazine, The Independent, CNN, Forbes, ABC News, The Christian Science Monitor, GlobalPost, and more. She’s won several awards for her journalism, including being named Development Journalist of the Year in 2010 by the Developing Asia Journalism Awards for her work on wastepicker women in India. She is currently based out of London.

Mridu was kind enough to answer my questions about the freelance life.

Jane: One of the complaints I hear from freelancers is that online writing doesn’t pay. That isn’t true in my experience, although I can understand why that belief is widespread, especially when good online publications fold (e.g., The Toast) for lack of funds. Can you comment on the types of online writing that can and do pay, versus those that don’t?

Mridu: In my experience, whether a publication will pay well (or at all) will come down to how it’s funded. While I love the startup and issue-based feel of many online publications, they are typically run by people passionate about a topic and who have access to limited funds. So they grow organically and often take time to become high-paying markets, if at all. That’s important to remember.

In terms of the kind of writing, I think it often comes down to supply and demand. Right now, personal essays are everywhere and writers love writing them. The appetite for them seems almost endless, but perhaps for that reason personal essays, unless they’re going in the back pages of national magazines, aren’t incredibly high paying.

I do find that original reporting is almost always going to be something that’s valued and we’ve seen that shift recently in the minds of consumers. Online publications such as Ensia, which I’ve written for, will often pay for well-reported, well-researched stories, for instance. (We forgot to add them to our list, but they too pay approx. $1 a word.)

Specializing in a subject or region can also be helpful. I routinely negotiated double the initial pay I was offered simply because I was a journalist in India working for US and UK publications and translating East to West was something I did well for my clients and I was often one of the handful of people doing it.

When considering the practice of professional full-time freelancers, how much time would you say is spent working on pitches (and researching pitches or publications) versus the actual writing and revising? As one becomes more established, do you think less time is spent on pitching and researching publications (because you have relationships in place)?

Definitely. When I first started, I was spending almost 80-90% of my time pitching. I didn’t have any work and I wasn’t writing the best pitches, so I was sending out five pitches a day as a matter of practice. (I talk about that here.)

I’m now more focused on books but in 2014, which is the last year I was making my entire income from freelancing, I would have pitched less than 20% of the time. This was partly because of relationships with editors but it was also because I had introduced content marketing into my business and I was getting a lot more regular and high-paying assignments from those clients. (More on that here.)

I think that’s key to talk about, too. Diversification is something freelancers should look at. This list we’ve published is all about $1-a-word publications and as someone who is incredibly passionate about telling stories from the developing world, I have found that news magazines, online markets, and consumer publications have been a fantastic source for feeding that passion. But I’ll also add that I have been able to use my journalism experience to break into the content marketing field and the top agencies and markets in that field continue to pay $1 per word or $200-300 per hour to writers who can demonstrate expertise and experience in specific industries. I’ve worked with nonprofits, national governments, and big organizations working in the fields of agriculture and solar technology and been paid incredibly well for that work.

You have a good number of A-list magazines on your list of 70 publications that pay $1 a word—such as New York Times magazine, Oprah, The Atlantic, and so on. Most writers are pretty intimidated even thinking about pitching these publications. While obviously you’d want to do your research before pitching, and approach such magazines with only your best ideas, what else can a writer do to be taken seriously by such publications, especially early in their career?

I feel like it might be a mistake to categorize markets as deserving of higher or lower quality pitches based on what they pay. By that I mean that I’m a big advocate of making sure you do your research before pitching and approach ANY magazine with your best ideas, even the local ones, even the ones that don’t pay as much. Always be willing to put your best work out there and not skimp on any part of that effort because when you do your best with absolutely every pitch and every assignment, you’re adding to your learning and your clips.

Once that’s done, I advocate to my students that they stop overthinking the whole thing and simply start getting their work out there. Do not be intimidated! Many of my students have started off getting paid $500 or $1 a word for their first, second, or third assignments. It happens more frequently than you think.

And here’s the way I think you’re going to be able to do that as a new writer: Come up with ideas editors can’t say no to. Unique ideas that they don’t have access to. If you’re a writer in Ohio, is there a new trend or farming technique that you might be able to report on that has national relevance? That an editor in New York may not have heard about, for instance? Could it work as a pitch for an agricultural magazine? If it’s a big enough trend and growing, could it work for a news publication? When you send that pitch, you won’t get hired because of your credits. If you get hired, it will be because you have a story to tell that only you have access to because of your location.

That’s just one example. You could use access to a difficult-to-find source (something I have done) or access to a celebrity who doesn’t give interviews often. You might have technical knowledge about a subject that most writers don’t.

The way to break into top publications as a new writer is to give them something unique, something no one but you can offer.

What do you wish you had known about making freelance writing pay when you started out? Or what lesson was the hardest to learn?

I wish I hadn’t listened to all the experts and the advice about starting with local publications and the “realistic” advice about freelancing not being a viable career. I was told I couldn’t do it from India. I was told it was impossible to make a decent living with it. I was told you could chase the awards or the money but not both. I was told that if you wrote stories about social issues, you wouldn’t get paid for that work. (My highest-paying assignments have been about human rights issues.)

The hardest thing for me, personally, was learning to trust my gut and to allow myself to follow my own path, even if that meant that I had falls along the way. Because now I am proof that it doesn’t have to be love or money. For me, it is both.

If you have any freelance aspirations at all, be sure to visit The International Freelancer.