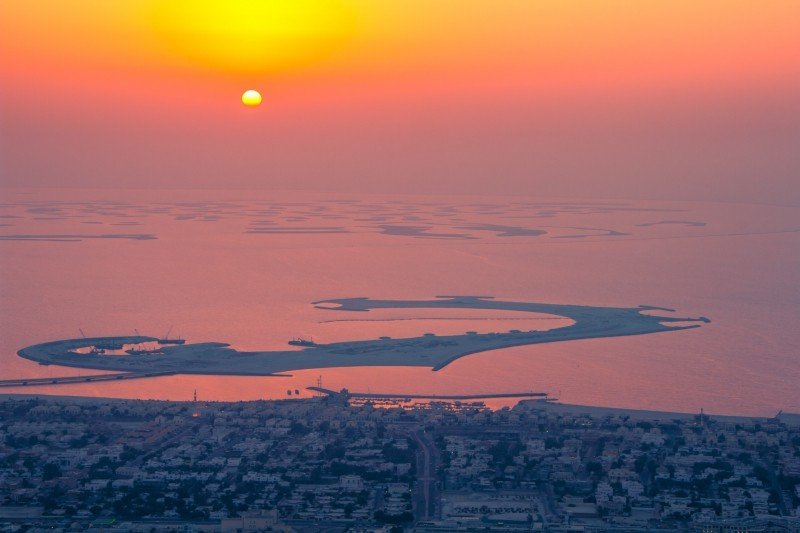 I left the island of Jumana under a cloud, deported for an undisclosed crime. As my daughter and I boarded the plane, I turned for a last glimpse of palm trees backlit by the setting sun and a pale horizon of sand framed by a turquoise sea. My hand trembled as I gripped the railing to steady myself.

“Go ahead, Sunny,” I said with a gentle nudge. She stepped into the plane.

I followed, bumping my wheelie suitcase up the last metal tread. Arab and Asian families and businessmen with attaché cases blocked the aisle, but moved ahead all at once. I put our bags in the overhead compartment. We took our seats, and Sunny huddled against me.

As we buckled our seatbelts, a voice in my head kept repeating why? why? I shifted in my cramped economy class seat that was ill-suited for a six-foot-tall woman with long legs.

At least the flight to Dubai would be brief, since Jumana was only thirty kilometers off the south coast of the Arabian Gulf. It was a flight we had taken many times on excursions to Dubai, but this trip was different. My thoughts kept circling around the same obsessive orbit. Caught in the whirl of my mind, details and fragments of things churned like a sand devil spinning across the desert. I leaned over to squeeze Sunny’s hand. “Don’t worry. It’s going to work out.”

“I know, Mom.” She peered at the photo she was clutching of our dog. A friend was taking care of him. Her face clenched up, but she didn’t cry. “When can he come to Dubai?”

“Once we find a place to live, someone will bring him here on the ferry. I promise.”

Sunny nodded, but anguish flickered in her eyes. She was being brave for my sake. What could I say to my ten-year-old daughter, who’d had to pull up stakes abruptly, leaving her friends, her school, and her beloved dog?

I had been given forty-eight hours’ notice to leave the country. No reason why. No explanation why the Women’s College of Jumana University fired me after seven years of teaching. It was a mistake. It had to be. What could I have done to warrant being branded persona non grata and thrown out of the country like a piece of trash?

“The writer’s task isn’t to answer the question, but to frame it correctly.”  —Chekhov

Sometimes everything we need for our openings is there, more than we need, in fact. It’s just a matter of cutting and rearranging.

This opening is of a novel about the experiences of an expatriate professor at a fictional woman’s college located on the island of “Jumana” (a feminine Arabian name meaning “silver pearl”) in the Persian Gulf thirty kilometers from the city of Dubai.

The first page finds the narrator/protagonist boarding a passenger plane with her ten-year-old daughter, having been fired from her job and deported without explanation, raising in readers the same questions the protagonist asks herself, namely, Why are we being deported? What did I do? From here the novel is bound to go back in time to tell us this woman’s story.

The strategy being used here is called a framing device or a framed narrative. What it “frames” or sets up is a long flashback—in this case presumably the length of a novel—one that will answer, or at least partly answer, the question[s] it raises.

The author launches her first page not with an experience, but with information: “I left the island of Jumana under a cloud, deported for an undisclosed crime.” The drawback to this approach is that the information provided answers a question that hasn’t yet been raised in the reader. We read this first sentence with no awareness that the protagonist is boarding a plane, let alone where she’s going, or that she’s been forced to leave against her will. Only halfway down the first page, when the narrator tells her daughter, “Don’t worry. It’s going to work out,” are we given cause to wonder what circumstances have prompted this involuntary voyage.

By answering up front the very question that the scene exists to arouse in us, the author subverts her own purpose. This is not the same as withholding information or creating what I call false suspense. It’s simply a matter of giving readers the experiences before supplying information that explains or categorizes them, rather than afterward.

Otherwise the scene makes too much ado of boarding the plane, of rolling and stowing luggage—mundane actions with which most readers are familiar and that don’t require dramatization. The sooner we get to “Don’t worry, it’s going to work out,” the better.

Here’s my edit, with the crucial dialogue engaged within a few lines. What’s been cut is implied or can wait (we needn’t know, yet, that the narrator has lost her job at “The Women’s College of Jumana”). In the original opening, the beloved dog’s name is withheld, why I don’t know. I have included it, since withholding it from us seems artificial and adds a note of false suspense.

“Go ahead, Sunny,” I said, nudging my daughter past Arab and Asian families and businessmen with briefcases. We took our economy-class seats (mine ill-suited for a six-foot-tall woman) and fastened our seatbelts. Sonny huddled close. I squeezed her hand.

We had left under a cloud, deported for reasons undisclosed. Through the puddle jumper’s window I caught a glimpse of palm trees backlit by the setting sun and a horizon of pale sand framed by a turquoise sea. My hand trembled. At least the flight would be brief, Jumana being only about thirty kilometers from the coast. It was a flight we’d taken many times.

“When can he come to Dubai with us?”

We’d been given forty-eight hours to leave. No explanation. After seven years. It was a mistake. It had to be. What could I have done? And what could I tell my ten-year-old daughter, who’d had to pull up stakes abruptly, leaving her friends, her school, even her beloved dog?

“Once we find a place to live, [name of person taking care of dog] will bring him to us. I promise.”

Sunny’s face clenched. Anguish flickered in her eyes, but she didn’t cry.

This version raises and answers the same pertinent questions, in that order.