For the past year or so, I have been hearing about the effectiveness of Facebook ads around the social media water cooler. As an author with three novels published and a new one scheduled to be released next year, I try to get the word out about my work as much as possible.

I’ve tried Amazon ads and Google ads with very limited success (neither one paid out, but they increased awareness of my books—I hope). The conventional wisdom in book publishing is that ads aren’t an effective way to increase sales unless the author is mega-successful already, and my experience with Amazon and Google advertising seemed to confirm that.

However, I couldn’t ignore the many people I respected who seemed to think Facebook ads were worthwhile. And I told myself that perhaps the Facebook platform was more controlled, and possibly more targeted, than Google. So I took the plunge.

Wow. What a roller coaster ride. I went from thinking This is the greatest piece of promotion I’ve ever done to thinking I might as well have burned that fifty dollars in my backyard Weber.

It wasn’t all bad, because I figured out where I went wrong after a few days and adjusted my ad settings. But if it weren’t for my husband, who works in the advertising industry, I probably never would have figured it out. 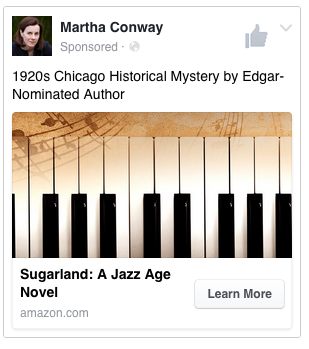 To start with, I’ll go through how I set up my ad campaign—an ad for my latest novel, Sugarland. After that I’ll pinpoint where I went wrong, so others can avoid the same mistake.

Facebook is pretty good at walking newbies through the process of setting up an ad campaign. Once I selected “Create Ad,” I was immediately taken to a page that asked, “What’s Your Marketing Objective?” I chose “Send people to your website” (i.e., the Sugarland page on Amazon).

Then I created a custom audience, trying to make it as specific as possible, which I had read was good practice. I targeted an audience who was in and around the Chicago area, as my novel takes place in Chicago, 1921. I limited it to women (who generally buy more novels, especially historical novels); I set the age from early twenties and up; and I targeted those with interest in mysteries, literature, fiction, jazz music, reading ebooks, and a few other interests and behaviors.

I also set my daily budget and set a schedule for seven days.

So far, so good. But there was one more step in the Facebook campaign specs process: to choose my ad’s “Placement.” Here is where things went seriously wrong.

As you can see by this graphic—a screenshot of the “Ad Set” page where you set your preferences—Facebook really encourages you to select the “Automatic Placements” choice. 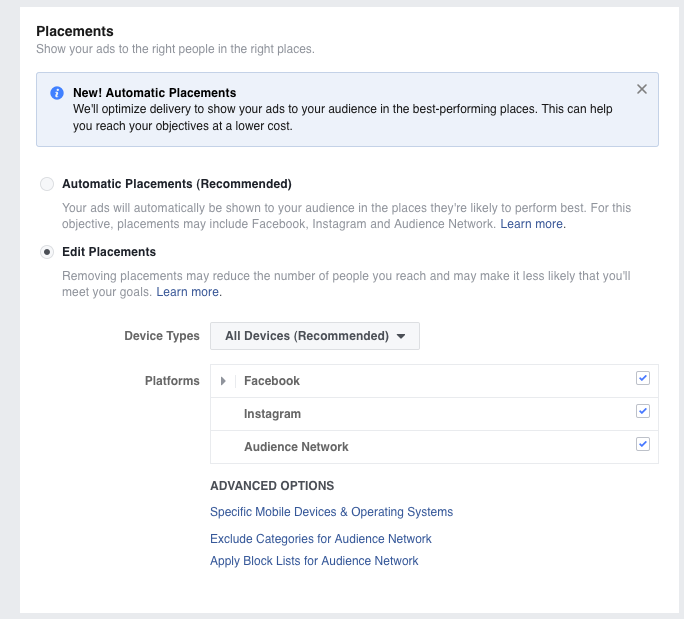 Not only is it specifically recommended, but there is also a kind of advertisement for it right in the category box (“New! Automatic Placements”). The description sounds good: “Your ads will automatically be shown to your audience in the places they’re likely to perform best” and “We’ll optimize delivery to show your ads to your audience in the best-performing places.” So I selected that option.

It turned out that this was the wrong move, but more on that later.

On the next screen I uploaded an image for the ad, wrote the headline and a few words of text, and I was good to go.

The first day and a half was exhilarating. Almost immediately I was getting a far greater number of clicks (users who clicked on my ad and were taken to the Amazon book purchase page) than I believed possible. The ad went live late on the evening of September 5, and on September 6, the first full day of advertising, I received 166 clicks in one day. To give you some context, most of my Amazon or Google ads received only about 100 clicks over the course of one week.

Not only was the number of actual clicks enormous, but the click-through rate (i.e., clicks divided by impressions) was 5.34 percent, whereas my ads on Amazon or Google typically had click-through rates of 0.46 percent. Here the Facebook click-through rate was over ten times higher—to industry experts this would be a red flag, but I just thought it was great.

Checking my Kindle sales page for that day, however, I saw that, for all those clicks, I had sold only two books. Not great, but the ad campaign had just begun.

On September 7 my ad received 157 clicks, and on September 8 it got 172 clicks. Of course, each of those clicks cost me money (approximately $0.12 per click), but hopefully they resulted in some sales. If these ads performed as well as Amazon ads (and Amazon is able to calculate approximate sales their ad campaigns generate), I would expect at least five book sales each day.

But I didn’t get that. Nothing like it. Although in August Sugarland had been selling something like two or three books per day, by some fluke of circumstances there were zero sales on September 7 and September 8. Not a one.

I had been crowing to my husband about all the clicks I had been getting (500 by the end of day three!), and at first I rationalized the lack of sales—they just hadn’t shown up yet on my sales page for some reason. But by the end of day three I admitted that, as remarkable as all this activity was, it hadn’t resulted in any real purchases. My husband and I took a look at my “Ad Management” page on Facebook, and after some digging he figured out that most of my ads, and the resulting clicks, were showing up on something called “Audience Network.” Neither one of us knew what that meant.

To make a long story short, as we dug further, we realized that Facebook was showing my ad primarily on mobile devices. According to my husband, mobile devices have a much higher click rate while not delivering equally high purchase rates. There are a lot of guesses as to why. One possibility is that because of mobile devices’ small spaces, fingers slip and click when they don’t mean to. (I’ve certainly done that.)

But the other possibility is a bit more ominous. Some games on mobile devices use something called “incentivized ads.” An incentivized ad is when a user has an incentive to click on an ad because in doing so they will get something in the game they are playing—a cloak that allows a character to fly, a weapon, a cool piece of armor.

Incentivized ads are generally frowned upon by companies such as Facebook, and they most likely have a policy against them, but apparently these kinds of ads are hard to trace back. Most companies, Facebook included, will sell my ad to another party who will place it on some platform; or the second party might even sell it a third time to someone else. When my ad is finally placed on a device where a user can see it, it may be a long way from where I initially set it up.

And here I was thinking that my ad would only be seen on Facebook pages! Not so. My ad could be placed anywhere, on any device, on any page, where a pair of human eyes might see it. That is, unless I specify Facebook as the only platform used for my ad.

After we figured this out, I changed my settings in the “Ad Management” page to exclude mobile devices and specify only Facebook.  Remember the “Automatic Placements” that Facebook recommends you select? Don’t select it! Here is what you do instead: 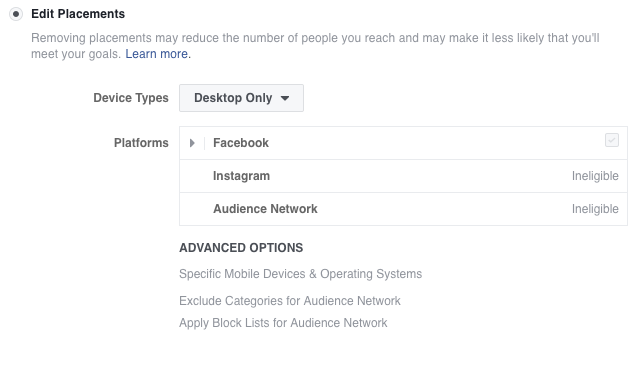 As you are setting up your ad specs, go to the “Ad Placement” selection. Under devices, choose “Desktop Only,” which renders the Instagram and “Audience Network” platforms ineligible. Alternatively, you could stay with “All Devices,” but then unselect “Audience Network.” 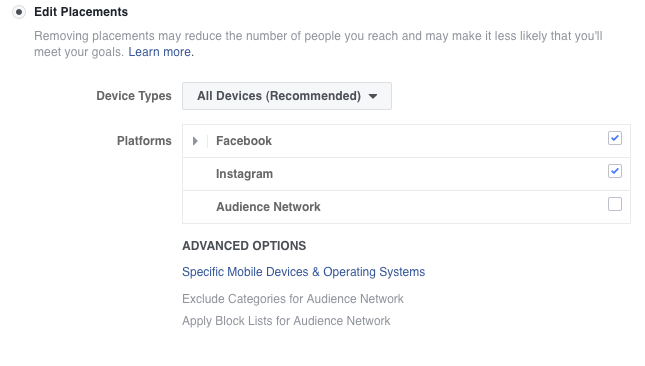 Once I did this, the click rate aligned with Amazon and Google ad click rates—about twenty clicks per day. Although I sold a book or two, the end results were not discernibly better than my Google or Amazon ads. However, the education was invaluable. 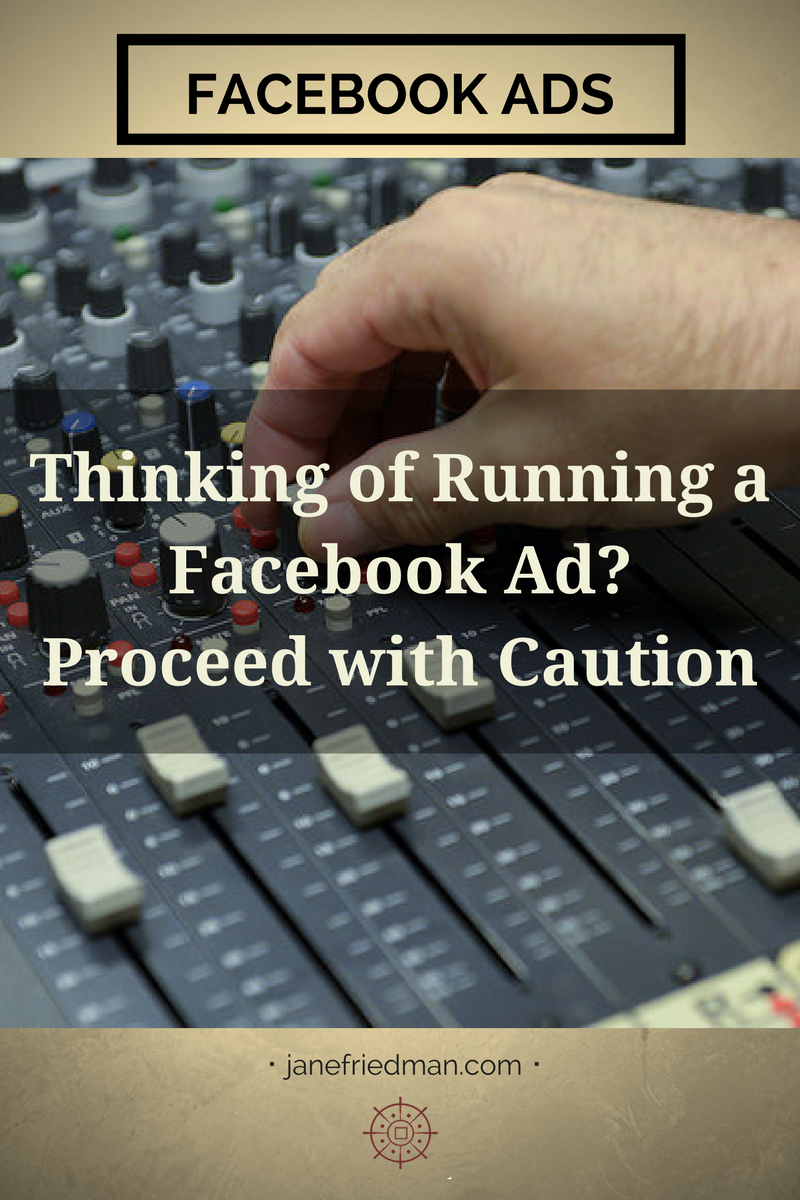 Martha Conway is the author of The Underground River, which was a New York Times Editor’s Book Choice, and features a neurodivergent character as the protagonist. She teaches creative writing for Stanford University’s Continuing Studies Program.