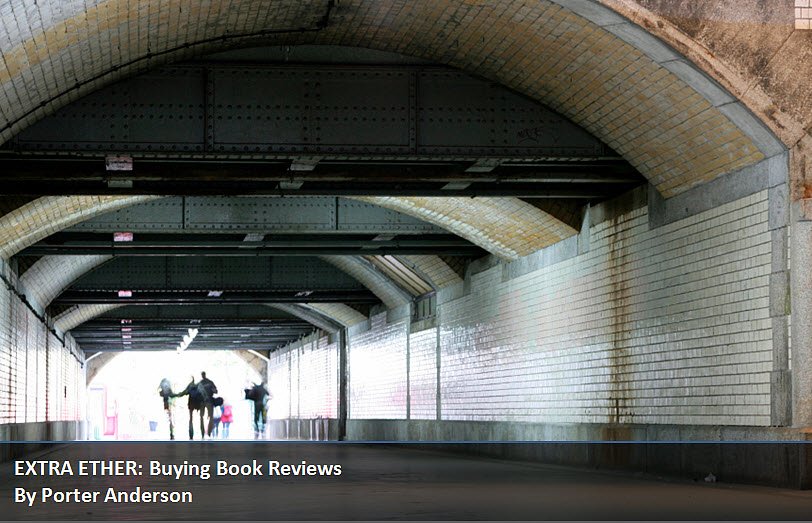 Potential reviewers were told that if they felt they could not give a book a five-star review, they should say so and would still be paid half their fee…As you might guess, this hardly ever happened.

The story, The Best Book Reviews Money Can Buy, describes what Nate Hoffelder at The Digital Reader is calling The Next Great Promotional Tool for Self-Published Authors. Writes Hoffelder:

If you’re a self-published author who is still struggling to get noticed, now might be the time to swallow the rest of your pride, jettison your code of ethics, and start buying reviews. (Hey, everyone is doing it.)

The part of Streitfeld’s article that grabs Hoffelder’s attention is the revelation that the self-publishing icon John Locke used Rutherford’s service to generate false reviews for his books.

One thing that made a difference is not mentioned in (John Locke’s book) “How I Sold One Million E-Books.” …Mr. Locke commissioned Mr. Rutherford to order reviews for him, becoming one of the fledging service’s best customers. “I will start with 50 (reviews) for $1,000, and if it works and if you feel you have enough readers available, I would be glad to order many more,” he wrote in an Oct. 13 (2010) e-mail to Mr. Rutherford. “I’m ready to roll.”

Mr. Locke was secure enough in his talents to say that he did not care what the reviews said. “If someone doesn’t like my book,” he instructed, “they should feel free to say so.”

He also asked that the reviewers make their book purchases directly from Amazon, which would then show up as an “Amazon verified purchase” and increase the review’s credibility.

Oh, John Locke, you tricky little man! So not only did you pay for positive reviews, but you paid for people to buy your books! That’s both dishonest, and a bit desperate seeming. Granted, you’re still a millionaire, and I’m sitting in a library trying to convince freshman to take translation classes, but well, I have my dignity.

Locke confirms his participation in all this to Streitfeld — 300 bought reviews before Rutherford’s fake-review operation was exposed by another author-client who didn’t like what she got for her money.

The coverage has set off what one wise observer terms a kerfuffle, potentially pivotal but also relatively contained: we cannot be all that surprised.

As a publishing contact in New York says to me, Amazon is, really, “the only game that counts big-time for self-publishers.” As far as distribution channels go, Seattle is the mountaintop.

On Amazon John Locke gets it in the neck for paid reviews http://t.co/v6SbSn5b

Traditional-publishing consultant Mike Shatzkin in his new post, Things to think about as the digital book revolution gains global steam, positions Amazon as the key engine of the digital dynamic. He’s not writing about the review-buying scandal, but about the contours of a profoundly upended business:

With all due respect to everybody else, the primary driver of this change (print to screen) has been the efforts of Amazon.com. They made the online selling of print books work in the US and then provided the critical catalyst — the Kindle — to make ebooks happen. Other players — Barnes & Noble and Kobo with their devices and the publishers with their sales policies — have crafted their strategies primarily in response to Amazon. They are participants building out a market that Amazon first proved existed.

Incensed about this new “thing to think about as the ebook revolution gains global steam,” Edward Tenner is at The Atlantic, reacting to Streitfeld’s stark revelation of a review-buying and -selling.

In Will Paid Reviews Bite Amazon Back? Tenner writes:

Amazon has a dilemma. So far the system has been working, but what happens when players out themselves? Even last year, detractors were calling it Spamazon. Could there be a tipping point of credibility?

This drops us quickly into one of those bottomless rabbit holes we see open up from time to time as a feature of the “freedom” of technology.

The “democratizing” of content on the Internet, as it’s touted by some, suddenly looks less attractive when users realize they’re the victims of ruthless, orchestrated, profiteering liars.

Amazon’s model relies on reader judgment as a substitute for the traditionally vigorous competition among publishers, writers, retailers, and critics. Of course there is favoritism and bias in that system, but also lively rivalry, in which best-sellers from Gone with the Wind to Harry Potter and the Philosopher’s Stone have ultimately been recognized after multiple rejections. Paid choruses of praise like Mr. Rutherford’s make the established system, flawed though it often is, appear a more reliable alternative.

It's not all good out there in self-publishing land. Did John Locke sell 1 million ebooks by paying for reviews? http://t.co/4eu3KTE0

A ‘wide range of responses’

As he frequently does, Jason Boog at GalleyCat pulls off an entertaining twist on the issue, creating a list of Major Bestsellers with More Than 150 One-Star Reviews.

Boog starts with this assertion:

While paying for book reviews creates the illusion of a perfect book, true bestsellers will generate a wide range responses from readers.

He then lists his one-starred best-sellers. I’ll show you the Top Five here, the first being especially gratifying to some, I’m sure, emphasis mine:

4. The Girl with the Dragon Tattoo by Stieg Larsson (432 one-star reviews)

5. A Discovery of Witches by Deborah Harkness (248 one-star reviews)

Despite the fun of that switch-around, the issue of these paid reviews — Streitfeld says Amazon has taken down some if not all of Rutherford’s — presents a coin with tails on both sides.

This is fraud! This guy, along with John Locke and his ilk, should be banned by Amazon for defrauding their clients http://t.co/xmDb4Pxx

How does any market handle this kind of perversion of a key advertising and marketing instrument?

Nate Hoffelder can almost be heard chortling behind the satiric headline on his own follow to Streitfeld’s Times piece, his “Next Great Promotional Tool for Self-Published Authors.”

Hoffelder readily writes of how glad he is that the Rutherford faux-review “service” was shut down by the revelations of some of its own clients:

Once Rutherford’s service was exposed to the light of day, it was dead. The writing blogs took up the torch of shaming him into shutting down, and then Amazon took down some of his reviews and Google cancelled his Adwords account (so he couldn’t buy advertising).

Along the way, however, it’s worth pointing out that self-publishing authors aren’t necessarily the only bad apples here. What’s to have stopped a traditionally published author who wanted to gin up her or his sales of a newly listed book with a splash of gushing, fabricated reviews?

I'd like to see Amazon take a hard line against John Locke, Stephen Leather & other authors who swindled readers w/ fraudulent reviews.

The issue in publishing

Some people will, of course, rush to blame this on Amazon. Having developed the consumer review to be such a key element of retail, Seattle does, of course, need to work to discern and cut the legs off scams of this kind. The company is, I’m sure, the first entity to know this.

But this is not Amazon’s fault.

This is the fault of feckless writers whose relation to what most of us know as the world of literature is so warped that they’re willing to hack the system this way. It’s bad enough when some writers make nasty agreements with each other to “trade” good reviews of each others’ work.

These people have little to do with the world of legitimate traditional publishing or self-publishing. They damage the art and the business for their own gain.

Locke, as his role in this is given to us by Streitfeld, appears to have been a happy customer of Rutherford. Having e-mailed Rutherford in 2010 that he was “ready to roll” with the false reviews he bought, he seems unapologetic now for using such a mechanism to build his now-discredited “success.”

Locke has confessed in the Times to contravening Amazon policy. If you enjoy writing reviews of shoes, you may want to keep an ear out for the sound of another one falling.

For now, we’re left with this echo — shabby chatter in the hard-surfaced tunnel of a digital reality — from Streitfeld’s article:

“Reviews are the smallest piece of being successful,” (Locke said). “But it’s a lot easier to buy them than cultivating an audience.”

Tell me what you think. Is there any case in which buying reviews can be appropriate? Do you know a writer who has bought reviews? If so, how does that writer justify it?

And check out Reading on the Ether, our updating look at books mentioned in Writing on the Ether. Not an endorsement program, just a handy way to keep up with recently noted books.