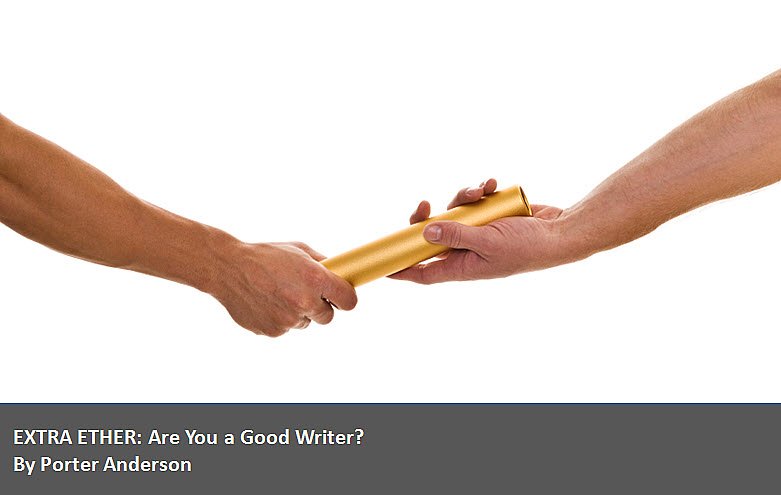 What does the online writing community hand off to good writers?

Good writers figure it out on their own.

No, this isn’t another hand-wringer about “Can Writing Be Taught?” But when I tweeted that “figure it out on their own” line the other day? The RTs went on and on.

A chord had been struck.

Or was that a starter pistol?

Since we’re all beginning to feel like volunteers at the London Olympics, I’m going to fashion this post as something of a relay. The baton of our shared thoughts here will pass from one writer to another. A quick 4×100. Ready…set…beep.

Off the Starting Blocks

Good writers figure it out on their own. Good writers develop a style that works for them. They write, they fail, and they write again.

This “self-immolating preamble,” as he calls it, is from Micah Nathan, author of this summer’s Jack the Bastard, as well as Losing Graceland, and Gods of Aberdeen.

The trick is prying apart the words, the sentences, the paragraphs, and seeing how it all works.

Nathan is telling us what we don’t always remember, but we do know: those good writers aren’t dependent on finding the Magic Blog Post or the Holy Inspirational Devotion that can transform the third vampire author on the left into Michael Cunningham.

Good writers intuitively know this. They certainly don’t need me getting in the way.

Nathan’s short essay is at Glimmer Train. Maybe it’s an anti-essay. (“I find these sorts of essays difficult.”) It’s called Selectively Stubborn. It’s been pointed out by Jane Friedman, host of the Ether and hashtag unto herself.

And it arrives at a time when we need gently to consider a kind of reckoning. No, a recognition. Well, maybe a recognition of what we’re not recognizing. A reckoning unreckoned. About this writing community business we engage in.

Nathan’s piece, of course, is talking-without-talking about aptitude. A faculty. “An inherent capability, power, or function,” as I read it in Merriam-Webster. A certain receptivity to the “goodness” of “good” writing that some have, others don’t.

@Porter_Anderson @micahnathan @janefriedman Indeed. There are things to be taught but at a certain point he's right.

It’s easier if I do this in music because that’s not what do here at the Ether. So it’s less freighted with emotion.

What made Claude Debussy think he could cluster those tones into parallel chords and get some pentatonics going so well that for generations his work summoned up an ersatz Greco-mythic soundscape? Still gorgeous. Eleven years in the Conservatoire didn’t do that. It’s not what they taught in 19th-century Paris. Debussy was “good.” He had something going on inside.

In fact, I don’t see this concept of the “good” writer as dropping the baton in terms of  what Friedman wrote in a contribution to Writer Unboxed in June 2011. (Nor am I saying the “good” writer doesn’t have to get in those 10,000 hours of “practice,” either.)

In 5 Things More Important Than Talent, Friedman wrote of how she dislikes getting the question from writers, “Do I have any talent at this?”

She enumerated “five questions I find more relevant and meaningful”:

Offhand, that might sound as if she’s saying to forget being “good,” it’s more in how you work the system. But no, she’s saying that whatever your talent does bring to the table — whatever that being “good” thing is, if you’ve got it — you don’t become successful by staring at it all day. You succeed by making something of it. And that’s where your attention needs to go. Not to “Do I have any talent at this?”

When you listen to L’après-midi d’une faune, are you worrying about whether Debussy was born with perfect pitch?

And when you read Andrew Miller’s Pure, are you nattering away to yourself about how his prose is, as Jonathan Beckham correctly terms it for the Literary Review, “crystalline, uncontrived, striking, and intelligent?”

They know who they are.

Let’s say you’re part of this web of writers, fiction-lovers, literary editors, and readers in the social-media world…

If you spend time in the literary Twitter- or blogospheres, you’ll be positively besieged by amiability, by a relentless enthusiasm that might have you believing that all new books are wonderful and that every writer is every other writer’s biggest fan.

This is Jacob Silverman writing at Slate. Interestingly, he’s a contributing editor to Virginia Quarterly Review, where Friedman is based. His piece is headlined Against Enthusiasm: An epidemic of niceness in book culture. And we need to pay attention to it.

It’s not only shallow, it’s untrue, and it’s having a chilling effect on literary culture, creating an environment where writers are vaunted for their personal biographies or their online followings rather than for their work on the page.

I’ve got some questions for you. Don’t answer them aloud. Just “ponder them in your heart,” as the Bible would have it.

Why shouldn’t writers and lovers of literature construct an environment that’s wholly comfortable and safe? When your time comes, when your book is published or you finally land that big feature, don’t you want some applause too?

But after surveying the demise of serious literary criticism, he circles back to “the superstructure of the literary world,” our online hives in which “we congregate, allowing us to collapse geography at the expense of solitary thinking.”

We like, favorite, and heart all day; it is a show of support and agreement, as well as a small plea for attention: Look at me, I liked this too. Follow back?

Silverman makes his best argument before we pass the baton one more time, emphasis mine:

A better literary culture would be one that’s not so dependent on personal esteem and mutual reinforcement. It would not treat offense or disagreement as toxic. We wouldn’t want so badly to be liked above all. We’d tolerate barbed reviews, some quarrels, and blistering critiques, because they make our culture more interesting and because they are often more sincere reflections of our passions.

So does the good writer hand out — or want — gushing critiques, merely to engage in the warm-and-fuzziness of it all?

Last handoff: Jacob Silverman to Will Self

My publishers did look a bit grim when it (the new book, Umbrella) came in. I think they felt it was resolutely uncommercial and wouldn’t find readers. But you know…”

This is Elizabeth Day in her graceful observation for the Guardian of author Will Self: ‘I don’t write for readers.’

Five days after we meet, (Self’s new novel) Umbrella is long-listed for the Man Booker prize. It turns out that some other people must like it too.

In the States, it’s available at this point only for pre-order at Amazon, with an American release date of January 8 from Grove Press. 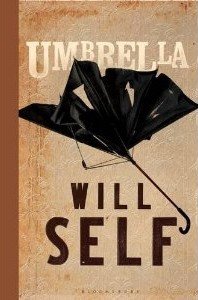 I want to show you a “good” writer at work. The kind of writer Micah Nathan was getting at in his truncated essay.

Here is Day in her piece, quoting Self:

“I don’t really write for readers,” Self says …”I think that’s the defining characteristic of being serious as a writer. I mean, I’ve said in the past I write for myself. That’s probably some kind of insane egotism but I actually think that’s the only way to proceed – to write what you think you have to write. I write desperately trying to keep myself amused or engaged in what I’m doing and in the world. And if people like it, great, and if they don’t like it, well, that’s that – what can you do? You can’t go round and hold a gun to their head.”

Now, contrast that to our community of kudos, our +1s and +Ks and chucks on the digital chins of our mates, all of us being so swell together, as Silverman shows us…and, again, how many of the books of your pals had you actually read when you gave it some thought?

Day is a generous journalist, who stops to be sure we don’t mistake the “Self rule,” if you will, of writing for himself as arrogance:

As it happens, Self is pleased to discover I did like the book. “It makes a difference,” he says.

Day goes on to fill us in on such details as his fondness for the robusta coffee bean — “Self’s conversation is full of such interesting digressions, the product of a restless mind accumulating facts like magpies do glitter.”

And Day’s conversation with Self is a deep and affecting profile, I commend it to you as an example of the kind of work we need to see more of when it comes to our authors.

Then again, we need good authors to profile, don’t we?

Will Self: 'I don't write for readers. I write for a small family of penguins.'

And here we are, our relay done, the baton safely all the way around the track…and where do we look for such authors?

Can you make them out among us between the RTs and the MTs and the status updates and the cat pictures? I’m not sure I can.

By “selective” I mean paying attention to the right folks—a good writer can tell who’s a right folk within minutes—and completely ignoring the rest. It also means not lying to yourself. Hemingway called it having a “built-in bullshit detector.” I can’t improve on that.

His advice, of course, is meant for the good authors.

So here’s what I want to ask you:

Are you that good writer who figures it out on her or his own? Is this back-slapping online colloquy of ours really the best thing for good work? Do we respect good work? Or are we just here for the huzzahs and chest bumps and thumbs-up? Could it be easier to pretend we’re all good writers? –just passing the tweet-baton from one pal to the next?

Reading on the Ether

Books mentioned and/or linked in our story today include:

Join us Thursdays at JaneFriedman.com for Writing on the Ether, presented this week by Ether sponsor Roz Morris and her novel, My Memories of a Future Life.