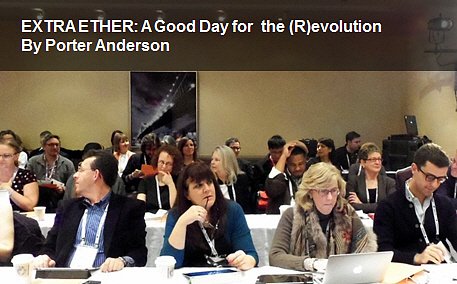 “Digital fiction” author Kate Pullinger of London, near the end of the day, embraced the subtle, central heart of Tuesday’s inaugural Author (R)evolution Day program at the O’Reilly Tools of Change Conference (TOC) installed this week at the Marriott on Broadway.

In almost every element of the contemporary writer’s condition, there are options, so many options, too many options. But tech’s tough-lovely drive is behind them. This choice-choked scenario that energizes some writers but paralyzes many more is derived from the digital dynamic sweeping the creative core of an exhausted industry.

It’s apt, then, that tech- TOC has been the producing body to step up to a challenge I issued on the Ether last year. I wanted to see the authors in, basically—I wanted one or more of our major-conference producing bodies to provide an industry-class event in which the creative corps (and core) of this business could hear from top-level practitioners, observers, analysts, with a view to pounding out a serious way forward.

I saw publishers, CEOs, CTOs, CIOs, COOs mixing with innovators, startup chieftains, researchers, analysts…and no authors, no one who creates the fundamental element of publishing for all the rest, the stories.

After Tuesday’s event, I want to say thank you to Joe Wikert, Kat Meyer, their co-chair Kristen McLean — and to Tim O’Reilly, himself, who came to “#ARDay,” sat with us, watched and listened. O’Reilly is an organization that has stopped to turn and look at a pressing issue so richly associated with the upheaval and promise of a new publishing landscape. They’ve not only looked at it, but they’ve addressed it with a first outing that was, as promised, no tips-‘n’-tricks writers’ confab of the usual needlepoint-lessons variety.

Here are several important ways in which Author (R)evolution Day has arrived as an authors’ conference for entrepreneurial creative professionals:

Meyer asked us at day’s end to help pinpoint areas in which we’d learned things. There were easily identifiable themes resonating all day in various sessions.

Authors, including Pullinger, Cory Doctorow, Mark Jeffrey, Scott Andrew James, and Amanda Havard of Immersedition, were on hand, as were writing counselors and program leaders including Eve Bridburg of Grub Street, who outlined the “logic model” she’s using with career-building authors in Boston.

Literary agent Jason Allen Ashlock—whose Movable Type Management has created the new Rogue Reader author collective—told the room with a wry smile that an author working alone in the business today may not be adept at what’s needed, “no matter how many times you’ve read Guy Kawasaki’s book.”  The agent as a rapidly evolving “radical advocate,” he said, is the only such support equipped to stay with authors for the long term of the changes ahead.

For the first time in my conference-coverage experience, a session on metadata for authors was included, with one of the country’s leaders in the field of identifiers, Laura Dawson of Bowker. One study, she said, has shown that simply adding a book image could increase reader interest in a book by more than 260 percent. The importance of good data, and of monitoring your data, she explained, cannot be overstated.

“Without this information, you’re leaving readers with a lot of questions,” Dawson said. “Or no questions, which is worse.”

From marketing and discovery discussions with Author Day co-sponsor (thank you) Publishers Weekly’s Cevin Bryarman and Kobo’s Mark Lefevbre to community and audience-creation debate with Wattpad’s Allen Lau and distribution points from Net Minds’ Tim Sanders, the tone and pitch of the day was rooted in responsibility—the author’s responsibility to educate him- and herself, to learn to flex long-unused business muscles by understanding the business and tackling deficiencies.

Last year, I left Digital Book World (DBW) and TOC frustrated because authors were all but invisible in these great annual high-end state-of-publishing productions. It felt scandalous to me that as a journalist I could hear from publishing executives, analysts, commentators speaking to each other…as if the authors weren’t on the need-to-know list about a market smoky with confusion and wholly dependent on the creative essential produced by the absent authors.

This year, as TOC “proper” goes forward Wednesday and Thursday, the picture has changed, thanks to O’Reilly Media’s first-class response to that appeal, complete with a daylong free video stream of the events provided for authors who couldn’t be with us.

Thanks to TOC’s Shirley Bailes, I can tell you that the presentation slides made available by ARD speakers are being posted on this page, and many are available now, including those I put together for my onstage interview with Bridburg.

You see what I mean about TOC being a class act.

The bar hasn’t been raised, it’s been set, and for the first time. TOC’s program is singular in its scope and fully up to the crisp standard of the production capability we know as its trademark in international conference events in publishing.

This Author (R)evolution was a good Day for writers. I look forward to many more.