In 2012, I wrote the following post as a warning to self-published authors who fall prey to scams that take advantage of the highly recognized industry trade show, BookExpo (BEA), previously known as BookExpo America. I have updated this post since so much has changed in the last five years, both in regards to this particular trade show, as well as the publishing industry.

Important: In the past, BEA has taken steps to ban companies/organizations who resell BEA marketing opportunities at exorbitant prices. Still, while BEA attempts to educate and protect authors from making expensive mistakes, be smart and do your research before you make BEA part of your strategic marketing, publicity, and PR plan.

First, a little background: What is Book Expo (BEA)?

It’s the largest industry trade show in North America focused on traditional publishing. It started off as a convention for booksellers (the American Booksellers Association), and it’s attended mostly by people inside the industry, including literary agents, booksellers, librarians, and the media. The bulk of BEA consists of an exhibit floor where publishers purchase booth space to show off their upcoming titles (and authors), sell rights, and network with colleagues. There’s also a separate rights area where literary agents often have tables.

Yes, but usually at the invitation of their publisher. Every year, traditional publishers decide what specific titles they want to push heavily at BEA, and will often invite the authors to do signings or events meant to bring visibility to the work pre-publication. Remember that “visibility” in this context means visibility to the trade (the industry), not visibility to consumers. There’s a separate event—BookCon—that focuses on consumers.

In 2014, in acknowledgment of the growing indie author market, BEA opened up an exhibit area where indie authors could buy affordable tables to conduct meetings and network. It was initially known as “Author Hub” and is now called “Author Market.” This is not an opportunity to sell books—selling books is not allowed at  BEA. You can give away copies, though. Here’s the Author Hub sales sheet for 2016.

Should you exhibit at Author Market?

If you’re a professional, independent author with a significant history of sales, and already know of other professionals you could potentially meet and network with at BookExpo, then it may be a good opportunity for you. This is not a good opportunity for an author who has just published their first book, and thinks visibility at BEA might fix their marketing and promotion problems. It will not.

Whether or not you exhibit at Author Market, BEA is not a shortcut to getting up close and personal with traditional publishers or literary agents, in the hopes one of them will publish or represent your book. You’ll greatly annoy people if you go pitching on the floor, unless it has to do with subrights or licensing. If that is indeed your goal, you should have a very polished pitch, and demonstrate a successful track record. Best-case scenario: set up meetings in advance and don’t ambush people.

BEA is generally not interested in unaffiliated authors walking its floor, because every editor/agent hides from the author who is pitching their self-published work. You can see the unwelcome mat reflected in these 2017 registration prices (highest for authors!); authors must also be “approved” for a badge. 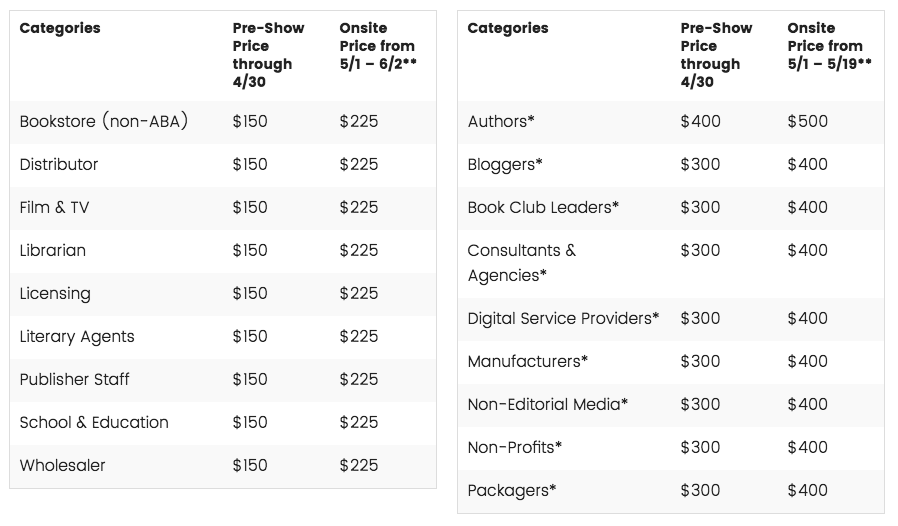 Avoid paying to have your book promoted for you at BEA

Aside from the Author Market, there are a handful of opportunities for authors to get visibility for their work at BEA. As far as I’m concerned—as someone who attended this show for 10 years, mainly as an editor with a traditional publishing house—it is not worth the investment. Here’s why.

BEA is a quality industry event, and it is a legitimate marketing and promotion opportunity. But for the majority of indie authors, it does not make sense to invest what are likely your limited resources in BEA.

For more insight and advice