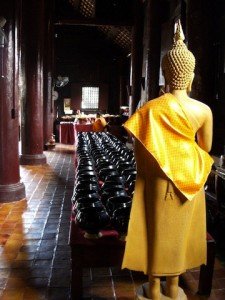 Inside a Buddhist temple in Chiang Mai, Thailand

“The master in the art of living makes little distinction between his work and his play, his labor and his leisure, his mind and his body, his education and his recreation, his love and his religion. He hardly knows which is which. He simply pursues his vision of excellence at whatever he does, leaving others to decide whether he is working or playing. To him he is always doing both.”

What’s the most common advice you hear at writing conferences? That it all takes a lot of work. That there aren’t any shortcuts. That you have to put in the time.

Of course, that’s common advice about all types of things in life. People even talk about how much work is required for lasting, romantic relationships.

I don’t want to pick an argument with those who defend the value of good, hard work.

However, I would like everyone to stop feeling guilty about the time they spend “playing” online—especially on social media.

Yes, of course it’s possible to waste a lot of time on such things. But it’s also possible to PLAY and WORK at the same time.

If your play is building stronger connections to other people, opening your mind up to new possibilities, spreading the word about what you do, or helping you understand things about yourself and your writing, then continue to play.

If your play is allowing your mind time to work out difficult problems, giving you an opportunity to recharge, or reducing stress, then continue to play.

If your play is not at all serious or productive, and has no point whatsoever, then continue to play. That is real play, after all. (And sometimes, as Americans, we’re just too damn serious and insistent on productivity.)

Caveat: There’s a difference between play and escaping from or avoiding things we fear.

Hopefully you know the difference. (Refer to the quote above.)