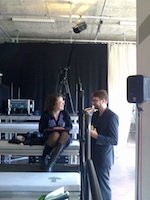 Last month, I gave a 15-minute presentation in Berlin, Germany, called The Future of the Author-Publisher Relationship, as part of an innovative publishing think-tank event called LitFlow. To accompany my talk, I wrote a 2,500-word article.

In a nutshell, I suggest that—given the changes happening in the industry—traditional publishers will need to be more author-focused in their operations by offering tools, community, and education to help authors be more successful, to everyone’s greater benefit. If publishers fail to do so, then authors, who have an increasing number of publishing options available to them, will depart for greener pastures. I pointed out that Amazon has a VP of author relations, and views the author like a second customer, but publishers have no such author-relations position or focus on authors as a community to be served. I recommended publishers create their own VPs of author relations and be more strategic in serving authors on a long-term, broad basis rather than on a title-by-title basis.

Unsurprisingly, I’ve seen a lot of public shares and comments about this piece from authors, but very little from those working inside New York publishing. Part of that is natural—I’m known mostly to authors and they follow me. The other part, though, is that my proposal is flawed, even laughable, if you’re part of the Big Six engine. Let me count the ways.

1. Publishers’ most important service to authors is undertaking the financial risk of their creative work.

If you sign a traditional deal with a Big Six house, you’ll receive an advance. But most authors (up to 80%) never see royalties; their books never earn out. That means most publishers pay more to authors than what prevailing royalty rates might indicate, though there are reports that advances are declining.

Still, publishers (and agents) by and large make it possible for authors to focus more on writing than the business. Even if authors don’t earn a living wage, most are not eager to shoulder the risk alone. Now, some might argue that e-publishing and digital distribution has greatly reduced financial risk for creative work—even driven it to zero. But there remains an opportunity cost. You’re not doing something else: you’re not spending time with loved ones, you’re not working another job, you’re not learning a new skill, etc. So, again, I think it’s reasonable to assume that most authors would like to be less exposed to risk.

I participated in a recent conversation where a publisher-insider asserted that Amazon KDP (and similar DIY e-publishing services, pick your favorite) offered nothing to authors, while taking 30-70 percent for offering that nothing. Point being: Amazon doesn’t lift a finger for KDP authors, for the quality of the work, or for the marketing and promotion of that specific work; they don’t do anything a traditional publisher would do. Amazon assumes no risk yet receives a nice cut, while the author is 100% exposed. All KDP authors could fail, but ultimately Amazon loses nothing, having offered nothing. They only gain.

Of course, this “nothing” that Amazon offers has been a pretty attractive nothing for authors rejected by traditional gatekeepers. This nothing provides authors an equal opportunity to play along with the big dogs at the biggest e-retailing storefront in the world. This nothing is earning authors some meaningful money, whereas 5 or 10 years ago, it would have been near impossible for an author to expect any results at all from an e-publishing or self-publishing effort. (Plus there are other ways that this “nothing” can be even better than what a traditional publisher provides, but I’ll leave you to discuss that in the comments.)

Still, it’s a small percentage who turn Amazon’s “nothing” into something—thousands upon thousands of authors go unnoticed—but it’s an opportunity all the same for those with grit and determination. Who does it hurt if most people fail, if they’re happy to have had the freedom to try? (And who determines what constitutes failure vs. success?)

Well, some might argue that allowing people to publish sub-standard material (also known as crap) is not helping anyone. Such an argument might be considered elitist (who’s to say what’s crap?) unless you’re able to demonstrate that these new opportunities are hurting writers in the long run—in a way that these writers would understand and agree with. There might be a way to do that, but that’s for another post.

Getting back to ways my proposal is flawed …

Most authors would greatly prefer their publisher pay them more money (and they’ll use that money to pay a marketer if needed), rather than be given tools and community to support their livelihoods. While I personally might find this a short-sighted view—one that makes the author more dependent on the publisher than she ought to be—it’s hard to argue with. Authors typically have skills that make them wonderful at writing, but lousy businesspeople, and as much as I believe in finding ways to change authors’ whole mindset, approach, and idea of what it means to be entrepreneurial and empowered on the business side, there’s no arguing against the fact that nearly everyone does better when they can focus on their strengths and minimize the time they spend on everything else.

(I do have to put a big asterisk on this, however: I’m speaking primarily of creative writers and storytellers, not non-narrative nonfiction writers. Non-narrative and non-creative writers really need a whole other discussion, and likely pose the biggest flight risk from the Big Six. See: Tim Ferriss, though he’s reportedly not too happy right now with his Amazon deal and lack of print sales.)

Thought of another way, if you believe the government should fund arts and artist grants—in part because the arts can’t and shouldn’t be run entirely like a business and deserves societal support because its value and strength gives even more back to society as a result—then you’re probably sympathetic to authors also being supported by publisher-patronage, and not burdening themselves with the business of their art. Workaday concerns are a distraction, and writing great things requires focus and huge amounts of uninterrupted time.

Also, when publishers support a project, they generally are able to provide more skills, strengths and resources than a single author can manage working alone. (That is certainly debatable, though, and depends greatly on the author.)

3. The Big Six will never have sufficient motivation to do more for authors than they already do.

Only an unfailing idealist like myself would think a Big Six publisher would expend resources on author relations and support. As long as the publisher can offer a reasonable deal, or lend the stamp of approval that authors crave, or provide quality editorial support, that is likely more than enough to prevent the author from moving to another arrangement if they’re not entrepreneurially minded to begin with.

Or: It boils down to three desirables that publishers offer.

The publishers are getting increasingly challenged on the first (money), and they’re now having to prove they provide the second (service). My presentation too rests on the theory that authors may choose alternate paths that bring more money (and in some cases, more service) since so many are dissatisfied with Big Six service (including—but not limited to—editing, marketing/promotion, and publicity).

That leaves us with status. I’ve long extolled the virtues of tools and technology that empower the author, give them more insight into their readership—and power to grow and mobilize it—and democratize the publishing landscape. However, I can’t ignore human nature, which pushes us to seek validation and gives us status anxiety when we lack the traditional signifiers of approval. (Here enters the old self-publishing argument that readers decide what is “good” rather than traditional gatekeepers. This argument is very convenient and necessary for the author without traditional signifiers of approval.)

While plenty of authors successfully publish and gain a following without first gaining approval or permission, most are rightfully susceptible to the honor and prestige that comes with being anointed or accepted by a particular house, editor, agent, prize, review … choose whatever status symbol you like. Furthermore, even if your book utterly fails (on a commercial level) with a traditional publishing house, being able to claim you’re published by Penguin, Random House, or HarperCollins is a kind of currency in itself. That can open doors and lead to other types of paychecks.

The shrewdest authors—those who are primarily interested in their long-term business success and could not care less about acceptability on New York’s terms—will be the fastest to find other paths, and that’s exactly what’s happening. What are these other paths? Well, Amazon KDP, Smashwords, and numerous other DIY services are only part of the picture. Services such as Rogue Reader, Brightline, and various author collectives are emerging as competitive partners to shoulder the risk—and these are just the early days of such models. Given industry change, a start-up can reasonably challenge publishers on at least 2 if not all 3 of the desirables mentioned above.

Still, for my idealistic vision to be taken seriously, the Big Six (maybe soon to become the Big Five), would have to lose valuable authors. They’d have to suffer. So far, the loss has been minimal, and most self-publishing authors who strike it rich are only too happy to sign with a big player and see their sales skyrocket into the millions from the hundreds of thousands. A lot more has to change in the industry to convince publishers to be more service-oriented toward their authors. But if and when it does change, will it be too late to convince authors who offers the best partnership?

I’d love to hear your thoughts on my presentation—and this post, serving as an anti-presentation!—in the comments.