Today’s guest post is by Elizabeth Sims (@ESimsAuthor) and is excerpted from The Complete Handbook of Novel Writing, an anthology compiled by Writer’s Digest. (I’m a contributor to the anthology as well!)

A while ago I attended an inventors’ club meeting. Some of the members had already launched successful products and were working on more, while others were merely beginners with great ideas. The beginners were commiserating about how hard it is to deal with financing, raw materials, manufacturing, promotion, and all the rest, when one of the experienced inventors suddenly stood up. “Look,” he said impatiently, “ideas are a dime a dozen. It’s the development that puts you over the top. Do what you have to do to make it real and get it to market.”

I was surprised, because I’d always thought that a brilliant idea could make you a fortune. But I quickly realized my new friend was right: Idea is just the beginning.

Fiction writers have a lot in common with those inventors. It’s not hard to get inspired by a great concept, to take it to your table or toolshed or cellar and do some brainstorming, and even to start putting the story on paper—but eventually, many of us lose traction. Why? Because development doesn’t happen on its own. In fact, I’ve come to think that idea development is the number one skill an author should have.

How do great authors develop stunning narratives, break from tradition, and advance the form of their fiction? They take whatever basic ideas they’ve got, then move them away from the typical. No matter your starting point—a love story, buddy tale, mystery, quest—you can do like the great innovators do: Bend it. Amp it. Drive it. Strip it.

Chuck Palahniuk is on record as saying he drew heavily from The Great Gatsby to create his novel Fight Club. I’ve read both books (multiple times) but would not have perceived that parallel. He said, “Really, what I was writing was just The Great Gatsby updated a little. It was ‘apostolic’ fiction—where a surviving apostle tells the story of his hero. There are two men and a woman. And one man, the hero, is shot to death.” Palahniuk transformed a traditional love story set in the high society of America’s Roaring Twenties into a violent and bloody tale of sexual obsession, cultism, and social disruption set in a rotten world.

He bent the ideas behind Gatsby into something all his own. The next time you get a great idea for a story, don’t stop there. Bend your initial concept, making it more unique—and more powerful—with every turn:

Brief Encounter is a British film adapted from Nöel Coward’s play Still Life. It’s the story of two quiet people who meet and fall in love in spite of being married to others, but then, conscience stricken, break off the relationship before it really gets going. The small, exquisite tragedy resonated with the genteel, romantic codes of conduct valued in prewar England.

But then along comes Tennessee Williams with his play Cat on a Hot Tin Roof, a love story that has similar themes at its core but rips us away from any semblance of civilization. Could Williams ever amp drama! For one thing, he knew that a story about noble ideals wouldn’t cut it anymore. Setting his play in the emotionally brutal mélange of the postwar American South, he slashed into the secret marrow of his protagonists and antagonists alike, exposing the weaknesses and delusions that bind people together on the surface while tearing them apart below decks.

Take the essence of your story, and amp it:

Many great modern stories spring from the same seeds as old folk tales. The subjugation of young women, for instance, is not only one of the oldest oppressions, it’s one of the most pernicious—hence, it still resonates with audiences of all sorts. We first meet Cinderella in the scullery, a slave to the rough demands of her stepmother and older stepsisters. When Cinderella tries to take some initiative to improve her situation, she’s squelched and punished.

Margaret Atwood, in her landmark dystopian novel The Handmaid’s Tale, steers the Cinderella archetype away from any home whatsoever and from any relationships, besides. She multiplies Cinderella a thousand times, and all the Cinderellas are kept alive for the sole asset they possess that can’t be synthesized (at least, not yet!): their fertile wombs. Their purpose is to procreate a society that would be better off dead. And there are no handsome princes to come along and change anything.
Atwood drove Cinderella to a point almost—but not quite—beyond recognition. And that’s the power.

You, too, can make gut-wrenching magic out of your fiction by driving your tale to a conclusion further than you ever thought it could go:

War has been the seed of innumerable creative works. In developing War and Peace, Leo Tolstoy put in everything he could think of because war is so big. To represent the French invasion of Russia and the accompanying Napoleonic era, he wrote an epic that followed dozens of characters. The sheer, pounding weight of detail in War and Peace helps us understand the impact of war on individuals and the institutions they thought to be unshakable.

But Ernest Hemingway, a young man reeling from his own experiences in World War I, stripped away everything he could think of because war is as small as one man. Confronted with the realities of war, he wrote what came to him, then stripped it and sanded it until nothing but hard, bright pieces were left. The result, In Our Time, is a collection of vignettes and short stories that evokes the immediate horror and lingering pain of that most awful of human activities.

When it starts to seem as if no number of words can truly represent the reality of anything, explore what might happen if you strip down your idea to allow the miniature to suggest the infinite:

When you implement these techniques, don’t bear down hard on any one; take a light, relaxed approach and allow idea to build on idea. If you do that, your innate creativity will take over. It knows what it’s doing! At times when you’re really rolling, your ideas will seem to develop themselves; they’ll pop brighter and bite deeper. 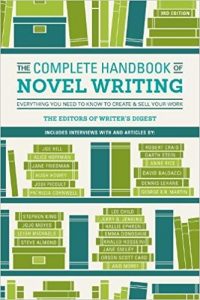 And like the best inventors, who combine brilliant ideas with the guts and drive to make them reality, you won’t be stuck drumming your fingers on the drafting table. You’ll be producing well-developed stories with the optimum chance of success.

If you enjoyed this post, I highly recommend reading Elizabeth Sims’ book, You’ve Got a Book in You. Or, take a look at The Complete Handbook of Novel Writing, with more than 70 articles by expert writers and teachers.

Elizabeth Sims (@esimsauthor) is a bestselling author and writing authority. Booklist described her crime fiction “as smart as it is compelling,” and Crimespree magazine praises her “strong voice and wonderful characters.” A contributing editor at Writer’s Digest magazine, Elizabeth’s craft-of-writing advice has appeared in those pages since 2006, and she’s a sought-after speaker at conferences around the U.S. When time permits she coaches aspiring writers individually and through workshops. She loves to help fledgling authors find their wings!