When James Michener wrote Alaska, he spent the opening chapters describing the geological formation of the North American continent, and readers “watched” the gradual emergence of the Alaskan terrain—at just about the speed of those glaciers moving across the earth’s surface.

That style—broad, distant, and comprehensive—followed a long line of novelists from Defoe to Hugo into the last century. But like most aspects of novel writing, description has grown sharper over time.

More than any other element of fiction writing, description creates immersion. It’s important to get this one right.

In modern writing at least, description is best understood as a function of point of view. It needs to be personal. Another way to say this might be “description must reveal character.”

A common pitfall in visual description is giving a laundry list of physical characteristics, ticking every box, so to speak. But it’s hard to pick out important details from a multitude of unimportant ones—and readers will fill in a lot of gaps themselves, so much so that they can find it annoying to have every feature of someone’s face spelled out for them.

(Personally, I never could picture noses the way 19th-century writers tried to describe them. In my mind’s eye everyone just ended up with a nose disproportionately affixed to their face.)

The key with visual description, then, is to give just a few details—but run those details through the “reveal character” filter.

April heard the sound of a window being pushed open as Richard climbed out of the second-story lookout. He made his way gingerly across the shining shingles and sat down next to April, handing her a warm travel mug.

They made an odd couple. Richard was a six-foot-two black man with a neatly trimmed beard that outlined a square jaw beneath intense brown eyes and fine eyebrows. His hair was close-shaved. He wore a well-tailored black suit, polished shoes, and a red tie. A ring on one finger was a gift from his father many years ago. His features were chiseled yet gentle. Beside him, April was a five-foot-two blonde, her hair light gold. She was slender, with pretty features, but had a toughness in her face that spoke of a past. Her hair was up in a ponytail, and a grey wool blanket was swathed around her shoulders.

The coffee warmed her quickly, and she shed the blanket, revealing black track pants, an orange tank top, and blue Nike sneakers. A rose-vine tattoo inked across her right shoulder made her look even tougher, yet with a feminine grace. Warmed by the sun, April’s shoulders and arms were well-muscled—she had the frame of a runner.

April heard the sound of a window being pushed open and a grunt as Richard climbed out of the second-story lookout. He made his way gingerly across the shining shingles and sat down next to April, handing her a warm travel mug.

They made an odd couple, April thought—the six-foot-two black man with a neatly trimmed beard and close-shaved hair, wearing a suit, and the five-foot-two blonde with her hair in a ponytail and a blanket swathed around her shoulders.

The coffee warmed her quickly, and she shed the blanket. The sun warmed her bare shoulders and brightened the rose-vine tattoo inked across her right. She wore a tank top and track pants and sneakers. Ready to run.

The second example (from my novel Exile) gives far less detail about these characters. But it zooms in on important ones, heightening the contrast between them and hinting at aspects of their character: Richard’s professional, self-controlled demeanor, and April’s mix of tough and vulnerable. Details like the color of their clothing, specific facial features, and muscles just distract us from seeing what’s important in this scene.

When you’re describing setting, things get even more interesting (here I’m borrowing from Exile as well):

Reese stood in the living room of a small cottage on a cliff, looking out over the ocean. The room was longer than it was wide, with low sloping ceilings. Windows covered three sides from a foot above the floor to just below the ceiling. The fourth side sported faded wallpaper patterned with fishing boats and nets. Cobwebs in the corners made it obvious the inhabitants didn’t clean much. Stacks of books and old magazines sat on the shag carpet next to a worn-out plaid wool couch. They were dusty. The air in the room was warm and smelled slightly burnt from the old electric space heater positioned behind the couch.

Outside, a storm raged over the water. Black tumultuous clouds. Forked lightning and thunder. Rain pelted across the water in sheets. Waves whipped up in a white-capped frenzy. To the right she could see the town and the masts of boats in the harbor, bobbing in the storm. Far below, the headlights of a car winding its way along a cliff road streamed through the wet darkness.

With windows on three sides that covered nearly the whole wall, the room made Reese feel enveloped by the storm. Black tumultuous clouds. Forked lightning. Thunder that shook the walls. Pelting rain. It was a classic coastal storm, wind slamming the cliffs and churning the sea in a white frenzy she could just see from here, despite the darkness.

She stood by the window, placed a hand on the glass. Thunder cracked, and the glass strained against the wind howling up the cliff and battering the cottage.

Surrounded by the storm—except that she stood behind windows, in the warmth, smelling the faint burnt smell of an old heater, wrapped up and clean and dry except for her hair.

She sighed and leaned her head against the window as if it were too heavy to hold up on her own.

I like the atmosphere conjured up by the first passage, but it focuses so much on various details of the room that it fails to use the setting effectively to reveal character and mood. Rather than revealing the story, it leaves it behind for a while.

The second passage, on the other hand, focuses on the storm, on the way Reese feels swallowed by it, and on the strong contrast between the turmoil outside and the warm atmosphere within, all of which mirrors what’s happening in Reese’s own heart and in the plot of the novel.

In this example, yes, we’re getting a setting. But we’re also getting insight into a character and forward motion in the story itself.

And well-written description doesn’t just create a setting for your story; it can also contribute to theme, and of course, mood. If you’ve ever read a story that felt dark, or light, or gritty, or weird, or mythic, chances are that mood owed a lot to the author’s use of descriptive detail. 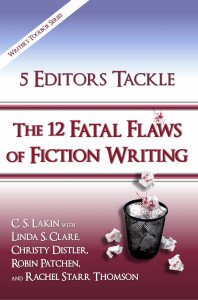 One final word on the subject: while you’re writing, try not to overthink description. Throw yourself into the scene and write what comes. The example passages in this post strongly reflect the themes of the book, but I didn’t think about that while I was writing them. In fact, it’s overthinking that’s more liable to get you writing laundry lists.

Steep yourself into the mood of the story. Write. Then go back and make sure the details are doing what you need them to do.

Rachel Starr Thomson is the author of eighteen novels. As an editor and writing coach, she has helped writers achieve their best work for over a decade—so she’s thrilled to contribute to The Writer’s Toolbox series, which gives fiction writers everything they need to know to create compelling, solid stories. The newest release—5 Editors Tackle the 12 Fatal Flaws of Fiction Writing—is available here and features more than sixty detailed before-and-after examples of flawed and corrected passages to help authors learn to spot flaws in their writing. You can check out all Rachel’s books at her website.