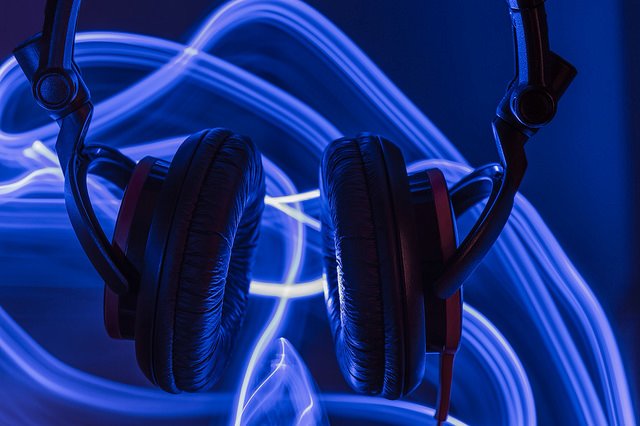 
Setting yourself up for success with audio will rely heavily on you, which is scary, I know. Don’t worry—we’ll get through this. If you can get your ducks lined up properly now, you’ll find it flows later on.

Like art (something we can cover later), good audio requires having an idea of what it is you want before you even think of approaching talent. You might not believe you have an ear for it, but as the author you have an inside track on the perfect narrator. We’ll start with that first, and I’ll walk you through my process for producing the audio for Into the Nanten, the world’s first real-time fantasy blog turned world’s first real-time fantasy podcast (so if this feels daunting, know that I totally get you).

Here’s the biggest question to ask yourself: What story am I trying to tell?

The voice is the biggest indication to readers of what kind of story they’re about to hear. Into the Nanten is told in first person by a warrior-turned-adventurer, much inspired by Heart of Darkness and the exploits of Stanley and Livingston. I knew I needed a voice that would reflect the tone and world.

The character, Marceles, is male, which makes for the easiest qualifier. He’s in his thirties, so he needs to sound mature. He’s a bit of a womanizer, well educated, and confident to the point of cocky. I wanted someone with British inflection, ideally deep tone, and with enough range to do some voices as Marceles encounters new people in the depths of the jungle.

Once you have this pinned down, it hones you in on a small subset within the ocean of voice actors for hire. The first step is finding samples. Sites like Voices.com or VoiceBunny.com will allow you to filter based on gender, age, language, and accent—then you can listen to samples. I tend to use sites like this to browse, but not to make contact. Posting a job to a site like this may lead to interest from actors, but it will leave you with extra work and a lot of rejections to hand out.

After an hour of searching, I found my man, Dennis Kleinman, a South African (major adventure points) with a deep sultry voice and an “International British Accent.” I searched for his website, then contacted him there. Whenever possible, I think it’s best to cut out the middle man. And some of these audio websites will actually call you—repeatedly—once you set up an account. User be warned.

You can hear Kleinman by playing the clip below—it’s the first chapter of Into the Nanten.

Because this might not be self-explanatory: When you approach your prospective talent, remember that they are professionals. They need to pay their bills and feed themselves. They also owe you no favors and probably have no idea who you are. You should be as winsome as you can be; you are a writer, after all, so this shouldn’t be so hard. Don’t go overboard, but tell them a little about yourself and your story, then tell them why you think they would be a great fit.

Do ask for a quote, and don’t be afraid to tell them upfront what your budget is. While it’s appropriate to offer to split royalties or work out a payment plan that suits you both, it’s not okay to ask them to work for free.

One of the safest ways to go about setting up your arrangement is through ACX. This is how Dennis and I did our first round—it guarantees quality and acts as legal protection for both parties. It also means that when you’re done working on it, you can go straight to retail.

Payment is usually done by the finished hour, and you get what you pay for. It can range between $50 and $500 per finished hour, so be prepared for that. ACX will estimate how long your book will be in audio, so you can do the math in advance and see what the cost will be depending on who you hire.

ACX worked for Journal One of Into the Nanten. But since we wanted to produce Journal Two in real time along with each written entry, we had to go about it differently the second time through. Dennis is amazing (go hire him). We built a great rapport and worked out a deal for Journal Two on our own: he uploads the entries to Dropbox as he finishes them and invoices me as we go.

I use Blubrry for the podcast hosting, and then both seasons are available to stream for free as playlists on SoundCloud. Podcasts are a totally different conversation though, so let’s move on.

If you ever hoped to get producer or director credits, now is your chance. Whether it’s by chapter, or (in my case) by entry, I strongly suggest you listen to each and every second that is sent your way. There are a few reasons for this, but the principal one is to catch errors. They happen, whether they’re mispronounced names, misspoken words, or artifacts left behind in editing. This does not mean, however, that you should nitpick your actor to death.

Once you’ve found your talent, you need to trust them to do their job. You can still give them direction, like if they’ve misinterpreted the emotion of a scene or habitually mispronounce the word egg. But at some point you need to sit back and let them roll with it. This is why choosing the right person is so important, because when it comes down to it you aren’t going to like absolutely everything that comes out of their mouth.

However, if you give them some direction and encouragement toward what you think is best, you’ll be thrilled with the results. My early exchanges with Dennis were filled with notes on inflection, emotion, and the nuance of Marceles’s writing style. It didn’t take long before Dennis had put the character on so completely that my notes tended to be filled with praise and little else.

Below you’ll see a screen capture of the early edits for Into the Nanten, followed by later edits. 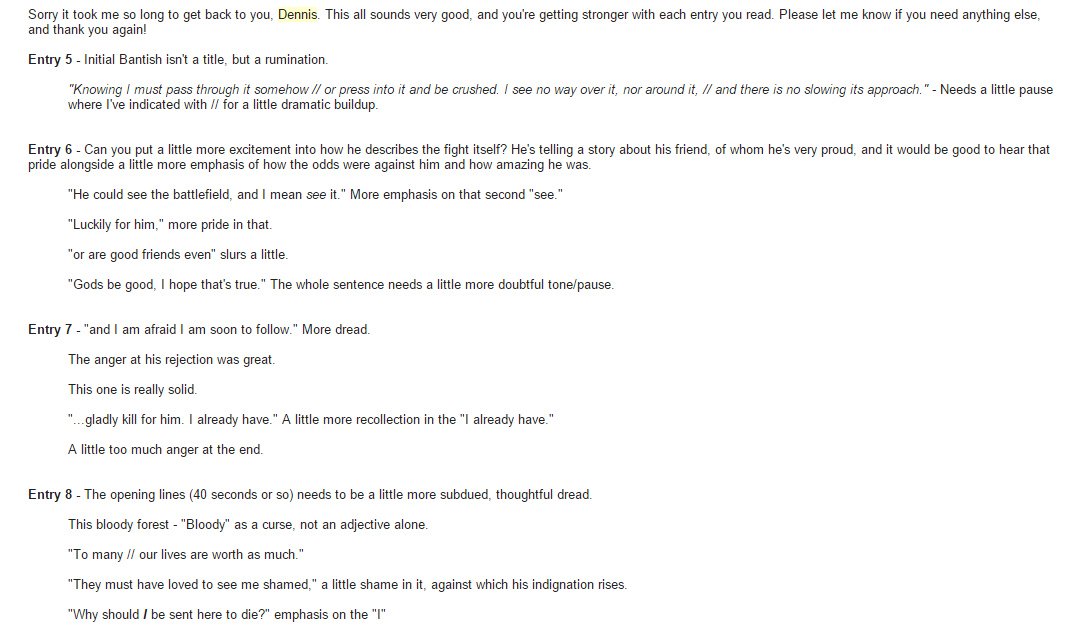 Early edits for Into the Nanten (click to enlarge).

Later edits for Into the Nanten.

If you used ACX for the whole process, releasing the audio is pretty much as simple as clicking a button. Once you’ve cleared standards for Audible and iTunes, you’ll find your work available for purchase, and the mountains of cash will start pouring in. Okay, that last bit was tongue-in-cheek, but you’ll make a few dollars.

This brings us around to a point that I didn’t cover, which is whether or not audio is the right choice for you—because it can be expensive.

Journal One of Into the Nanten cost about $3,300 at $300 per finished hour. I got what I paid for in Dennis, but it’s going to take a long time to pay for itself. Especially since we’re giving it away for free. (Thus the need to Kickstart the third season—we’ll be asking for more money this time. March 4, mark your calendar.)

This is the biggest barrier for most of us as self-published authors—it’s why none of my other books are available in audio yet. However, audio is huge and growing. I have fans who have said they’ve stopped reading, but will listen to whatever I produce. There’s also a market of people who may never find you without audio available. 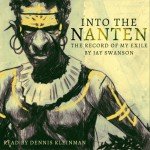 If you have any questions, feel free to ask in the comments below and I’ll do my best to respond quickly!

Jay Swanson's latest project, Into the Nanten, is the world’s first real-time fantasy blog following a man in his exile to the world’s most hostile jungle. Its second season was successfully Kickstarted in April 2015. You can sign up for his newsletter (which he only uses for important stuff like book releases, so fear no spam), follow him on Facebook, or find him on Twitter! If you’re on Instagram, Jay’s been posting one photo every day since December 2010—when he first moved to South Africa.