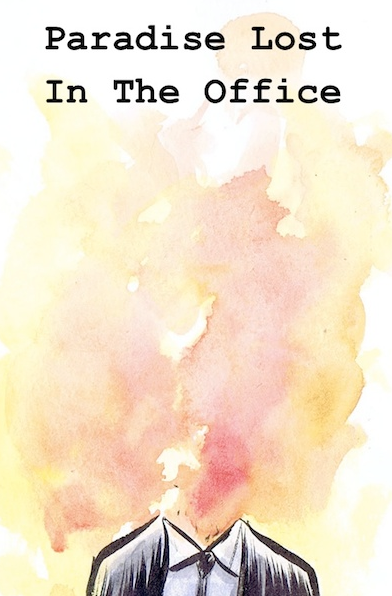 Today’s guest post is by Jason Braun. You may remember him from an earlier guest post here at JaneFriedman.com: If the Book Is Dead, Then Why Buy a Zombie? I like this story because it illustrates new ways of thinking about your stories or content, plus not letting lack of technical skills stop you from playing around with new media.

As anyone who has ever seen a heist film knows, it always starts out with a sequence where the criminal mastermind assembles the perfect team. Turning a graduate student paper I wrote—”Paradise Lost as a Primer on Office Politics”—and turning it into the 144th most downloaded paid business app was surly a heist or coup of sorts. This is how I did it, with no computer programing skills, and how you can do it to.

Before I got a team together to help me create what became Paradise Lost in the Office, I met Al Katkowsky, creator of the app Question of the Day. This all went down at Jane Friedman’s 2011 AWP panel, which I have written about before. If it hadn’t been for Al and Jane, I wouldn’t have ever started. Among other brilliant points, they both came to the conclusion that apps are just another form or container that stories and ideas can be poured into. Here’s the summary of my project and app:

Paradise Lost in The Office is the app that asks, “What Would Lucifer Do?” The quotes pulled from John Milton’s epic cut through the philosophical fluff of the ages to the essence of power, spin, and strategy. Milton’s words hold their own against Sun Tzu’s The Art of War, Miyamoto Musashi’s The Book of Five Rings, or Niccolo Machiavelli’s The Prince. Paradise Lost works as an instruction manual in spin, niche marketing, employee motivation, outsourcing, hostile takeovers, and geoarbitrage. Read the quotes on the subway, while you are stuck in traffic, or while your boss has their back turned to you when pointing at some chart. These words from Milton are actionable, but take action at your own risk.

After writing the paper my first move was to find a programmer to code this for me. I have always had friends in the tech industry. I always wanted to collaborate with these brilliant friends of mine. I always wanted to be part of this game. With the rise of the digital humanities, the popularity of apps, and the creative content of the web, the world of the hacker is converging with the world of the writer.

Between advice from tech friends, and what Al had told me in a radio interview for 88.1 KDHX, I priced coding from $500–$1,000. I was using Al’s Question of the Day app as a model. Both his app and mine are similar to a deck of flashcards. The user scrolls across the screen and a new card pops up. More complicated apps are more expensive because they take longer to code.

I didn’t have to put up a Craigslist ad or go to the outsourcing sites such as freelancer.com or the more popular elance.com to find my programmer. Dan McKenzie, a good friend and the bass player on my last album, had just bought his developer’s license from Apple for $100. Dan was an English major who taught himself how to program computers and now does it for a living. I was happy to find someone to work with whom I already had a good relationship with. It didn’t hurt that Dan happens to be a genius.

I called Matt Kindt to work up some art for the app; he’s worked with me on all the CDs I’ve released, plus his first graphic novel was chosen by Time magazine as one of the top ten of the year.

None of the Milton apps that I researched were visually interesting, so we were going to make ours look sinister and classy. I bought him a $3 cup of coffee as he showed me some thumbnail sketches, which I loved. Then he agreed to do the art for the app for a small share in future profits.

The text was ready, the art was ready, and Dan had been making a lot of progress. Then somewhere in the chaos of grad school, teaching, testing for my black belt in karate, and hosting a radio show, the app became less important. Dan was working long hours at work, playing in a softball league, and hitting roadblocks coding. Paradise Lost in the Office came to a complete stop.

Then I gave up. Dan and I were drinking PBR’s at Mangia Italiano in the South Grand Neighborhood of St. Louis and I asked him if he wanted to create a different app. I started running down a list of concepts for apps that had nothing do to with John Milton or Paradise Lost. Dan stopped me. He still thought the Paradise Lost in the Office app was the best idea. The next day we went to Barnes and Noble and I bought Programming iOS 4 for about $40. This book helped Dan through the roadblocks. We were making good progress so I sent a press release and story pitch to some editors in the local media. St. Louis Magazine was very good to us with this story: Paradise by the iPhone Lights: St. Louis Poet Jason Braun Creates the Definitive (and First?) John Milton App.

With the end in sight, I began calling Dan each day to check on progress. I did not know he was trying to quit smoking at this time. He called me an asshole. This is the drawback when it comes to partnering up with friends. But a month or so later, the app was stable. We never stop and think about it, but most programs crash at first. The apps and programs that we all have on our computers, tablets, and phones—they all went through many iterations before they made their way to the consumer.

I passed my phone around to friends for the next two weeks for beta testing and made notes on their comments. I passed these and a few other suggestions to Dan. We prepared a new version and were ready to launch when I went to New York for a conference on Para-Academic Publishing. I hoped I could catch up with Al Katkowsky while I was there.

Al did a beta test over a pint while we waited for our food at The Half King in Manhattan. Al said it looked great and asked me how I was going to promote it. I had already drafted a press release and booked a gig at The Firebird, an indie rock club in St. Louis. A month later, at the app release, I was dropping hyper-literate raps with a DJ and a saxophone player behind me, and we had broken into the top 200 downloaded paid business apps and were climbing. “Today,” I said to myself, echoing Ice Cube, “was a good day.”

Jason Braun currently teaches English and is the Associate Editor of Sou’wester at Southern Illinois University Edwardsville. He hosts Literature for the Halibut, a weekly hour-long literary program on KDHX 88.1. He has published fiction and poetry, and has reported for or been featured in The Riverfront Times, The St. Louis Post-Dispatch, ESPN.com, Drum Voices Review, Sou’wester, The Daily Iowan, The Nashville City Paper, and many more. Releasing music under the moniker “Jason and The Beast,” Braun’s most recent project “Made This For You: The Mix Tape as Literature” can be downloaded by naming your own price (even free) at Jasonandthebeast.com.