Note from Jane: Today’s post is an excerpt from Story Fix: Transform Your Novel from Broken to Brilliant by Larry Brooks (Writer’s Digest Books).

A weak concept can be strengthened and saved.

Almost always, the source of weakness and dysfunction within a story dwells in the nature of the concept itself; i.e., the degree, or complete lack, of something compelling within the concept. It’s hard to turn a boring concept into a compelling premise, and yet, this is the golden ring of revision. We need to do precisely that, usually by adding a conceptual layer rather than by looking to the premise to fix the problem.

Concept is a tricky issue.

You could write a novel from this concept: “a story about a guy living alone in a big city.” That actually is a concept, just not a very compelling one. At first there’s nothing interesting or unique about the protagonist, the setting, or the situation. It’s flat, and therefore dead on arrival. You don’t need to chuck it, but you do need to enhance it to save it. Good concepts go beyond the banal to offer something fresh and, most of all, compelling, and this example is nothing if not generic and bland.

A better concept might look like this: “a story about a wealthy widower who suddenly finds himself alone after thirty years of marriage and moves to Los Angeles to live with his younger brother, a film director who enjoys life in the fast lane. The man must negotiate his staid values and comfort level with the onslaught of aggressive, sophisticated women who seem to want to rescue him from his depression.”

To me that sounds like a significantly more compelling story than the first concept. If you don’t agree, then the issue resides with your story sensibility, which is the key variable for what you decide to write.

I encounter this particular concept issue frequently with my coaching clients, and often their response to my feedback is something like, “Well, I intended that. It’s obvious that something else will be in play that complicates his situation.”

It’s not obvious. Never assume an agent, editor, or reader will expand the scope of your concept in his mind because it’s obvious to you. If the juice of your concept is layered, define the layering at square one.

The second example meets several of the criteria for a compelling concept, one of which is this: The reader hasn’t encountered this story before, or if she has, this offers a new and intriguing twist.

The acid test of a compelling concept is simple.

If you pitch your concept—without having to add elements of the premise to make it interesting—and your listener responds, “Wow, now that is interesting. I can’t wait to read a story based on that idea,” then you’ve hit pay dirt. If you received that response, then your concept is, by definition, compelling and intriguing, at least to that particular listener. The trick is to offer something that a stadium full of listeners would respond to in the same way.

The word compelling, however, is a mixed bag.

Reaching for the bar labeled compelling presents an opportunity to add depth and richness to your concept. Yet, “compelling” always remains a matter of opinion. What is compelling to some may be considered trite and ridiculous to others. That’s why we have different genres. Readers of romances may not find the notion of traveling to a different dimension to encounter an alien life force all that compelling. Even if it’s a romance, if you set it in an alternate universe, then it is also something else.

There are no hard and fast guidelines for attaining a “compelling” level of appeal. One agent’s next Hunger Games is another’s been-there-read-that story. For the writer sitting alone in his office, this leaves little to work with other than his instincts. This is why it’s important to develop a cutting-edge, highly market-accurate story sensibility, because without a commercial nose for what masses of readers will find appealing, a writer’s notion of “compelling” may fall short.

The goal of all of this, at its highest level, is to evolve your story sensibility.

You want to be able to look at your existing story concept and say, “Yeah, that’s good,” or admit, “Well, I thought this was cool, and it is cool for me, but I can see now how others might not agree, because the story is nothing special.”

You may like mustard on your peanut butter sandwiches. But good luck trying to launch a chain of sandwich shops based on that concept.

Elevating your story sensibilities becomes the most potent tool of all in the revision of a story. With concept, an idiosyncratic story sensibility shows itself immediately, via the criteria and then via reader reaction to the idea itself. Thus a concept can either make or break your story before you write a word.

Here are some examples of inherently conceptual concepts.

These concepts meet the criteria for a compelling concept without delving into premise. Notice how there are no heroes here, no plots, no actual story. Each of these is an idea for a story that has been imbued with a conceptual layer, which renders it immediately compelling, at least to the market sensibilities of the people you are trying to impress. It may not be your thing, which means you shouldn’t write that story … just as you shouldn’t write it if your story sense tells you that you alone hold affection for it. Some of these have been taken from best-selling stories you might recognize, while some are concepts that promised a story the writer(s) couldn’t quite deliver on.

“Snakes on a plane” (a proposition)

“The world will end in three days.” (a situation)

“What if you could go back in time and reinvent your life?” (a proposition)

“What if the world’s largest spiritual belief system is based on a lie, one that its largest church has been protecting for two thousand years?” (a speculative proposition)

“What if a child is sent to Earth from another planet, is raised by human parents, and grows up with extraordinary superpowers?” (a proposition)

“What if a jealous lover returned from the dead to prevent his surviving lover from moving on with her life?” (a situation)

“What if a fourteen-year-old murder victim narrates the story of her killing and the ensuing investigation from heaven?” (a narrative proposition)

“What if a paranormally gifted child is sent to a secret school for children just like him?” (a paranormal proposition)

“A story set in the deep South in the sixties, focusing on racial tensions and norms” (a cultural arena)

In general, if you can add “hijinks ensue” to the end of your concept, you may be on to something good. If the hijinks themselves lend a conceptual essence to the idea, then include them in your statement of concept.

High concepts depart from the norm. They exist at the extreme edge of imagination and possibility. High concepts are simply more conceptual than more common, real-world concepts. Examples would be Superman and Harry Potter and the Avengers, which bring in fantastical and supernatural elements. Examples of reality-constrained concepts that are equally compelling would be James Bond or Alex Cross or The Help or Gone Girl.

Stories about real people in real situations also benefit from something that creates a compelling context for the story. Something about a hero can be conceptual, or something a character does or believes or must deal with can be conceptual. For example, one of the main characters in Gone Girl conspires to kill herself while framing her husband for her death; this becomes the concept itself.

Notice how all of these examples are different than—more conceptual than—a “story about a guy living alone in a big city.” Nothing about that particular concept is unique or fresh. It doesn’t push buttons; it doesn’t appeal to a given demographic, interest, or fascination; it doesn’t pose an intriguing (at least, intriguing enough) speculative question or proposition; and it doesn’t unfold within a setting, time, or culture that would allow the reader to take an appealing, vicarious trip into such a place.

Great concepts always promise a vicarious ride for the reader. They can take readers somewhere or place them into situations that are not possible, realistic, or even something they would choose in real life. A strong concept takes readers on a ride of a lifetime, one they will never know in their personal reality.

A concept can define the story world itself, creating its rules and boundaries and physics, thus becoming a story landscape. (Example: A story set on the moon is conceptual in its own right.)

In short, a concept is simply the compelling contextual heart of the premise and story built from it. It imbues the story atmosphere with a given presence. It elicits that sought-after response: “Wow, I’ve never seen that before, at least treated in that way. I really want to read the story that deals with these things.”

It does not include a hero … unless the hero is, by definition, a conceptual creation, which is the case in several of the examples just given. A story is built around a protagonist leveraging her conceptual nature. The character isn’t the concept—because every story has a protagonist or hero. What makes her fascinating, and therefore conceptual, is the proposition that renders her unique and appealingly different (think Nancy Drew, Stephanie Plum, or Wonder Woman). When that difference screams for a story to be told, you have a great concept on your hands.

It might be helpful to consider what another story without a vivid concept would sound like in a pitch: Two people fall in love after their divorce. It’s not a bad story if you can pull it off. But divorce is all too familiar and therefore not a strong concept by itself. An agent wouldn’t quickly invite you to send him a draft; he’d want more from the concept, leading into a premise that picks up the conceptual power it offers. If you could bring something contextually fresh to it—for instance, Two people who both want to murder their ex-spouses fall in love—then the story is already strengthened from its conceptual promise alone.

Agents and editors are looking for something fresh and new—in other words, they are looking for the conceptual. Imagine, for instance, that you are an agent and this pitch crosses your desk: “My story is about a detective who is assigned to find the killer of a girl.” This common concept crosses my desk regularly, and my feedback is easy: “There’s nothing here that sets your story apart. You’ve defined the genre itself without adding anything inherently appealing.” You might as well have said, “My story is a by-the-book detective mystery.” 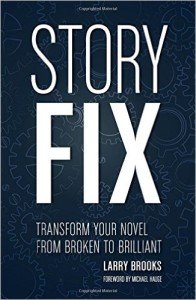 When I say, “Agents and editors are looking for something fresh and new,” it may be tempting to say, “Well, I’m not dealing with them. I’m going directly to readers, so I don’t have to worry about all this fresh concept stuff.” That’s risky thinking. Readers screen titles online, looking for pitches—concepts and premises—that draw them in. It’s the exact same dynamic.

For more story-fixing tips, check out Story Fix: Transform Your Novel from Broken to Brilliant.