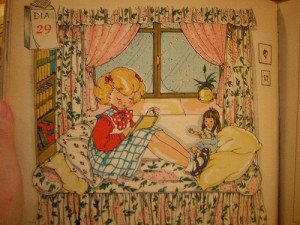 It is a pleasure to bring you this lovely essay from April Line. April is a freelance writer and writing teacher. She lives in north central Pennsylvania. Visit her online at April Line Writing.

The theatrical performance of Max & Ruby: Bunny Party came to my town. I freelance for the arts and culture section of the local rag, and in covering the show, I got to interview Rosemary Wells. I was beside myself.

I hoped maybe some success juju would eke through the phone. I was eager to look inside the mind that penned Ruby, a character who I—as an oldest sister of four—find to be especially sympathetic.

I’m also the mom of a struggling reader and writer. My daughter is 6, in first grade, and she’s barely reading at grade level. Watching her write is painful. I want to share my love of books and writing with her, but she’d really rather play. Outside. In the mud. Or watch action-based TV shows. Like Adventure Time and Avatar: The Last Airbender.

I want her to be who she is, not who I am. So I read to her, and help her with her homework, and ask her to do the work of learning to read, but I encourage her to pursue her own interests. Like this: she will soon be taking karate classes.

By the time I was her age, I would come in from school every day, lie on the couch, and read book after book. I was so eager to put words together that I practiced my penmanship. I chose books over TV early on.

Which brings me to Wells.

Here’s an unedited quote after I asked her if she ever imagined Max & Ruby would be on TV and in theater:

I emphasize this because we are fast entering a world where there is just so much screen time for kids. None of this has really been examined over the years. Whether parents really are making a good decision to allow so much screen time, and whether it’s just a progress in the technology, or if kids are just falling into it because it’s there.

The interview went on with lots of little speeches like that, with which my writer half was in agreement, and my mother half was feeling generalized and persecuted.

I agree that people (not just kids) should read more. That TV watching should be kept at a reasonable level. That there is a scary dearth of critical thinking ability all around me, every day.

But we are also increasingly digitizing media. Printed books are going the way of the wooly mammoth, so according them total responsibility for a child’s brain and spirituality development seems to be problematic.

The publishing industry is changing with such speed that even its executors can’t keep track. Before my first grader is a fifth grader, we will choose from the library of books on her eReader for bedtime literature.

Tablet technology is getting less and less expensive, and computer classes begin in kindergarten. iPads are being used as teaching tools all over the world. This stuff, these screens, are her medium. They will shape an ever-larger portion of her world, like it or not.

And she has absurdly easy has access to so much information. This can’t be a bad thing.

As the interview progressed, I felt the need to defend myself. “I read to my daughter!” I said, almost defensively, as Wells made a blanket statement about parents not reading to their kids.

Wells didn’t even seem to hear me.

“I do voices and everything!” I said.

In the wake of feeling belittled as a mom and affirmed as a writer and reader, I wondered:

What does the digital media revolution mean for children’s books? For children’s literacy? Are we heading down a slippery slope of oatmeal-minded buffoonery as a culture? Is Rosemary Wells just a curmudgeon? How do I navigate this transition as a mom? Do I go out and buy an iPad or a Kindle Fire? Boycott Wells? Cling desperately to my printed books and start buying up copies of all my favorites?

I think I landed somewhere between a self-scrutinizing panic and contempt for Wells’s arcane argument.

In the usually-less-than hour a day my kid spends in front of the boob tube, she’s watching higher quality narratives than I had access to in Avatar: The Last Airbender, with smarter writing in Adventure Time, and a massive variety of animation styles. And Netflix gives me the option to exclude commercials.

I am as excited to see how research happens for my child as I am sad that she won’t spend hours in the dusty stacks, jotting notes on recycled card catalog leaves and learning the Dewey Decimal system.

More than being concerned that my sweet kid will think too little, learn too little, read too little, I’m thrilled that she has access to so much. Now is historical nirvana for writers and readers and critical thinkers. And it’s my job as a mom to show my kid how to take advantage of it, regardless of medium.

April Line's fiction appeared in Sou'Wester in 2005. She currently does copy writing, editing, and freelances for a number of regional publications. She is working on a collection of essays and fiction, and on her nonprofit project, Billtown Blue Lit. She lives in Williamsport, PA.

What an interesting turmoil as a mother and author.  Perhaps it all goes back to finding a balance between helping kids to come into their own yet living a life filled with bits of many wonderful stimuli (e.g., Avatar, reading, internet researching).

As a writing professor, I am a big advocate of educating kids to effectively use the resources available to them, but also having them stay in touch with their creative, reflective sides.

Yes, Heather!  How does one explain peer review (and how Wikipedia’s not) to a 3rd grader?

A friend said once that he is often startled by his son’s inner life.  It is sometimes hard to let that inner life alone!  Especially because I remember so much insecurity in mine!  But you’re right that it’s a balance: when is it helpful to introduce a book over a digital resource?  By what criteria do we approve TV shows, computer games, software/apps?

I’ve had so many of the same thoughts/concerns as I watch my little boy develop a love of books but also of digital media. I am often torn about what is best for kids (and my kid most of all) as I review iPad children’s books.

I wrote about it in March when I was just a few months into reviewing these new digital books: “How will iPad picture books affect young reader’s literacy?” http://digital-storytime.com/wp/?p=114

Thanks for sharing your thoughts!

Thank you for inspiring discourse.  I am excited to read in depth once I have a moment!

[…] Can Children Develop Adequately Without Books? | Jane Friedman What does the digital media revolution mean for children’s books? For children’s literacy? Are we heading down a slippery slope of oatmeal-minded buffoonery as a culture? Source: janefriedman.com […]

Dear April.  I feel you.  I have three intelligent, creative children who were raised on books and yes, some television, computers and now e-readers.  They’re fine.  Very smart, very worldly and very well-read.  My father taught me the following – read to your children from the moment they’re born, and we did.  They love books, but they they also love classic movies, good television and occasionally junk.  So what.  I’m serious…so what.  Mass media Nazis weary me as much as food Nazis.  Unless you want to live in a cave or under the sea, you’d better introduce your children to… Read more »

I totally agree with you.  Nothing (well, almost) makes me angrier than (forgive me smart, thoughtful, carefully socializing) home schoolers!  Kids have to reckon out this big, scary place for themselves.  The sooner they get started, the better adjusted they’re going to be.

I read my girl all kinds of stuff even before she came out.  But you’re right.  Everything’s a trade off.  She likes games (like Monopoly for Kids and Hungry Hungry Hippo) way more than I ever did.  Every brain’s a little diffreent.

Oh Jane – As a mom and author – I HEAR you! I completely understand the dilemma. What I try to remember is the what NOT the how. I want my kids to be happy and fulfilled. Because I love stories -doesn’t mean they have to – although they do. And even if I love stories in books on paper doesn’t mean they have to -b/c as you said “wooly mammoth”. So take your first grader to karate class and enjoy!

Thanks for the encouragement.

I love my iPhone and spend way too much time on Twitter/surfing the web. That being said, I have to disagree when you write, “according [books] total responsibility for a child’s brain and spirituality development seems to be problematic,” and “I’m thrilled that she has access to so much. Now is historical nirvana for writers and readers and critical thinkers.” Are you arguing the more information the better, and that technology is giving us a feast of information? Or that you *must* expose your daughter to the mass of information out there, albeit at a measured pace? Let me propose… Read more »

Hey T.K., It’s not really my aim to argue anything conclusive or to posit that I must handle anything a parrticular way.  I was kind of hoping for more of “let’s think about this,” and “what next?” responses.  Not that I dislike your questions.  I understand them and agree that they should be answered.   So since you ask, I think I’d be remiss if I kept my sweet girl under a rock, or did not allow her access to the medical intervention to which Shakespeare had no access, or did not take measures to keep her safe from threats,… Read more »

Thank you — you make so many great points here. My kids are 5 & 7 and we limit but don’t completely exclude screen time. We’ve always read to them and still do, every day. My oldest is an avid reader and my youngest is learning. Piecing it out. Both of them adore getting caught up in stories (yeah!). They take stories and twist them in their imaginations, making up games and pretend play based on what they read. I will always believe that stories are critical to developing imagination and critical thinking and a sense of self. But stories have… Read more »

I agree that being choosy is the best.  Thanks for the thoughtful comments and for the affirmation.

[…] after my super lucky guest post on Jane Friedman’s Blog, this lovely woman, Jamie Chavez, linked me to a post about her son learning to really love […]

[…] me that will both ask questions about book marketing, and bring folks here, to Billtown Blue Lit.  Here’s a link to the first one she ran on her […]

[…] April Line, a freelance writer and writing teacher. Read her previous guest post for this site, Can Children Develop Adequately Without Books?, and visit her online at April Line […]

[…] What does the digital media revolution mean for children’s books? For children’s literacy? Are we heading down a slippery slope of oatmeal-minded buffoonery as a culture?  […]