I’ve been on both sides of the publishing desk—as an acquiring executive editor for several decades, and as an author. The experience has provided insights that I wouldn’t have had otherwise, and made me more sympathetic to the nerve-wracking process of trying to get your book published.

First, let’s look at the editor’s side. An editor’s career hinges on acquisitions. If she doesn’t acquire eight to ten titles per year, then her job is on the line. So an editor is constantly trying to buy books; but that’s not easy as it sounds. Before the weekly meeting, you have to get at least one other editor to read—and like—the manuscript you’re trying to acquire. Then you have to pitch it to an overworked bunch of colleagues who are also trying to fill limited slots on the next list. Most of all, you have to convince your boss, the editor-in-chief—who may or may not have had time to look over your project in the three hours he spent cramming the night before—that it has merit.

If you pass “Go”, the next hurdle is the acquisitions meeting. There are pro formas to fill out: the profit and loss statements that project how many units the book will sell in all formats over a period of time, and which the sales and marketing directors have to sign off on. At times these P&Ls require wild leaps of imagination.

Books are often dead on arrival at the acquisitions meeting, for the following reasons:

You take a deep breath and call the agent. Who tells you that the book was pre-empted for six figures, two hours ago.

All this is to explain why, as an author, it can be so hard to get your book published. It was extremely difficult even ten years ago, and is even more so now. So if your carefully revised, lyrically titled, wonderfully imagined novel doesn’t sell, please don’t blame the editor. She may have loved your book, but she probably wasn’t allowed to acquire it.

However, this doesn’t mean it’s the end of the road for you as an author. I’ve experienced being published from both sides too: by a traditional publishing house, and now as a self-publisher. I’m going to describe each experience.

My Traditional Publishing Versus My Self-Publishing Experience

My first novel, The Curing Season, was pre-empted by Amy Einhorn (who went on to publish The Help). Amy’s editing was insightful and thoughtful. There wasn’t a suggestion that wasn’t careful and intelligent; I loved the whole process, and felt very lucky. The art director came up with a beautiful, appropriate cover and the publisher sent me on an eight-city tour (back in the day when authors got sent on tours). The book came out during a time when newspapers and magazines were either killing or drastically reducing book coverage; since social media hadn’t happened yet in the early 2000s, it was difficult to garner much attention. The book did receive some very nice reviews, and overall it was a very positive experience.

For my new novel, Come Dancing, I thought it would be interesting to take a different approach. So many of my author friends are choosing to self-publish that after checking out traditional publishing options, I decided to give it a whirl. The process has been exciting, exhausting, and empowering. First, I got the manuscript in the very best shape I could, which took two years. Next I hired a freelance editor to edit the first draft, and later on, a second editor for the third draft. The revision process took place over a year and a half, then I asked a few friends to read the manuscript and comment. Once again, I revised accordingly. When I couldn’t bear to read it one more time, finally I was done.

Now for the fun part: I chose a designer for my cover (the incredibly talented Laura Klynstra, a former colleague), and she came up with an eye-catching jacket. 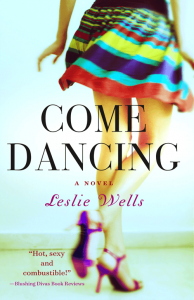 Laura also did the interior design, and let me choose from a selection of typefaces and chapter head ornaments. I went to several online reviewers (whom I did not know) to ask if they would be able to provide early quotes, and two generous people gave me nice blurbs. Then I wrote my own jacket copy. I figured out how to upload the book online (with help from my teenager). And once it was up, I e-mailed every single person I knew and asked them to buy it.

Next I set up a Goodreads giveaway, and I paid for a few inexpensive ads on websites that promote e-books. The most difficult thing for me was figuring out the features of the various retail and promotional websites, since I’m not tech literate.

To my surprise, one week after it was published, Come Dancing hit #13 on Amazon’s Hot New Releases list for Fiction/Humor and made the Amazon Best Seller list. It also hit #1 in the Kindle Store for Romantic Comedy.

It’s early days yet—my book has only been out for two weeks at the time of this writing—but so far, the experience has been amazing. Most authors want a shot at being published by a traditional publisher, and I certainly understand that impulse. But if that doesn’t happen for you, going the indie route can be extremely satisfying.

Leslie Wells left her small Southern town in 1979 for graduate school in New York City. After receiving her Master’s in English Lit, she got her first job in book publishing. She has edited 48 New York Times bestsellers in her over thirty-year career, including thirteen number one New York Times bestsellers. Leslie has worked with numerous internationally known authors, musicians, actors, actresses, television and radio personalities, athletes, and coaches. Leslie blogs about writing tips, New York City, rock and roll, and the 1980s.