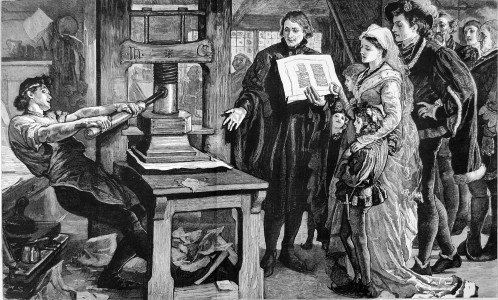 I’ve known about this joke for nearly as long as I’ve worked in book publishing. It goes like this: “More than 80% of people say they have a book inside them. And that’s exactly where it should stay.”

While speaking and tweeting at the International Digital Publishing Forum at BEA this week, I had the opportunity to hear Jane McGonigal speak. (She’s well-known for this TED talk.) She shared this statistic:

More than 90% of young people in the United States say they want to write a book someday.

I tweeted the stat, and while there were some people who considered that inspiring, the more common response looked like this:

That’d be inspiring if more wanted to learn basic grammar and improve their reading skills.

But do they want to READ one?

oh my gosh your followers are very cynical about young people wanting to write books! Wow! (Reading their replies)

Unfortunately, every generation is quite the same in this regard, which is nicely expressed in the following 1900s quotation: “The world is coming to an end. Children no longer obey their parents and every man wants to write a book.” (A Twitter response reminded me of it.) This type of complaint dates back to when the printing press was invented, when many warned that the bad books outnumbered the good.

McGonigal’s talk was meant to inspire publishers to think more imaginatively about how to engage young people in reading—by making the experience match the positive emotions that come from gaming (such as creativity, curiosity, awe and wonder, excitement, surprise, and joy, among others). She emphasized that younger people aren’t interested in passive consumption—they want to engage, respond, create. And this message fits what you’ll hear if you talk to the folks at Wattpad, where 40 million people (predominantly young adults) go to read and write.

I’ve had more than one conversation with adult writers who just don’t understand why anyone would take Wattpad seriously.

But it’s a mistake not to take it seriously. (If you’ve never heard of Wattpad, I encourage you to watch this video to begin to understand it.) It’s where young people are learning to write, in front of a “live” audience if you will, and going on to publish with traditional houses.

Why do we feel the need to place value judgments on how young people read or write? Dare I ask why we believe someone must become a serious reader before it’s okay for them to begin creating/writing? How much reading should be required before you get the green light to write? Doesn’t writing make you a better reader? (I must say at this point that I have never formally studied these issues; if there are educators who can comment intelligently on this, please do.)

What I observe in the reaction:

We are potentially entering a new era—what has been called the Era of Universal Authorship  (see graph below). And one of the tweeted responses did in fact acknowledge this subtext: “That [statistic] is a bit depressing. Not just the competition. That takes away from the notion of writer as identity.”

Exactly. If everyone is a writer, then what makes any particular writer special?

That’s a pretty damn scary thought for the “serious” writers out there—who can also be the ones who cringe at the masses who wish to write or ridicule them for their attempts. If everyone is a writer, and no one is a reader, then who will read us? Who will care about our special snowflake work? Who will put us on a pedestal if everyone else is writing? And won’t the good work get crowded out?

Our culture used to have the same qualms about the spread of literacy. There were elitist objections that books would be misread by unworthy and ignorant readers. We somehow progressed in our thinking, so much so that we’re now erring in the opposite direction. (You can hardly go a week without seeing claims of how important fiction or novel reading is because it increases empathy or some other social good. It’s a tiresome argument that smacks of desperation, but that’s another post for another day.)

In any event: Trying to stop the era of universal authorship is pointless. We’re not going back to a time where we all passively consume media again. Writers who want to be visible or differentiate themselves in the market will have to:

Of course, those two things have been the topic of my blog for a very long time now.