Do free books hurt authors (or publishers, for that matter)? The short answer is no. For the long answer, keep reading. 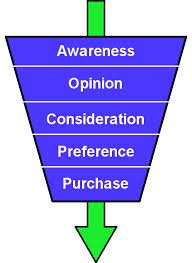 This is the key question that every strategic author needs to ask. The funnel is the path that readers take from becoming aware of you to becoming a fan.

Giveaways (or freebies) are popular for good reason; they’re a classic, frictionless way to make people aware of your work. Just about every industry has some way of using “free” to their advantage, particularly game, software, and app developers. If you can get a sufficient number of people in the door, and they like your stuff, you can sell them other things once you have some kind of trust or relationship in place.

If you’ve seen the famous Alec Baldwin speech in Glengarry Glen Ross—it’s a favorite of mine—it’s the same idea being expressed. A-I-D-A. First, get people’s attention—whether through an ad, a freebie, traditional media coverage, whatever. That creates interest. And if all goes well, you have desire and action to make a purchase later.

I don’t believe that one giveaway leads to an expectation that all of an author’s books will be free. When we get a free cheese cube at the grocery store, we don’t expect to carry away the whole cheese without paying. When we consider ourselves fans of an author, we might expect promotional pricing for buying early, and of course fair pricing in general, but not free stuff forever.

If there is a broader problem with giveaways specifically in the indie author community, it might be that you’re possibly cultivating readers who don’t give a damn about you and are only out for the cheapest read. In other words: giveaways can attract low-quality readers. But they attract high-quality readers, too. This is how business works. Some leads will be good. Other leads will be bad. Business savvy authors learn over time how and where to use the giveaway incentive to increase the high-quality leads and reduce the low-quality leads.

When I recently interviewed Richard Nash, we discussed how every author has a demand curve. Here’s what he said:

Certain activities you engage in, you may do for free, and certain activities you engage in are going to be very, very expensive. It’s free to walk into the Prada store at Broadway and Prince, but it is extremely expensive to buy a dress. It is less expensive to buy cufflinks or a blouse. It tends to be that most people who go in there buy nothing—which is also true of the Apple store.

Take the novelist and poet Jim Harrison. … I know Grove is always trying to figure out, “How are we going to sell more Jim Harrison copies?” And the answer is: it is really f—g hard to bend a demand curve for somebody who’s been in the culture for thirty years. [You can’t expect] some deus ex machina to descend [and move] the point along the demand curve for Jim Harrison-ness—where there are 20,000 people who want to engage for $15—to where there are suddenly 40,000 people who want to engage.

If Jim Harrison picked a bottle of wine for you to drink while reading the beginning of his next book, you could get one of those wooden unvarnished boxes, stick the signed hardcover of the book and a little explanatory note from Jim in there, and sell each one of them for three hundred dollars, easy.

You can also have a 99-cent download, and you’re going to get more people to read him. Are you going to cannibalize a little bit of paperback sale? I don’t think so at all, actually. Even if [you do], from a revenue standpoint and from a readership standpoint, both numbers have gone way up.

I’ve been trying to advocate for this with publishers for years, but basically they just don’t seem able to handle it—not at scale. On an ad-hoc basis, you’ll see a few publishers trying a few things.

Fortunately, where publishers mostly fail, indie authors can excel. (And startups and online-based entrepreneurs have figured this all out, by the way.)

The giveaway is one of the more powerful tools in the new author’s arsenal because it’s a way to get attention when you may not have anything else going for you. There is no demand curve for you yet. And especially if you have no publisher backing you, then it’s important to provide social proof to potential readers, or have some way of indicating merit before they’ll invest time or money. (Thus the race for reviews, social media presences, etc—anything that indicates your work deserves attention.)

But should established authors do giveaways? The “permafree” strategy is well-documented as an effective marketing tool—which means you make the first book in a series permanently available for free, as a gateway drug to the rest of your work.

Where I think indie authors run into trouble is when they only have 1 or 2 books to sell, and they have nothing else to offer readers—and even worse, they don’t establish any means to contact the reader in the future (via e-mail newsletter or social media). So there is no funnel or path for readers to follow. It is a dead-end road. The potential fan finishes the book, and then … you lose them. Maybe they’ll find your next book, if and when it comes, maybe not.

The other catch here is that your work has to have quality that matches the expectations of your audience. If it doesn’t, no amount of giveaways help. When the cheese tastes bad, you stop taking the samples.

What About Traditional Publishers?

As Nash points out, some are better than others in thinking more strategically about an author’s demand curve. They occasionally use the power of the giveaway, but more often they use the power of deep discounting. (Some have started their own versions of BookBub!) I do recall one notable experiment when Suze Orman’s newest book was given away in PDF format, right before its official release, in conjunction with an appearance and announcement on Oprah. The next week, the print edition hit the bestseller lists.

Also, while I was at Digital Book World, subscription services were discussed as a way to increase discoverability for authors’ backlist, and to get new attention for old books—an opportunity to build a pipeline of fans.

Giveaways can be an effective part of a larger content and marketing strategy. Don’t use them without considering your funnel, as well as your demand curve. If you have fans who value your work, they aren’t seeking everything for free—and in fact once you have a fanbase, they’ll be looking for experiences that are much better than a free book. Kevin Kelly commented at length about all the ways you can deliver something that makes it a delight for people to hand over their money.

Rather than pointing the finger at a community that you believe doesn’t value your hard work, ask yourself why what you’re offering doesn’t seem worth paying for. People don’t pay more for something because of a rational explanation (or an abstract complaint that culture costs money). They pay for something because they believe in it.

And if you haven’t seen the Alec Baldwin speech, here you go. (Language not safe for work.)