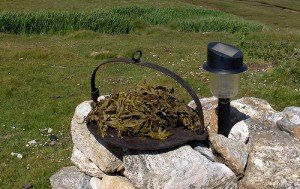 Upon arrival at the Irish farm in Kilgarvan, a bottle of homemade bog myrtle beer was waiting in the kitchen, as a welcoming gift.

Apparently, bog myrtle leaves were used to flavor beer before hops became popular in Britain, and they are still used as a flavoring agent in Swedish spirits. (Bog myrtle leaves pictured above, courtesy of tigerlillith.)

For those with access to bog myrtle leaves, the recipe:

Put leaves, sugar, and lemon in bowl. Pour on boiling water. Allow to cool. When tepid, float a piece of toast on the surface and sprinkle yeast on the toast. Leave for 24 hours. Remove the toast and strain liquid into bottles. You can keep the beer for a while or drink at once. Watch out for popping corks if you bottle immediately.

If you prefer a sweeter drink, make a syrup with equal volumes of water and sugar. Heat until sugar dissolves then cool before adding to beer. If you like a spicy beer, add a teaspoonful of ground ginger to the syrup while heating.

You can also make a double quantity of the beer in a plastic bucket. Double the sugar and water in this case, but not the lemon, nor yeast.

Also, I got my hands on the real-deal recipe for Irish coffee, as follows:

Pre-warm a stemmed glass. Add the whisky. Add the sugar and stir in the coffee. Float the whipped cream on top. Allow the cream to sit, do not stir!