Today’s post is an excerpt from Troubleshooting Your Novel by Steven James (@readstevenjames), from Writer’s Digest Books.

A game of billiards begins with the cue ball striking the racked balls, which then scatter across the pool table. After that, the players take turns trying to clear the table by pocketing another ball (either stripes or solids), all while keeping the cue ball out of the pockets.

We all understand that the game must start somehow. Normally that happens when one player hits that cue ball to break the triangle of racked balls. And from then on, every time a ball hits another, that contact results in an effect.

It’s the same with a story.

One opening event causes things to splinter apart for the main character in your novel. After that, there’s a chain of events that are all linked and caused by the ones that precede them.

A story moves from choice to consequences, from stimulus to response, from cause to effect. This happens on the macro-level, as the results of each scene set the stage for the next, and on the micro-level, as every action and every line of dialogue affects what comes next.

Cause: One ball strikes another.

Effect: That ball rolls across the table.

An event’s effect on a character should be immediately evident to readers. Even if the character is trying to ignore or repress a response, he’ll be impacted somehow. He must be. If he isn’t, readers will lose trust in the story’s believability.

If you have to explain why something just happened, you’re telling the story backward.

Causality is closely related to believability and flow. If an event has no cause, readers will find the scene unbelievable. If there isn’t a strong enough stimulus to cause a certain event, it’ll seem contrived.

Neither unbelievable nor contrived events serve your readers or the story.

When you write a scene that doesn’t follow from cause to effect, you create a gap that requires readers to ask, “But why didn’t he …?” and requires you to explain what just happened.

And most of the time, that’s the opposite of what you want.

If a story moves from effect to cause, rather than from cause to effect, the flow will be disrupted. For example:

Reggie crossed through the kitchen and opened the cupboard. He was starving and wanted some canned ravioli.

Note how action occurs (Reggie crossed through the kitchen and opened the cupboard), and then an explanation is given for why it happened (he was starving and wanted some ravioli). This is backward. Rather than driving the story forward, the movement of the narrative stops as the author backtracks to explain. The sequence would be better cast like this:

Reggie was starving and wanted some canned ravioli. He crossed through the kitchen and opened the cupboard.

Here, action moves from cause to effect. There’s no need to explain afterward why Reggie opened the cupboard. The narrative flows naturally. Too often, novelists show an event and then explain why it happened. This disrupts the pace and disorients readers. Unless you have an overwhelming contextual reason to reverse the order, show the action and then the result—in that order.

Here’s another example of how not to do it:

Suzanne stepped into the shower. She needed to relax. As the water washed over her, she thought of the time she nearly drowned when she was nine. She let the water rinse across her skin. Finally, shuddering, she hastily toweled herself dry after turning off the faucet, and tried not to think about that traumatic day at the lake.

As it stands, most of the events in this paragraph happen out of order and sometimes inexplicably. (For instance, Suzanne remains in the shower instead of leaving it right away when the painful memory returns.)

Suzanne needed to relax, so she stepped into the shower. She let the water rinse over her, but it made her think of the time she nearly drowned when she was nine. Shuddering, she turned off the faucet and hastily toweled herself dry, trying not to think about that traumatic day at the lake.

Written in this way, no follow-up explanations are needed for why she does what she does. The actions make sense and move the story forward, and readers don’t have to ask why things are happening.

Study your story. Can readers see how one ball affects the movement of the others? If not, try reversing the order of events so they string together causally. Move the narrative forward, action to reaction, rather than action to explanation.

Does everything in a story have to be connected?

Unless your novel centers on the absurdity of life, every subsequent event (after the initiating one) should follow naturally and logically, otherwise the story won’t be cohesive.

If you enjoyed this post, I highly recommend Steven James’ book Troubleshooting Your Novel. 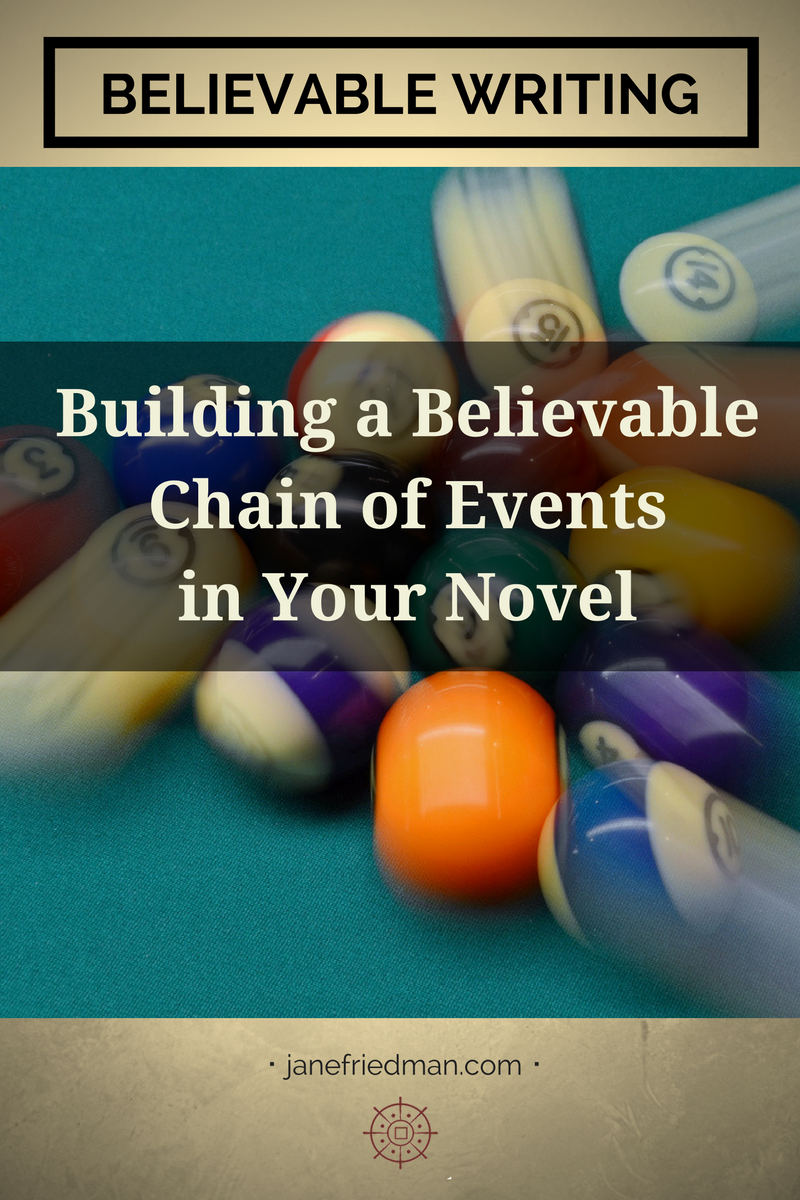 Steven James is a national bestselling novelist whose award-winning, pulse-pounding thrillers continue to gain wide critical acclaim and a growing fan base. Suspense Magazine, who named Steven’s book THE BISHOP their Book of the Year, says that he “sets the new standard in suspense writing.” Publishers Weekly calls him a “master storyteller at the peak of his game.” And RT Book Reviews promises, “the nail-biting suspense will rivet you.”