You’ve probably heard the adage that you must begin your novel with action—even if it’s not the main action of the book. While this rule is fairly well-accepted in fiction teaching circles, not everyone agrees with it.

What does it mean to begin a novel with action? Usually, car chases and explosions come to mind. But a lot of novels don’t have a single car chase and nary an explosion in the whole book, so then what would “action” constitute? It could be a ballgame, an argument, a stage performance, someone’s death, or a mysterious discovery. So long as it strikes the right tone for the novel to come, any of these would be good choices.

But what if the writer doesn’t want to begin with anything active happening at all? Must a novel begin with action of some sort? Is there no other option?

We know there are great ways to begin a novel that are not action by almost anyone’s definition.

Happy families are all alike; every unhappy family is unhappy in its own way.

You don’t know about me without you have read a book by the name of The Adventures of Tom Sawyer; but that ain’t no matter.

It is a truth universally acknowledged, that a single man in possession of a good fortune, must be in want of a wife.

Granted, those are just opening lines, not opening scenes, and those are drawn from novels of yesteryear. But the point remains that it’s possible to have a great novel that doesn’t begin with a tank blowing up.

My fourth novel begins with the hero finding out that he’s been assigned to kill someone—but the scene itself consists mainly of thinking and talking, not your typical description of an action-packed beginning.

Why It’s Often Smart to Begin with Action

Those who advocate beginning a novel with action want your reader to be immediately engaged in your book. The boring beginning, they argue, could prevent your reader from becoming your reader at all. Sometimes I’ll read a book’s first page—or even just its first line—to see if it hooks me, and if it doesn’t, I put it down and keep looking.

Would you keep reading a novel that began like this:

Ruth had already gone upstairs twice that morning to try to wake Johanna. Both times her sister had grumbled something that led her to believe—wrongly, as it turned out—that she really was going to get up. Why do I always fall for it, every single day, Ruth scolded herself as she climbed the stairs for the third time.

Now, this is the beginning of The Glassblower by Petra Durst-Benning, and on the day I wrote this, it was the No. 1 book in Amazon’s historical romance category, so apparently it was selling just fine.

But I personally wouldn’t keep reading it, and not just because I’m not a fan of romance novels. It’s just boring to me. It feels mundane, safe, and even tedious, which is what my life too often feels like as it is. I don’t come to fiction for more of that. There’s nothing of danger or intrigue here. I would just keep looking.

Would you continue reading a novel that begins like this next one:

It was a pleasure to burn.

It was a special pleasure to see things eaten, to see things blackened and changed. With the brass nozzle in his fists, with this great python spitting its venomous kerosene upon the world, the blood pounded in his head, and his hands were the hands of some amazing conductor playing all the symphonies of blazing and burning to bring down the atters and charcoal ruins of history.

Wow. Well, I personally would keep reading that. It has both action and surprise, both danger and the unexpected. I wonder what in the world is going on, and I feel my brain perk up with all its information about staying safe when around open flame. Apparently, readers have been able to stick with this book fairly well over the years. It’s the opening of Fahrenheit 451 by Ray Bradbury.

Give your reader danger, action or surprise in the beginning, and he’ll have a hard time not sticking with your book.

Agents and editors are like that, too. They may have 63 other proposals they’re trying to get through before lunch, and if a novel doesn’t grab them right away, they lay it aside and move on to the next one in the stack. Even if the first line or two grabs him, when an agent or editor sees a novel that begins with someone thinking or a description of the clouds or a massive information dump about the history of something, he knows the odds are this book isn’t a winner.

Readers want to be swept away by a novel. Unless a novel has been recommended strongly by people they trust—or written by someone they’re related to—they’re not going to give that novel much of their time if it doesn’t grab them right away. Starting with action is the most surefire way to engage. The other way to engage is to begin with something unexpected or fascinating happening. But it’s in your best interest to begin with either action or surprise—or both.

How Do You Engage the Reader from the Beginning?

I don’t see any question that the very first line, paragraph, page, scene, and chapter of a novel must engage the reader. She’s got a hundred other things she could be doing and a billion other entertainment choices vying for her attention. My great commandment of fiction is that you must engage your reader from beginning to end. Well, how can you engage the reader at the beginning?

Seriously, though, you’ll find 101 ways to engage someone in a story you want to tell. You can engage through pyrotechnics or poetry, through mayhem or music, through action or anguish. Yes, a car chase or explosion might be engaging, but so might the consumption of a peanut butter and jelly sandwich, if written well enough.

The point isn’t what sort of engagement you use. The point is that you engage. 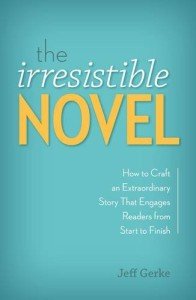 If starting with traditional action fits your novel and engages the reader, do it. If starting with nontraditional action, like cracking a safe or finding the last Easter egg, fits your book and engages your reader, it’s all good. And if you can pull off an opening that doesn’t have action by any definition and yet nevertheless fits your novel and truly engages the reader, then you should do it.

I have begun some of my novels with action, some with nontraditional action, one with a discovery, one with a cryptic discussion, and one with a decision.

In my opinion, the point isn’t to begin with action, but to engage. However you feel like accomplishing that, either through action or surprise, so long as you do accomplish it, I’d call it a win.

To learn more about engaging your reader, check out The Irresistible Novel by Jeff Gerke, recently released by Writer’s Digest Books.

Jeff Gerke, the author behind the Operation: Firebrand trilogy of military thrillers, is also a freelance mentor and editor for writers. Learn more at his website.