Note from Jane: Today’s guest post is from Joanna Penn (@thecreativepenn), and is based on her new book, Business for Authors: How to Be an Author Entrepreneur, out now in ebook, print and audio.

During the last five years, I have seen a major shift in the publishing arena because of emergent technology and a changing economic situation. We’ve seen:

But on a day-to-day basis, it’s easy to get caught up in this month, in this year, focusing on how we can make money from one book right now. After all, we’re still enmeshed in a publishing industry and media obsessed with the gatekeepers and the traditional model of scarcity.

But here are three trends that mean this revolution has only just begun. These are not new ideas, but it’s time that authors embraced them as creative entrepreneurs.

One of the reasons I love traveling is that it reminds me of how insignificant I am on the face of the earth. It puts my life in perspective, reminding me to live each day to the full.

But it also excites me from a business viewpoint because there are readers everywhere. Walk along a street in New York, London, Tokyo, Lagos, or Delhi and you will see potential readers. People are people, regardless of where they live—they want education, entertainment and inspiration—and perhaps your book is the right one for them. Perhaps your book will change their life, touch their heart, or just give them some escape for a few hours.

Focusing on the US market alone is limiting. Indie authors can now sell their books in over 170 countries through online distributors like Amazon KDP, iBooks, Kobo and Nook, and it is free to self-publish on those platforms. I have sold books in 58 countries, in four languages and in ebook, print and audiobook formats. When I sold an ebook in Burkina Faso through Kobo, I was delighted. Most people would struggle to find the little African country on a map, but someone there found my book and (hopefully) read it.

Authors writing in English have a great advantage, but the market for ebooks in other languages is growing every day. Authors can also now collaborate with entrepreneurial translators in joint ventures to reach even more people. (Note from Jane: BabelCube is an emerging online market that helps connect authors and translators; also see last week’s post from Beate Boeker on finding German translators.)

Global sales are not restricted to ebooks either. Digital publishing incorporates print-on-demand as well as audiobooks and ebooks in multiple formats. It can mean hardback special editions, photo books, children’s books with special binding and illustrations, as well as good quality, but basically disposable, paperbacks. Print-on-demand (POD) means that authors can compete by selling physical books and products, as production and shipping can be done by companies that specialize in POD technology. We don’t need to print or hold stock; all of my books are available in print, and I don’t have any of them in my house.

In a similar way, audiobooks used to be constrained by physical media, but can now be instantly sold and downloaded anywhere. I sell my fiction through Audible/ACX.com and my nonfiction audiobooks direct from my website.

While extensive press has been devoted to the demise of stand-alone e-reading devices, the rise of tablets and smartphones continues. I’m one of those super book consumers, reading three to five books a week, and I was one of the first people in Australia to buy the international Kindle in 2009. Moving to digital allowed me to ramp up my reading dramatically.

I live in London with no car, so I spend a lot of time on public transport, where I read on mobile or tablet devices. I also live in a one-bedroom apartment and I don’t have the space for physical books. I buy knowledge, entertainment and inspiration when I buy a book, not a physical object.

I’m not alone in my choice of reading device or my attitude to digital. You may not read in the way that I do, but people who live in highly populated urban spaces, in smaller living quarters, are a growing percentage of the population. If the shift in consumption is toward mobile devices, then author-entrepreneurs can compete just as well as big publishers.

3. Think direct: the rise of indie and artisanal.

I love the term “indie author,” as it resonates with the same energy as indie film and indie music: artists who create without big labels, who are perceived as more original than the blockbuster names. The shopping public are moving toward supporting artists directly, frequenting farmers’ markets, funding Kickstarter projects, and buying direct from craftspeople online.

There’s been a renaissance in people shopping for artisan-made goods, crafted with care in smaller batches. People want to shop from those who care enough to dedicate their time to making beautiful things, true artisans who put their heart and their story into their work. Guy Kawasaki coined the term “artisanal publishing” in his book Author, Publisher, Entrepreneur, and it’s a phrase that also resonates with indies because it implies creative freedom and dedication to quality on a small scale.

For my book Desecration, the print edition contains interior designs from an artist in the Netherlands who I found through Pinterest. I drink in bars in London where they serve strangely named beers from micro-breweries, only available locally.

This “think local” attitude is spreading, and people like to buy direct from artists. More authors sell books directly from their sites—whether that’s signed print books, or direct ebook or audiobook downloads. It’s not a new phenomenon for nonfiction authors to sell PDF ebooks and courses directly, but it is a shift to see fiction authors selling DRM-free ebooks from their sites instead of directing customers to the retail stores.

With this pace of change, what will the next five years bring? The next ten? If you sell your rights now, if you settle for a deal where you no longer have control of your creative work, what will you miss out on over the next period of change? 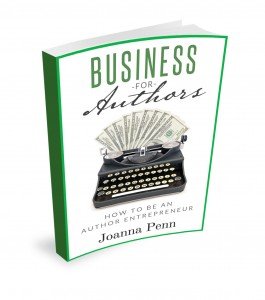 Note from Jane: Joanna’s new book, Business for Authors: How to be an Author Entrepreneur, is out now in ebook, print and audio.

Joanna Penn is an author, speaker and entrepreneur, voted as one of the Guardian UK Top 100 creative professionals 2013. Her website, TheCreativePenn.com is regularly voted one of the top sites for authors and self-publishers. Writing as J.F.Penn, Joanna is also a New York Times and USA Today bestselling thriller author. Connect on Twitter @thecreativepenn.