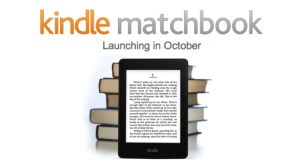 When Amazon announced their Kindle MatchBook program earlier this month, I’m sure I’m not the only person who thought, “It’s about time!”

For the past three years, I’ve watched the industry numbers, and the continuing erosion of print book sales has me worried about the future of print. To me the solution has been obvious: Provide a free ebook for anyone who purchases a print edition. I knew it would be Amazon or Barnes & Noble who would adopt this first (my money was on Amazon as they tend to be more proactive).

So it was with exuberance—but then immediate frustration—that I read the announcement, because I realized that for most of my titles, it probably won’t make a difference. It will be up to my publisher (an imprint of Hachette Book Group) to ultimately determine if this feature is implemented for my titles.

Luckily, I’m in control of the ebook rights for my most recent title, Hollow World. I sold the print rights to Tachyon Publications, the audio book rights to Recorded Books, and I kept the ebook and subsidiary rights. My plan was, and is, to provide all the popular ebook formats in DRM-free files to anyone who e-mails me a copy of their receipt. Now, because of MatchBook, I’ll have far fewer requests to process, as I’ve enrolled it and set the price to free. But I’m going beyond MatchBook by making free ebooks available no matter where the print book is purchased. This will give independent bookstores and the remaining chains such as Barnes & Noble or Books-a-Million a fighting chance against Amazon.

What makes such a program possible is the “print-only deal” which is all so rare in today’s current publishing environment. The only authors that I’m aware of who have signed such deals are Bella Andre, Coleen Hoover, Hugh Howey, Brandon Sanderson (for his novellas Legion & The Emperor’s Soul), and myself. Three of those five are New York Times bestsellers with more than a million books sold. The fourth is from an author with more than 600,000 sales and a movie deal with Ridley Scott. The fact that I (a solid mid-list author) have been able to secure print-only is encouragement that these deals are working their way more broadly into publishing, but I still think these types of contracts will be few and far between.

But there is another alternative—if publishers would permit their authors the right to distribute (not sell) ebooks with proof-of-print-book purchase, then we can provide this capability to all print purchases, regardless of the venue they were bought in. Even publishers who don’t want to enroll all their titles into Kindle MatchBook can selectively try out programs on a book-by-book or author-by-author basis. I see this as a win-win for all parties involved.

For those publishers who are afraid this would hurt their sales, I’d like to offer up Angry Robot, who ran a pilot program in August 2012 with a number of independent bookstores, as an example. They saw their sales triple and have now officially rolled out their Clonefiles program in the United Kingdom and will soon be expanding it to the United States.

The music industry already provides for downloads when purchasing CDs or vinyl albums. DVDs bundle high-definition and standard resolution copies. So it just makes sense that the book industry should get on board and provide both print and ebooks together. To create the infrastructures for publishers and sales venues to do this themselves would be a herculean task, but it could be easily implemented by allowing the author to shoulder the burden. All that would be required is a simple contract addendum.

Will all authors be willing to take on the burden of sending emails? Of course not, but for those that do feel strongly enough to provide such a service to their readers, it seems like a reasonable way to bring this feature about not in six months, or a year or two years, but now.

Until such a program exists, I’ll continue doing it myself and hope that it catches on with other authors who control their ebook rights. It’s the right thing to do, and I firmly believe that the authors and publishers that put the readers’ wishes first will be the ones that continue to thrive even as the industry continues its rapid and turbulent change.

Michael J. Sullivan has published through all three routes: small press, self publishing, and big-six. His Riyria Revelations has sold more than 340,000 English language copies and has been translated into 15 other languages. His Hollow World Kickstarter campaign raised more than $31,000, making it the highest-earning individual novel in the fiction category at its closing.