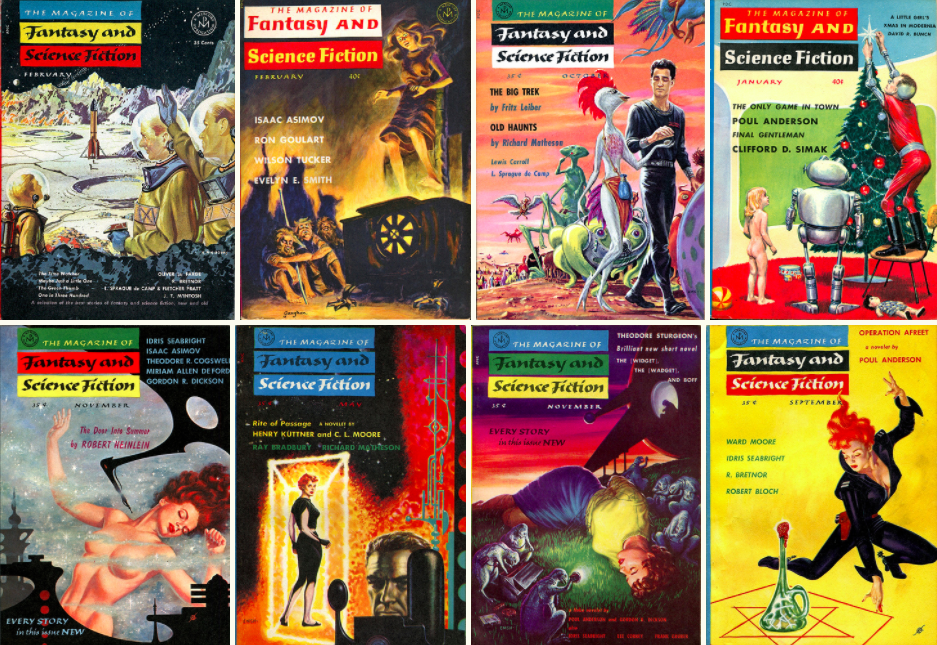 George R.R. Martin says, “Fantasy is silver and scarlet, indigo and azure, obsidian veined with gold and lapis lazuli. Reality is plywood and plastic, done up in mud brown and olive drab.”

While fairy tales are ancient, dating back to the Bronze age, fantasy turns out to be a revival movement, rising from the grave of the recent dead. Mention of the word fantasy is minimal through through the twentieth century, with some peaks here and there depending on your source. Around 1945, fantasy took flight, soaring up and up, well into the twenty-first century. Why the change? What summoned the word fantasy back to life in 1945?

The first people I called on for an answer was my house painter, Rob Cordones, who was then painting my kitchen (lemon). He replied instantly to the question, “Edgar Allan Poe.” He then quoted him, “All that we see or seem is but a dream within a dream.” He added Mary Shelly (Frankenstein) and Bram Stoker (Dracula) to the list, all of whom wrote well before there was much mention of the word fantasy. Poe was dead by 1849, Shelly by 1851, and Stoker made it into the twentieth century, dying in 1912. Still, fantasy had a stake through the chest for another 35 years.

I put the question to Jane Friedman; her answer: “That sounds like a mystery worth chasing,” she said. “I wonder if Tolkien might’ve had something to do with it?” J.R.R. Tolkien hit the sweet spot all right. He and C.S. Lewis were members of a writers group called the Inklings, which met for nearly twenty years. The Lord of the Rings took 12 years to complete, not reaching print until 1949. The Hobbit published in 1937 might have served as kindling.

Ian J. Simpson, a brilliant Brit who’s known as the “Librarian” at the protean site known as the Geek Syndicate, says, “I suspect the term fantasy rose after World War II in part due to an increased optimism and need for release from the horrors of that time,” he wrote. “However, I’m thinking you could also attribute it to the publication of the Magazine of Fantasy and Science Fiction, first published in 1949. And then there was the publication and popularity of The Lion, the Witch and the Wardrobe (1950) and Lord of the Rings (1954).”

Simpson is spot on. The word fantasy does not appear in the English language used as a word for “a genre of literary compositions,” according to the Oxford English Dictionary, until 1949. And its first usage as such appeared in a title: The Magazine of Fantasy and Science Fiction. Added up, fantasy’s sudden growth in popularity was born of talent and terror in the 1940s, and specifically, I would argue, from singular event.

I’ve been haunted by it for many years by an introductory line from a five-time Emmy Award winning two-season HBO series, Carnivàle. Airing from 2003 to 2005, its story arc connected a dust-bowl depression narrative to an epic battle between good and evil. What stirred me was the show’s prologue, which opens on a very tight shot of the dimly lit visage of Samson, a lead character played by Michael J. Anderson. Samson is a little person who manages the carnival, and he has his own theory of fantasy. As he lifts his gaze to the camera in the show’s opening seconds, he grows oracular. His lips move before he speaks, and he slowly pronounces his lines, his voice like gravel stirred into sentences: “Before the beginning,” he intones, “after the great war between heaven and hell, God created the Earth and gave dominion over it to the crafty ape he called man. In each generation was born a creature of light and a creature of darkness, and great armies would clash by night in an ancient war between good and evil.” Samson tilts his head sadly, takes a pause, and tells us. “There was magic then… nobility… and unimaginable cruelty. So it was until the day when a false sun exploded over Trinity and man forever traded away wonder for reason.”

Trinity was the name of the first atomic blast, a second sun described then as a “cosmic light” that rose over ground zero at Alamogordo, New Mexico, in a valley called Jornada del Muerto (“Journey of the Dead Man”). This other sun was visible for 180 miles. But Samson, I fear, missed a beat. Humans did not trade away wonder for reason in that awesome moment. Reason is a good thing and in short supply. The opposite is true. At 5:30 a.m. on July 16, 1945, reason evaporated in a fireball as hot as the stars and rose into an iconic mushroom cloud requiring shelter, beneath the wings of fantasy.

Jeff Shear is the author of The Keys to the Kingdom, an investigation into a weapons deal between the US and Japan (the FSX), published by Doubleday. He has been a Fellow at The Center for Public Integrity, in Washington, DC, where he was one of the several contributors to the book The Buying of the Congress, published by Avon. Before that, he served as a staff correspondent for National Journal, with regular venues at the White House and Congress. He has written TV narrations for the National Geographic Channel, Discovery, and The History Channel. His latest novel is the third in his Jackson Guild espionage series, Black Mesa: The Final Report. The fourth book will appear in June, Decline to Die.