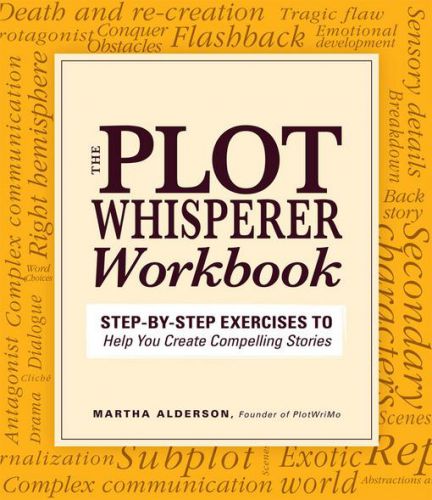 Today’s post is excerpted from The Plot Whisperer Workbook (Adams Media, 2012) by Martha Alderson. Two lucky commenters were chosen to receive a free copy of the book: Tanette Smith and Mindy Halleck. Congratulations!

In a scene, a character acts and reacts to people, places, and events. In this respect, scenes are the basic building blocks of your story. But, as with any structure, if you have the wrong scenes or if they’re assembled incorrectly, your story can—unexpectedly—collapse.

As a pre-writing exercise, it’s helpful to generate and analyze scenes for your story. If you have a draft of your story, use the scenes you’ve written. If you haven’t finished a draft, use what you have and generate the rest. It may also be helpful for you to try the exercise using scenes from a beloved book or story.

If you have no scene ideas, consider what your character wants and then visualize the steps the character will take to get what she wants. Imagine scenes that show her thwarted at every turn.

When generating a scene list, do not concern yourself with the specific elements in each scene. Simply generate scenes that show your main character moving forward for a specific purpose and the challenges she faces along the way. Resist the temptation to write the story as part of this exercise.

It’s also helpful if you give a very brief title to each scene—no more than one line. If your book is made up of many small chapters, each one encapsulating a scene, list events in the story by chapter.

The trick to this exercise is not to see how many scenes you can list. Instead, you want to identify and list scenes that advance the story on a multitude of plot levels. When you find a scene that does not advance the story, you probably need to cut it. More on that below.

The Seven Essential Elements of Scene

Whether you write short stories, novels, or memoirs and/or creative nonfiction, you will write countless scenes. Keep in mind the following elements when creating a scene. Just as plot has many different layers, every scene has layers of functions, too.

The Plot Whisperer Workbook is full of hands-on exercises and worksheets geared toward anyone writing a narrative work. Find out more at Amazon.