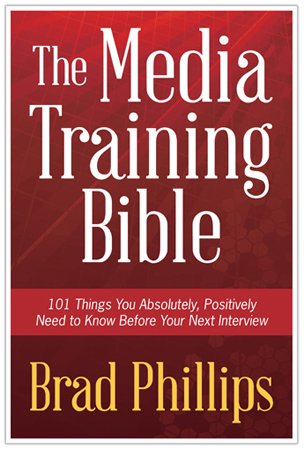 Today’s guest post is from Brad Phillips (@MrMediaTraining), author of The Media Training Bible: 101 Things You Absolutely, Positively Need to Know Before Your Next Interview.

1. They give long answers.

Short answers allow the host to ask another question, take another phone call, or go to commercial—so keep your answers to 30 seconds or less. Finish your answer with a declarative sentence that ends on a vocal downtick to make it clear to the host that you’ve completed your answer.

WTOP once had a regular guest on from The Hill newspaper. Every interview went three minutes long and was exactly one question long. He went on and on, never stopping, never pausing, never letting our anchor get in a follow-up question. Eventually, we dropped him as a guest. We were no longer willing to put up with three-minute answers that would have been five minutes had we not cut him off.

2. They give complex answers.

Your goal is not to tell the audience everything you know about a topic. Ashe compares wonky guests to his undergraduate organic chemistry teacher:

He could not present the material in a way that was easy to understand; it felt like he was speaking a foreign language. He couldn’t explain difficult concepts in simple terms that connected to our everyday lives. If you’re like my organic chemistry teacher, you will not be successful in radio.

Radio requires energy. Too many guests put a premium on the quality of their information but not nearly enough on their delivery of it. Great information is vital but isn’t sufficient on its own. As Ashe says:

Who wants to listen to someone who is putting them to sleep? Nobody. To win on radio, you must be memorable.

Ashe reminds radio guests not only to articulate the problem but also to offer solutions. If your attitude is that there are no solutions, people will tune out.

5. They leave their humor behind.

Some radio formats are lighter than others, but almost nothing is worse for a humorous host than a guest who refuses to play along. Bob Andelman, host of Mr. Media Interviews, says, “Little is worse than if I make a joke and there’s silence.” Unless humor is inappropriate for your topic, bring your sense of humor to an interview. That doesn’t mean you have to be a comedian—it just means you have to be willing to play along.

7 Ways to Rock Your Next Radio Interview

I’ve done hundreds of radio interviews throughout my career. They seem simple. After all, you just pick up a phone or visit a studio and have a conversation with the host. But radio interviews are nothing like normal conversations (unless your friends take listener phone calls and go to commercial breaks!). Remember these seven rules for your next radio interview:

For more advice on how to handle any kind of interview, check out The Media Training Bible.

Brad Phillips (@MrMediaTraining) is the president of Phillips Media Relations, a media and presentation training firm with offices in New York City and Washington, DC. Mr. Phillips has trained thousands of media spokespersons, including hundreds of top-level executives, including corporate CEOs, presidents of nonprofit organizations and trade associations, and directors of government agencies. Mr. Phillips writes the world’s most-visited media training website, Mr. Media Training, and is a weekly contributor to Politco’s “The Arena.” He also contributes regularly to Ragan’s PR Daily and Bulldog Reporter, two of the world’s most popular public relations websites.