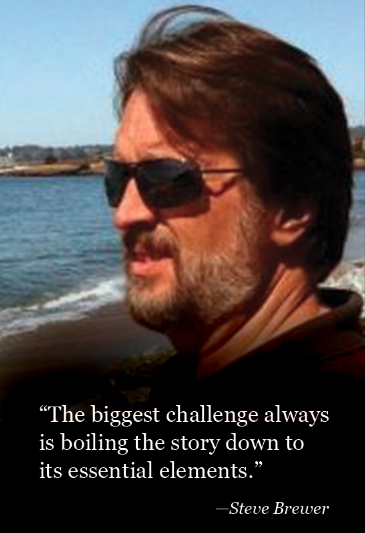 In this 5 On interview, Steve Brewer discusses the highly coveted experience of having a book adapted to film, his personal writing and editing challenges, the tricky experience of using a pen name, and more.

Steve Brewer (@BrewerRules) is the author of more than twenty-five books, including the Bubba Mabry mysteries and the recent comic crime novels A Box of Pandoras and Lost Vegas. The first Bubba book, Lonely Street, was made into a 2009 Hollywood comedy starring Robert Patrick, Jay Mohr, and Joe Mantegna. In 2013, Random House imprint Alibi announced a three-book deal with Brewer. The trilogy is published under his pen name, Max Austin, and started in April 2014 with Duke City Split. The latest, Duke City Desperado, published in June 2015.

Brewer teaches part-time in the Honors College at the University of New Mexico. He’s taught classes at the Midwest Writers Workshop, SouthWest Writers, and the Tony Hillerman Writers Seminar, and regularly speaks at mystery conventions. He was toastmaster at Left Coast Crime in Santa Fe, NM, in 2011. He served two years on the national board of Mystery Writers of America and twice served as an Edgar Awards judge. He’s also a member of International Thriller Writers and SouthWest Writers.

A graduate of the University of Arkansas–Little Rock, Brewer worked as a daily journalist for twenty-two years, then wrote a weekly syndicated column for another decade. The columns produced the material for his humor book Trophy Husband. Find out more at Amazon and his blog.

KRISTEN TSETSI: You finish a first draft of a novel in about three months. That seems fast to me, as someone who takes at least six months and at most a year to finish a first draft. What is your first-draft method? Do you create an outline? Follow a reliable formula?

STEVE BREWER: After I dream up the initial story idea, I do an outline of the plot. One paragraph for each chapter. The outline for a three-hundred-page book is usually about twenty pages. Once I’ve got that clothesline to hang things on, I start writing the first draft, trying to produce thirty to forty pages a week. I intentionally go fast, trying to capture the flow, and then spend six months on the revisions.

Imagine a desolate world in which only one book from every author is allowed. This is the book that will represent you forever. Which single book of yours do you save, and why?

It’s got to be Lonely Street, my first novel and the one that was made into a 2009 movie. Lonely Street introduced bumbling private eye Bubba Mabry, who has since appeared in eight other books.

While writing Lonely Street, I was already thinking of a series. Bubba Mabry is such a likeable character, despite his many shortcomings, that I thought readers would want more. He’s a goof, a bumbler, but he’s also human in a time when too many good guys come off like superheroes. Plus, he’s funny as hell.

After a few Bubba books, I started doing standalone mysteries as well. Those are my main focus these days—books about crooks with a different cast of characters for each. Bubba is told in first-person with lots of recurring characters. It’s more fun for me to make up a whole bunch of new people and to jump from one character to another as the story unfolds.

When you made the switch from mystery to crime, your agent persuaded you to adopt the pen name Max Austin. Joyce Carol Oates, to explain her submission of the novel Lives of the Twins under the pen name Rosamond Parker, writes in a 1987 New York Times essay, “There is the possibility, however quixotic, of making a fresh start—in [Romain] Gary’s words, ‘renewing’ oneself—and not being held to severe account for it.” Have you experienced a fresh writing start as Max Austin, whether in the freedom to use a new voice or an opportunity to not feel beholden to a style, genre, or approach Steve Brewer’s readers might expect?

Because I started writing these novels before I had any sense of Max Austin, I didn’t really get that sensation. Instead, I felt the pressure to pull together three disparate storylines into a fourth book in a way that made sense. That one, not under contract yet, is called Duke City Heat.

And, actually, the pen name happened the other way around. I was writing these standalone novels set in Albuquerque, each starring a different cast of crooks, and my agent suggested we shop them around under a pen name. When Random House/Alibi picked up the books, they kept the pen name and marketed the books as a trilogy.

Also, I don’t consider myself having made a “switch from mystery to crime.” It’s a continuum, and all my books have elements of mystery and suspense. But I did decide, a few years ago, to specialize in books about crooks. I always find the bad guys (no matter how foolish they are) to be more interesting than the good guys.

I’ve been trying to write fiction for nearly thirty years now, so there aren’t many problems I haven’t already encountered. That gives a writer a confidence, I think. The biggest challenge always is boiling the story down to its essential elements. I try to name that tune in as few words as possible. As Elmore Leonard said, “Try to leave out the parts that people skip.”

When I started writing fiction at age thirty, there was a huge learning curve. I’d been a journalist since I was eighteen years old, and all I’d learned about writing there gave me a leg up over most people who are just starting out, but I still didn’t understand dialogue and pacing and dramatic structure. I did, however, know the value of rewriting. That’s where the game is won. With practice, I got better at first drafts, but I still do seven or eight revisions before I show a new manuscript to my agent/editor.

I write in scenes, and I always try to come in late and get out early. That is, I trim away the throat-clearing at the beginning and the wrapping-up at the end of each scene. You usually don’t need them. Just give the readers the dramatic parts. So, mostly I trim stuff. Sometimes, I go too far and have to put stuff back.

In October 2013, you wrote a blog post that was optimistic about the pen name Max Austin. In February 2015, you wrote, “I wish now I’d fought to publish under my real name.… I’ve published two dozen books under my own name and developed a small following, but that hasn’t yet translated into sales for Max Austin. In some ways, it feels like starting over after more than twenty years in the business.” Have you considered reclaiming Steve Brewer, and what would it mean professionally if you did?

I’m waiting to hear whether Alibi will want more titles in the Duke City series. If so, I’ll continue to be Max Austin for a while. Once I’m done with Alibi, however, I’m going back to my own name for all my books. It’s important to sales of my backlist.

You maintain a blog site under your real name, and when I searched, I couldn’t find a website for Max Austin. This is what I did find (which had me craving wine before I’d even had lunch):

Have you received any pressure to put more marketing efforts behind the Max Austin name? And is your Goodreads bio, which begins, “Max Austin is the pseudonym of writer Steve Brewer,” a way of raging against the pseudonym?

I think my publisher distributed that tagline, so there was no rage involved. I’m happy for people to make the connection between Max Austin and me. I’m very proud of the new books. That said, I didn’t want to build a website for a brand that is likely to be temporary. Now, if my publisher wanted to build such a website …

In June you gave a lecture, “How to Screw Up Your Writing Career,” during which you discussed the seven deadly sins of writers. Starting with the beginning of your fiction-writing career, what were a couple of your biggest screw-ups, whether or not they’d fall into the “deadly sins” category?

I changed agents too many times, trying to find a champion, before I figured out that you have to be your own champion. Like most newbies, I was in too big a hurry to show my stuff to agents and publishers while I was still learning the craft. I wrote two very bad books while learning. My third attempt at a novel (never published) landed me an agent. My fourth attempt was Lonely Street.

How did having Lonely Street adapted to film affect (a) immediate book sales and (b) your overall writing career?

Sad to say, it didn’t make a lot of difference in either. The movie looks good on my bio, and Lonely Street remains in print, but otherwise I’m just limping along like everyone else.

Many writers fantasize about not only publishing a book, but about having their published book become a movie. How did Lonely Street happen and what was that like?

A young moviemaker named Peter Ettinger, who grew up here in Albuquerque, wrote the screenplay and directed the movie. He was specifically looking for stories set in Albuquerque, and this was years ago, before Breaking Bad. It took years, but he got LS made. And I got a nice payday.

The years before the movie went into production were a roller coaster. I’d get word that some actor or studio was interested in the project, and I’d be bouncing around the house. Then that was out, and some new actor would be interested. More bouncing. I finally learned that this is the way Hollywood works. Everybody is an optimist. This was a good lesson in dealing with other producers who have optioned my non-Bubba work over the years. I’m pretty calm about it all now.

When LS finally got made, I spent a couple of days on the set in Los Angeles, and it was a lot of fun to hang out with the actors and the crew and the technical people. Everyone was very nice to me, and I ate way too much of the free food that floats around a film set.

Peter and the producers got cross-wise during the editing process, and they forced him to add some slapstick stuff that he (and I) didn’t like. The movie did the film festival circuit, then in 2009 went to DVD, where it’s still available. The lack of a wide theatrical release was disappointing, but you won’t catch me complaining. I know lots of authors who’d like to get Hollywood’s attention. I’ve been lucky.

Peter and I stay in touch, and he would like to make others of my books into movies one day. Fingers crossed.