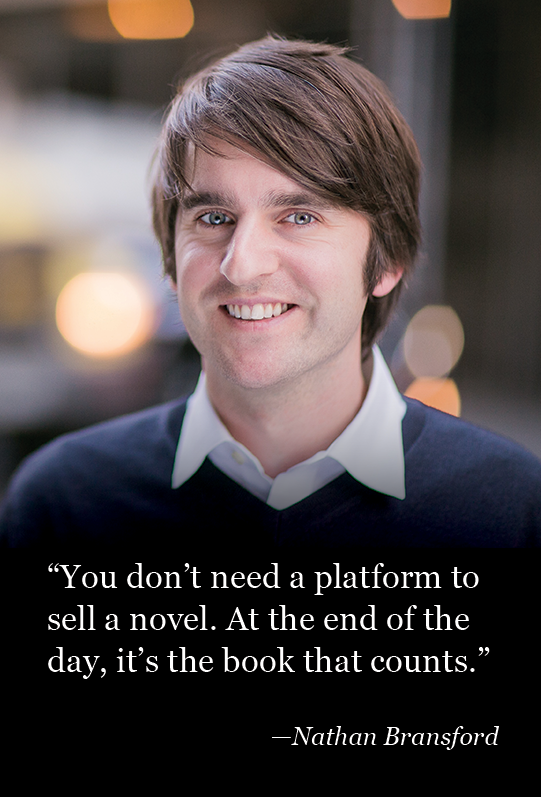 In this 5 On interview, Nathan Bransford discusses (among other things) the ongoing emphasis on author platform, publisher and author marketing responsibilities, and in what way being a literary agent influenced his writing.

KRISTEN TSETSI: You ask your readers in one of your blog posts whether they would choose to have commercial success (and make “bazillions of dollars” from their writing) or win a major award and be widely respected (but make very little money). Which would you choose?

NATHAN BRANSFORD: It depends on the day, but I think I’d go for mass appeal rather than critical acclaim. I’d rather a large number of people like my book than a small number of tastemakers.

Before writing Jacob Wonderbar and the Cosmic Space Kapow, you’d written another novel you said didn’t work out. Was it also a middle-grade novel—is that the genre you’ve always automatically gravitated to as a writer?

How did your experience as a literary agent influence how you write? Do you think about editor reactions and marketability as you’re writing (and write to those concerns), or are you able to be fully and freely creative?

Being an agent definitely influenced me, but probably in the opposite way people might think. Because of my experience I knew to not worry about editor reactions and marketability, because you can’t predict what people will think about your novel, and you certainly can’t predict what the trends will be a year or two in the future while you’re writing a novel. All you can do is to write the best novel possible and let the chips fall where they may.

You’ve said, “There’s that old saying: ‘I don’t like writing, I like having written.’ I’m definitely one of those types of writers.” I recently used that Dorothy Parker quote myself in “Writer’s Lament: O’ Writing!,” as an illustration of writing having become, for many, a special kind of torture.

It’s something we probably don’t anticipate when we start out—when writing is still (and only) fun, creative, freeing, and an invigorating use of the imagination. When did it become, for you, not a purely entertaining activity, but instead, “I don’t like writing, I like having written?”

I wouldn’t say it’s always torture, and I do think writing a book is fun on the whole; it’s more that, at some point when you’re writing a novel, the initial heady rush that greets a new project will wear off, and it eventually starts to feel more like work.

That usually hits me when I’m fifty to seventy-five pages in, where it starts getting hard to keep the plates spinning and I start confronting some of the serious challenges that come with an interlocking plot and pushing things forward. It gets hard and challenging (especially the editing—oh the editing, MY GOD, THE EDITING!), but it’s so gratifying when it’s finished.

I’d like to use your own blog against you again. Melissa Grey (@meligrey), author of The Girl at Midnight, outlines in a guest post on your website the five things she learned while writing her debut novel. What five things did you learn while writing Jacob Wonderbar?

One of the first pieces of advice industry professionals like to give writers, as if it isn’t a given, is “First, write a good book.” The lesson: the writing is the thing. Is it fair, then, to insist that authors be or become active on social media when some of them, if not many, may not be good at it?

It can probably be argued that a good book will sell with or without the author’s social media presence, but one might also argue that those who aren’t good at social media could actually lose a sale here and there, or alienate potential readers. “Gee, I was going to buy The Lovely Parade, but I looked at the author’s Twitter feed and the guy is a snooze.”

It behooves all authors to think about what they can do to help sell their book. That has always been the reality of the book business—some of the most beloved authors in history also happened to be fantastic self-promoters.

That said, social media is just a tool; it’s not the be-all and end-all. Instead of trying to do every single thing to promote your book and not doing any one thing well, do what you like the most and you’re best at. If you’re great at social media, then do that. If you’re a great networker, do that. If you have media connections and can generate attention that way, do that.

All authors need a web presence, and I think, given the time involved, social media has significant bang for the buck. But at the end of the day, it’s your book and it’s your life, and you don’t have to have a Twitter account. Do what you think is best.

One of the growth areas you’ll find here [in traditional publishing] are no-advance deals and digital-only deals that offer a low advance, if any at all. Such arrangements reduce the publisher’s risk, and this needs to be acknowledged if you’re choosing such a deal—because you aren’t likely to get the same support and investment from the publisher on marketing and distribution.

What’s the least an author can or should expect, even in these not-so-good-case scenarios?

I hesitate to make any hard and fast rules because everyone’s situation is different. But ultimately you have to decide what’s the right course for your book.

We hear a lot about writers being rejected by agents, but obviously agents are also rejected by publishers they hope will accept the work. Will you take us through what the process was like for you (or is like for an agent) to sell a book that took more than one communication with a publisher? Did it start with an email, a phone call, lunch? And where did it go from there?

The lunches and networking are ongoing. It helps to get a sense of editors not just in terms of their taste but also as people, so you can get a sense of what they might like. I had a huge spreadsheet with every editor in publishing with the genres they edited and what they were like as individuals, which I consulted when drafting submission lists. Whenever I had lunch with an editor, I would update it with that information.

Every book was different, but I’d come up with a submission plan and generally email editors the book and pitch letter, and then follow up with whomever I didn’t hear back from.

Hopefully you have a quick offer, but if not you move down the list of editors.

Publishers want authors to have a platform. It stands to reason, then, that agents will also want authors to have a platform. Would a fiction writer without a niche-market message (and, therefore, probably without the same kind of platform a nonfiction writer might have) simply add in the bio section of the query letter, “I have a Facebook account with X number of friends, a Twitter account with X number of followers,” etc.? If the numbers are low, is it better to not mention the accounts at all?

And what if a writer has instead managed to prove a different promotional skill, such as writing and sending press releases and securing interviews and book reviews? Should that be included in a query? Would it be valuable to an agent and/or editor?

I think it’s really important to think of a platform beyond social media and not to overthink it when it comes to fiction especially.

A platform is a rough combination of your authority as an author (whether your expertise or your credentials) and the number of eyeballs you can summon to read your book to give it an initial boost. That doesn’t have to be through social media. If you have a fan base through some other platform, if you are well-connected, if you are active on a conference circuit, a platform can take many forms.

But you don’t need a platform to sell a novel. You really, really don’t. It can help, but at the end of the day it’s the book that counts. That’s not a platitude, it’s really true.

So yeah, if you don’t have a platform, don’t try to convince an agent you have one, and don’t apologize for not having one. Just pitch your book.

And if you do have a platform, mention it, but don’t belabor it. The book is still by far the most important thing.

It’s not that advance copies can’t work, I just don’t know that publishers always think about them in a strategic way for each individual book. I’ve heard horror stories from authors where their publisher basically sent out 100 advance copies to their same old advance copy Rolodex and called it a day.

Russ Grandenetti from Amazon had a great quote in a New Yorker article last year where he basically said that in an era of self-publishing and book abundance, it’s the publishers’ job “to build a megaphone.”

In the old bookstore world, it made sense to focus your marketing activities around a few books that were at the front of the store (which publishers pay for), to secure reviews (i.e., sending out advance copies), and to essentially take a flyer on the rest of your list and drop them into the ocean to see what happens. But now, with the Internet and e-bookselling, publishers are competing against all media, and without a physical bookstore, book buying is no longer a zero-sum activity.

I don’t have all the answers when it comes to marketing, and there are some publishers who are doing some interesting and innovative things, but it seems to me that publishers could do a better job of utilizing their brands in an era where being a traditional publisher is a true differentiator. Instead, many of the major publishers are divided up into myriad imprints that don’t mean much to consumers.

And ultimately it’s a mindset shift. I’m not sure I understand why publishers would acquire books they don’t intend to market well. Authors can’t do it all.